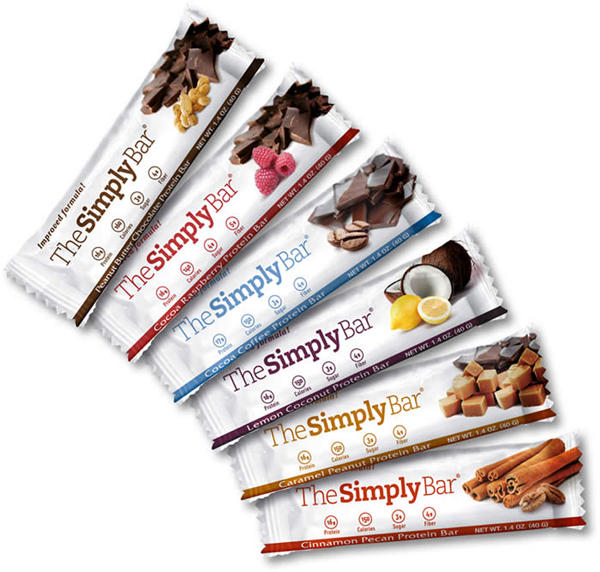 Good For You Review

Canadian consumers are increasingly searching for quick, “grab-n-go” snack options that will not derail their healthy eating habits. Sales of protein and energy bars have increased tenfold in the past decade and marketing experts expect them to reach a staggering $93 million in Canada by 2014. Fuelling this trend is the public’s general perception that these snacks are genuinely healthy – but ARE they?  Not necessarily. Many of these bars are little better than candy bars when it comes to nutrition. They’re full of refined sugars, low quality proteins and an assortment of taste-enhancing fillers.

That’s why I was intrigued when the kind folks at Wellness Foods Inc. sent me several samples of “the Simply Bar”, a bar touted to contain more protein and fibre and less fat, sugar and calories than similar bars on the market. The bar’s basic ingredient list: soy crisps (from non GMO soy protein isolate) tapioca starch, salt, organic brown rice syrup, inulin, (from chicory root fibre), vegetable glycerine, and natural flavourings certainly sounds healthy enough doesn’t it? The overall nutritional analysis of these bars reads very well too. They ARE lower in calories and sugar than most other protein bars and they DO contain very respectable amounts of protein and fibre.

So why did the Simply Bar not warrant a higher score?

As a nutritionist, I have no problem recommending people include whole soy foods in their diet. Foods containing “fractionated”, isolated, processed soy however, leave me cold. Here is why. Whole soy foods contain hormone-like substances called phytoestrogens – plant compounds that can weild a very slight, harmless estrogenic effect within the body. However, when soy proteins are isolated, these compounds become highly concentrated, and the resulting effect on the human endocrine system, much debated in the scientific community, has not been clearly established. In addition, the processing of soy is something I question. To make soy protein isolate manufacturers de-fat soy, then mix it with a caustic solution to remove the fibre. This mix is then washed in an acid solution to isolate the protein into “curds” which are then dipped into another alkaline solution and spray-dried at extremely high temperatures. Does that sound healthy to you?

My next issue with these bars is the addition of inulin. Inulin is a carbohydrate belonging to a class of compounds called fructans. These substances do have some substantial benefits, acting as prebiotics in the gut, meaning they feed your gut’s “good bacteria”.  However, there is evidence to suggest they may also feed its bad bacteria, like Candida Albicans. Moreover, many people find inulin and other fructans difficult to digest as they can cause intestinal cramping and bloating in folks sensitive to fructose.

Ok, so we’ve established some of the ingredients in The Simply Bar may not be as healthy as they sound.  What about the bar’s taste and texture?  Overall, I was generally pleased with both. The standout flavour for me was the maple pecan, a surprisingly rich tasting, almost buttery bar that was akin to a sophisticated rice krispie square. For $2.79 per bar though, I did find them rather small and given my other, previously mentioned concerns, I cannot recommend The Simply Bar outright.

My take home message: If you want a quick, healthy, soy-based snack, some roasted soy-nuts mixed with dried fruit would be a much better option than these bars. I recommend reserving them for those rare times when stress has you unorganized, frazzled and in dire need of some convenient, tasty, grab-and-run protein.

The article on L’Apéro in the May|June issue should have stated Chef Andrea Maiolo staged at The Courtney Room and Zambri’s and that he held the ...
Read More
May|June issue on the stands. Read ...
Read More
I sat down to lunch this week with Bernard Hickin, Chief Winemaker for Jacob’s Creek. This successful and widely exported brand (50+ countries) is ...
Read More