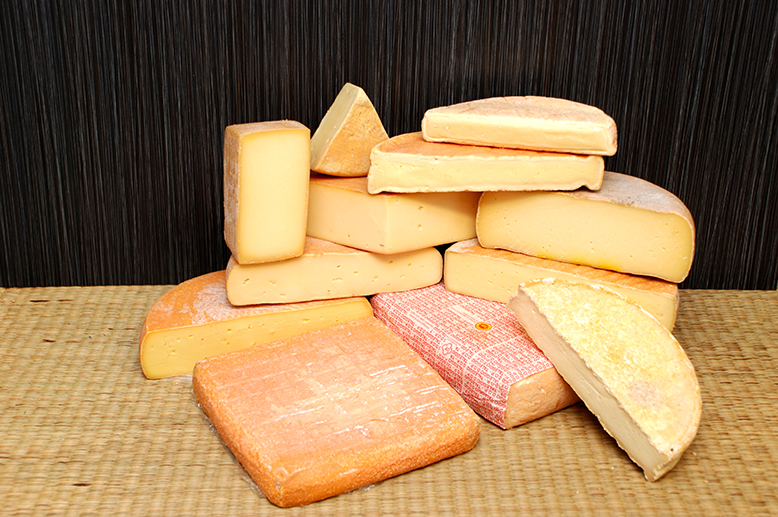 You’re at a party, there’s an amazing spread of meats and cheese just waiting to be devoured, when BAM! You’re struck in the face with a smell worse than Grandpa’s breath after kippers and coffee. Then you see it, the slimy orange blob on the cheese board. It glistens slightly as the paste goops out of the rind, spreading its fury for all to smell. You stare in horror as somebody swoops in and generously loads a cracker, devouring the whole thing—willing and pleasingly, in fact. You consider being brave; you almost pick up the knife. But instead you move on to the safer options. Brie or Gouda, your old and trusted friends.

Enough! No more fear about the beautiful world of stinky cheeses. Many of us have been taught from a young age that stinky cheese is our enemy. Does the Stinky Cheese Man ring a bell for anybody? That book had me running from funk since Grade 3. Thankfully I have moved on from my fears of stinky cheese, and have instead embraced the myriad of mould and funk that greet me every day. I do think it’s about time everybody else does too!

Washed rind cheeses are just that: washed. The rinds are gently washed or brushed with a salty brine of water, whey, wine, or beer. The moisture breeds good, tasty bacteria, so the more the cheese is washed, generally the stinkier it gets. This method was introduced by monks who would produce cheese, beer, and wine to sustain them and raise money for the monastery. The monks had to abstain from meat, so they developed this method to replicate the flavour in cheese, their main source of protein. It was also proved as a method of preservation, with the good bacteria warding off the bad. Even today, many cheeses are still made by these monks, dedicating themselves to the old-fashioned art.

The funk level can range from very mild (Oka, the readily available gateway washed rind cheese) to biting your nose off wild (Langres, a wrinkly cheese with a dent in the middle to be filled with champagne, just before eating). On the mild spectrum of things we have the Alpine cheeses (Gruyere, Comté, etc.), which are only given light brushes. The resulting rinds are a light orangey-brown and only release a faint footy smell (Interesting side note: the rinds of washed cheeses share a bacterium that is also found in human sweat—they are literally footy!). And then there is Epoisses. So stinky it needs a box just to contain the smell. No, I kid. It does have its very own box but it is simply so fragile it would never keep its shape without it. Epoisses de Bourgogne is one of the most well known cheeses in the world, one of the reasons for that is it’s slick, deep orange, stinky rind, and also because it’s just freaking awesome. It literally runs out of its rind like it’s been heated to molten temperatures.

The magic of washed rind cheese comes as you dig in under that rind and are greeted with a big and meaty paste, sweet and savoury and amazing. Don’t be fooled, the funk is definitely there; there’s no denying that. Honestly though, it’s not as bad as your nose leads you to believe. A stinky cheese almost always smells much stronger than it tastes. So go out there! Be daring and march up to that stinky cheese daunting you from across the room. If it proves to be too much, try it without the rind—much of the funk rests there. Fruits, nuts, and jellies are also great to stand up to the bite and mellow it out a bit. Try them with beer, cider, or sweet wines.

For those of you who are inspired to expand your palette, here are some other readily available (and approachable) cheeses waiting to bring out your smelly side:

So get in there, ask to taste a washed rind cheese at your local cheese shop, or scoop a big serving at your next cheese extravaganza. Happy tasting!

For the ninth year in a row Rancho Vignola is setting up its Vancouver Island Harvest Sale here at the Mary Winspear Center in Sidney. Many of ...
Read More
Season’s Greetings EAT readers! We at EAT are looking forward to all the wonderful seasonal baking on offer around the city. One of the great joys ...
Read More
Masterclass Candied Citrus Holiday ...
Read More
November | December issue on the stands. Read ...
Read More
Hard sauce can be purchased pre-made, but it is extremely easy to make at home. The recipe below is adapted from the one my mother used (from the ...
Read More