Cory Pelan and Geoff Pinch are curing, drying and smoking in a new Oak Bay establishment. 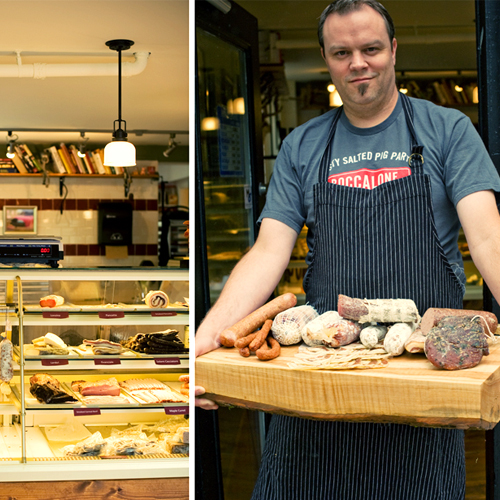 Cory Pelan at the Whole Beast. Photo by Rebecca Wellman

Some months back, Cory Pelan gave up his post as chef at Victoria’s La Piola Ristorante to turn working solely with his “meat nerd” side. (Even when he was chef, he would spend his Sundays off drying and curing.) The Whole Beast finally opened its doors June 28. The new salumeria fits nicely into the same retail site as the Village Butcher in Oak Bay. That makes meat shopping a breeze for the locals, who are thrilled with the new neigbourhood addition.

Salumi is to the Italians what charcuterie is to the French. However, instead of pork-based patés, hams, sausages, rillettes, etc. Italian salumi relies on the cow as well as the pig for cured and air-dried meats. But both cultures incorporate the animal nose-to-tail.

Pelan is quick to emphasize his passion leans toward southern European cold meats. In that, The Whole Beast differs considerably from a charcuterie. Proof, shall we say, is in his product. There are pork salamis, three of which are flecked with fennel, lemon or four types of chile, and Fairburn Farm water buffalo salami and breasola. Porcine selections include lardo (fatback cured with rosemary and other spices), lonzino (air-cured pork loin, called lomo in Spain), and mortadella, of the same fine quality you would find in Bologna. My favourite, though, is the shop’s coppa di testa or trotter brawn as the English call it, and better known to North Americans as head cheese. The whole beast, literally, gets used for the delicate trotter brawn, including cheeks and ears. The jowls are removed, however, for guanciale.

Partner Geoff Pinch, a whiz with the smoker, gives a nod to more northerly climes with liverwurst, cabanossi (smoked sausage made from pork and beef and lightly seasoned) and various types and degrees of smokey bacon.

Native pine floors, distressed wood cases and chunky jars of homemade mustard, pickled vegetables (beets, carrots, beans), antipasti and sauerkraut echo the rusticity of the wares. Pelan is also making kimchi (a traditional Korean dish of fermented vegetables). “The idea came from Vancouver’s Japa-Dog. Just use it on sausage as you would sauerkraut,” he says.  Pelan and Pinch give Vancouver’s Rob Belcham a big thumbs up for helping them on their Whole Beast venture (and adventure).

Prosciutto lovers, and who isn’t, take heart (and heed). In another four months or so, they should have a steady supply on hand. “Six months aging is good, one year is ideal,” says Cory—testament again to his devotion to, well, The Whole Beast.

The article on L’Apéro in the May|June issue should have stated Chef Andrea Maiolo staged at The Courtney Room and Zambri’s and that he held the ...
Read More
May|June issue on the stands. Read ...
Read More
Do you find that you spend the entire week looking forward to the weekend, promising yourself you’re going to do something fun….only to find that ...
Read More