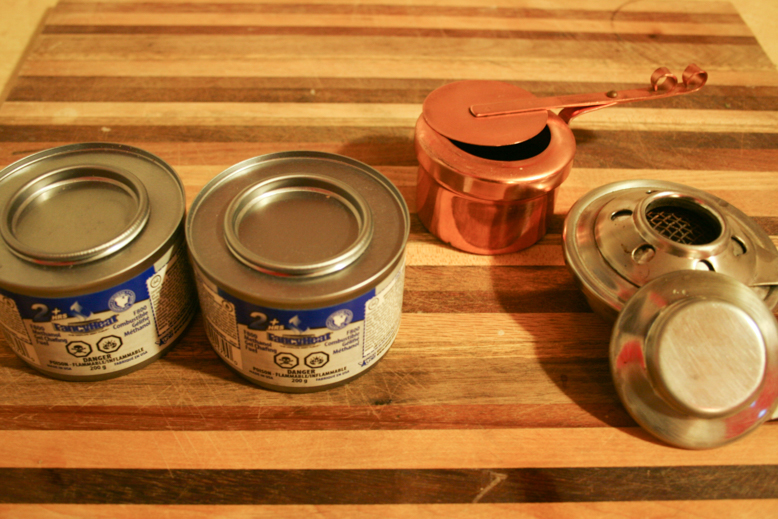 At 5:22 pm, in advance of a party that starts at 7:00, I am sitting in my kitchen and drinking a glass of Prosecco, trying to decide how things are going to go.  Fondue parties are a smashing, and terribly adult, type of thing to do in the winter when the weather gets cold.  It just naturally feels like it is the 1970s when one bubbles up a pot of cheese or chocolate for guests to dip into.  I have also, particularly when I had a Vietnamese roommate for a while, done an oil fondue where meat and vegetables are cooked on skewers that are left in the oil for a few minutes and then pulled out again.  While I’m not going to address the oil fondue here, it is a legitimately great fondue. 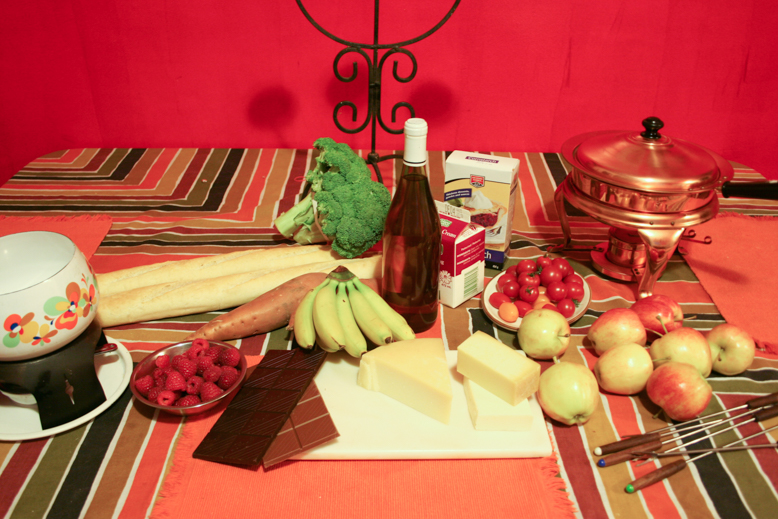 Part of what makes fondue so special is that it is a meal where everyone is sharing from and simultaneously caring for the same pot.  You will notice if you throw such a party that everybody will feel like they have a say in when and how the flame under the pot is controlled.  Some people feel very panicked about things getting too hot, and others are inclined to let things burn until the very last second.  Here is how mine went: 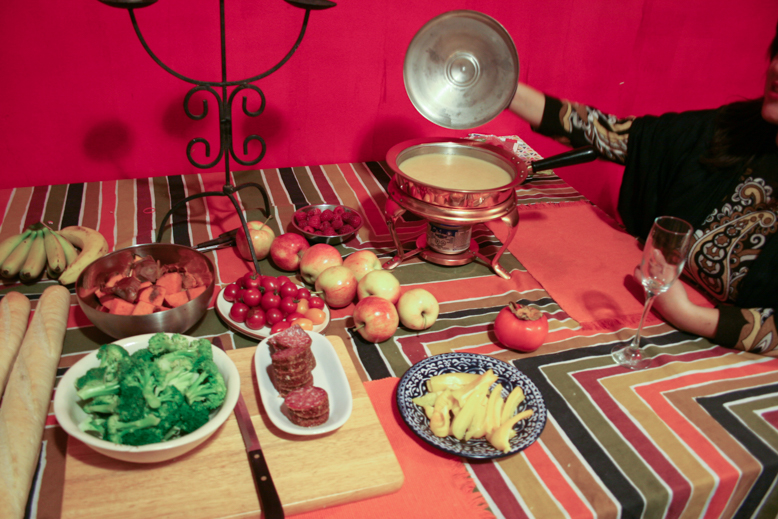 I began by going to the Little Cheese Shop and picking out a couple of good alpine cheeses.  As the fondue originated somewhere in the nexus of the Swiss, French, and Italian borders, the mountain cheese of that region are the most traditional choices.  Gruyere, Emmental, and Comte cheese are all excellent choices because they melt the right way and also provide a slightly nutty and creamy flavour for the things dipped into them.  For my own fondue, I chose about 200 grams of Gruyere and a similar amount of Nostrala.  Nostrala is a BC alpine-style cheese made in this case by the Kootenay Alpine Cheese company and modeled after an Italian Fontina. 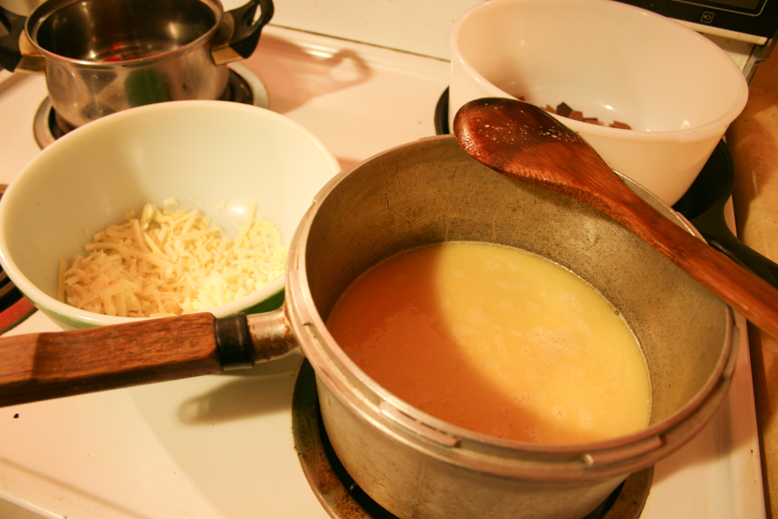 To make the fondue, I put a pot on my stove on medium low heat and I poured in a half cup of wine.  I was using more of that rosé someone gave me, but any white or rosé would do the trick.  I think red would be too heavy for a fondue.  I had already grated the cheese and mixed into it two tablespoons of cornstarch for thickness.  The trick to making the fondue creamy is to stir while slowly adding grated cheese into the pot, moving back and forth between wine and grated cheese to achieve a perfect consistency – until all the cheese is added.  You will know you are on the right track when the cheese is coating your wooden spoon like a creamy sauce.  The point is that whatever is dipped into the cheese ought to come out with a layer of cheese surrounding it.

I was keeping things very simple, to let the flavour of the cheese speak for itself.  Some people do add spices.  I rubbed a garlic clove on the inside of my fondue pot, and added a little lemon juice, too.  When the cheese is ready, transfer it from your stove into the fondue pot and set it on the table with a flame under it.  Keep an eye on the cheese and see that it doesn’t burn on the bottom or bubble too much and separate.  Your guests will help you with this by bringing it up every ten seconds or so.

You can dip pretty much anything you like into a fondue.  I used sliced up baguettes, cherry tomatoes, roasted yam pieces, lightly steamed broccoli, pieces of pepper salami, and chopped sweet peppers, among other things. 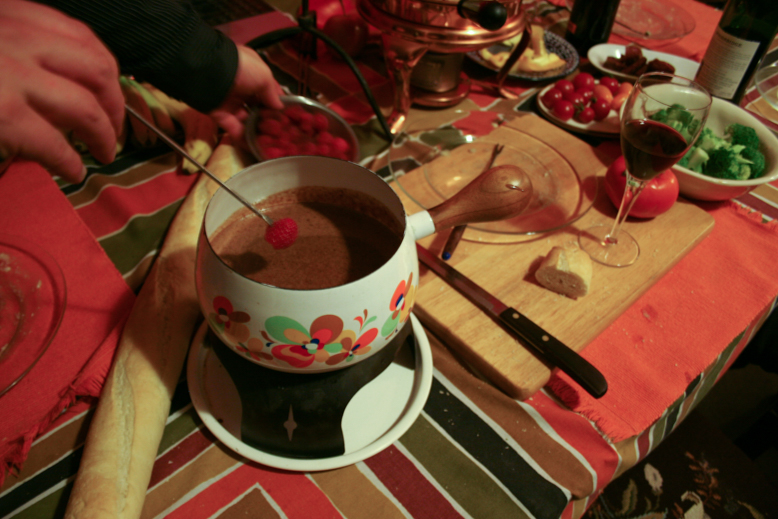 Because the cheese was not enough, I bought three 100g Lindt chocolate bars, two dark and one milk chocolate, for my chocolate fondue.  With a chocolate fondue, the secret is to break up the chocolate as much as possible and then set it in a baker’s bowl.  Then, warm up a container of heavy cream (473ml, for example, would be enough) to the point where is it almost boiling, but not quite.  Then gradually add the warm cream to the chocolate and mix them so that the chocolate stays thick enough to coat things.  I was having a small party, so I didn’t use much cream and chocolate.  I also added a half shot of Baileys Irish Cream to my chocolate sauce.  Once again, once the mix is ready, transfer it to a fondue pot and put a flame under it.

The flame on the chocolate needs to be much lower, because chocolate will burn easily.  Any sort of fresh fruit is great with chocolate.  We used raspberries, apples, pears, mini bananas, mangos, and even a few small bites of sweet cake.  One person even suggested we put broccoli into the chocolate, which was not too bad, actually, but you don’t have to go there.

Many sets come with burners already included underneath.  These burners are the best because they allow you to control the level of the flame. If you do not have the usual burners, you can buy cans of jellied fuel quite cheaply at any cooking store.  These work less well in that the flame can’t be controlled easily, but they do work.  Whatever you do, remember that fondue fuel burns very hot and sometimes the flames are not visible.  Use your common sense as well as caution, and have a great time trying out fondue!

With Phase 2 beginning, restaurants and patios, tasting rooms and coffee shops are reopening. This is an ongoing process, with many changes, so we ...
Read More
With winery roots firmly planted at Naramata’s Elephant Island Orchard Wines, Miranda and Del Halladay have proven their unconventional wisdom with ...
Read More