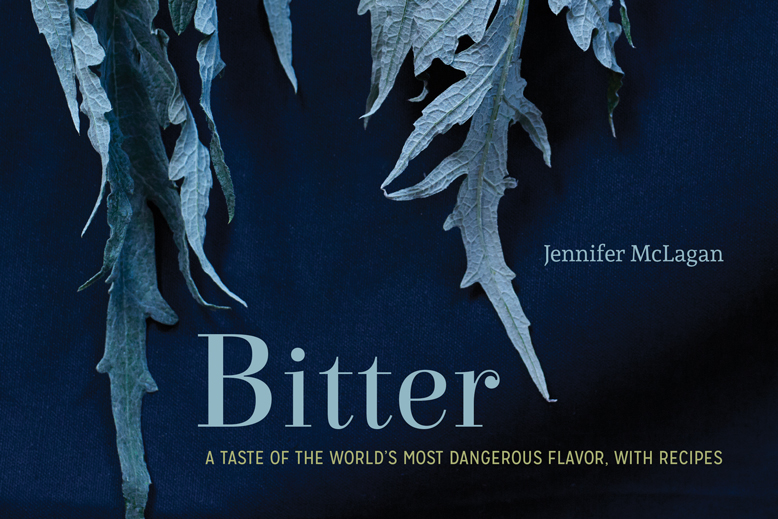 On a recent grey and rain-filled Victoria morning, I met cookbook author Jennifer McLagan during a stop-over to promote her newest book Bitter: A Taste of the World’s Most Dangerous Flavour and to find out why she chose to write about the most difficult, challenging, and demanding of the five basic tastes (the others are sweet, sour, umami, salty and bitter.).

“I think it’s such an interesting taste that people have thought they wanted to get rid of,” says McLagan. “It’s really important that people keep that bitterness in their food. It gives a dish that little something—a bit more complexity, depth, and interest, and without it the dish would be a lesser thing.”

While other cultures embrace it, bitterness is not a taste North Americans have historically sought out. Instead, we tend to love our salt and our sweets; sour has its advocates who swear by their lemon tarts and kombucha; and everyone loves the savoury taste of umami, but who actively searches out bitter foods?

Ever chew on an aspirin, or take a big slurp of the intensely bitter Italian digestif called Fernet Blanca, or see a small child screw up their face when they taste something —that’s the taste of bitter. Our sensitivity to bitterness is built-in, genetically coded to signal toxicity and danger in foods, and it’s only over time that we have learned to love bitter flavours. Bitterness is usually an acquired adult taste and McLagan thinks it is finally getting its due.

Here on the west coast, a case can be made that our tastes are maturing and moving away from the sweet/salty/sour triumvirate. Think of those macho, high IBU, double IPA beers we drink, our steady love affair with coffee, and 85% cacao dark chocolate bars. In the last couple of years, even the mildly bitter Brussels sprout is having a moment and seems to be on the menus of almost every restaurant doing inventive cooking up and down the west coast.

While a food like the bitter melon eaten in parts of Asian is probably too bitter for our palate, others, such as lemon zest, rapini, and beer, are acceptable. For the novice bitteree, McLagan says, “Bitter flavours will come through in a salad with greens like arugula or frisée, or in a high quality olive oil, or in Italian vermouth in a cocktail. But you can also do wonderful things with bitter vegetables—braising radicchio or roasting Brussels sprouts with bacon. Fat helps tame bitterness better than sugar. Fat and bitter are two things that belong together. Find the balance. Don’t try to knock the bitterness out. Bitterness is one of the most nuanced of the basic tastes.”

I’ve brought a copy of Bitter with me and I ask McLagan to talk a bit about her approach to the recipes in the book.

“I think these recipes might be more approachable than those in my other books. In the past, I may have been criticized for doing lamb testicles or frying in duck fat. I don’t apologize for including cardoons (a thistle-like plant) because I like cardoons and, if you can find them, this is what you can do with them. You don’t need to be any kind of chef to cook with this book, but I don’t ever dumb my recipes down; I don’t believe in that, because sometimes you have to work at it. Then, I’m all over the place with the recipes, such as pork chop with cassis and coffee, and tobacco panna cotta—which the Americans think is so outrageous.”

“The best caramel is the caramel that you cook to just the point of smoking before it burns. You create so many complex chemicals. That’s what bitterness does.”

Bitter: A Taste of the World’s Most Dangerous Flavour is divided into six chapters with names like Born to Be Bitter, Subtly Bitter and Dark, Forbidden, and Very Bitter. The recipes range from easy to confrontational; from Bratwurst in Beer and Brussels sprouts with Bacon to Bitter Melon with Pork and Radicchio Pie. Browsing through the pages, I find simple recipes like how to make a granita with Campari, or an arugula pizza, or a Gorgonzola cream sauce for pasta with bits of chopped radicchio. One that caught my eye was Braised Rapini with Garlic and Chile. Inspiration for the recipes came from McLagan’s travels, restaurants, and from long-standing favourite recipes in her repertoire.

I ask about the Toast Soup on page 222. McLagan first had it at the 3-star restaurant L’Astrance in Paris. “He [the chef] has this soup on the menu. It’s like a really old peasant dish with leftover bread. You need to toast the bread really well—the toast needs to cook until it just starts to blacken around the edges—and use very good bread like a Poilâne.”

However, Bitter is not just another recipe book; McLagan likes to tell stories, to explore history and culture, and to delve into sensory experience. Interspersed among the recipes are absorbing discourses on the likes of the Tongue Map, Phytochemicals, and Smelling Taste. “There are also pieces of poetry, quotes, flavour profiles, and relevant bits of literature that I think makes the book much more interesting than a bunch of recipes, no matter how interesting those recipes are,” she says. “I’m not writing for the general population, but for the person who likes to cook and who is interested trying something new.”

Has your interest been piqued? Take a chance. Explore a little and open a whole new world of bitter with McLagan’s fascinating book.

Bitter: A Taste of the World’s Most Dangerous Flavor
Harper Collins
$39.99

The evening started with McLagan handing out small pieces of paper that were impregnated with an edible bitter chemical. We were told to put the paper in our mouths to see how long we could stand the bitterness before we had to spit it out. Interestingly, some people had no problem with the bitterness while others spit the paper out quickly. This little experiment illustrated how we all react to bitterness with various levels of sensitivity.

Once we were seated around the long wood table, we sampled the first dish—simmered white asparagus with olive oil and orange zest. It was a good introduction, as it was only mildly bitter. This was followed by a plateful of grilled radicchio that tested our tolerance. I found it very bitter and was unable to finish it (although most others cleaned their plates). Showing how other flavours help balance bitterness, this dish was deftly tempered with Little Qualicum Cheeseworks Bleu Claire, hop-candied pecans, and a balsamic vinegar reduction that had a touch of sweetness.

The third course brought a chicken breast with horseradish butter and mashed rutabaga—the bitterness well within the levels I’m most comfortable with. Inspired by the book’s introduction, where McLagan describes how a half grapefruit sprinkled with sugar was part of her childhood breakfasts, dessert was a grapefruit and orange fruit salad with a citrus fruit jelly and a Campari and Aperol dressing.

Cocktail pairings included a Vesper martini made with both gin and vodka, Lillet and lemon peel; a drink with Suze, a French brand of bitters flavoured with the roots of the plant gentian (an intensely bitter herb), and a refreshing cocktail made with Aperol, Salt Spring ale, Prosecco and soda.

The article on L’Apéro in the May|June issue should have stated Chef Andrea Maiolo staged at The Courtney Room and Zambri’s and that he held the ...
Read More
May|June issue on the stands. Read ...
Read More
Most people I talk to have never heard of Kefir. I myself had not until I visited my cousin Sandy and her husband Don in the early days of summer ...
Read More