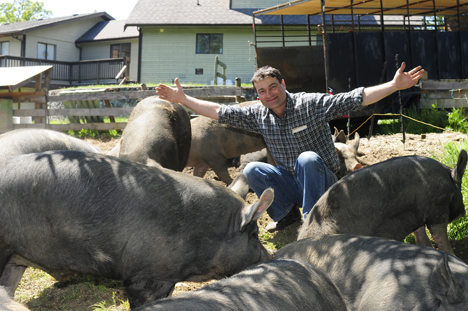 “Everything I said is bullshit” is Tom Henry’s final remark of our interview. This modest dismissal of his pearls of wisdom galvanize his addition to EAT’s “local heroes” list. Make no mistake, Henry has pulled off some heroic deeds for Vancouver Island’s local food scene, but he’d be the last to gloat about it (so we’ll do that for him).
Duncan-born and raised, Henry started out as a staff writer at Victoria’s Monday Magazine, then penned a handful of books (mostly about the West Coast lifestyle) before becoming co-creator and editor of Small Farm Canada. In Henry’s words, it’s a how-to magazine that leads farmers through the finicky business of building chicken coops, sheering sheep and plotting crops. But it thickens the plot with a few think pieces on, say, the re-evaluation of food miles or the politics of climate change. Add to this Henry’s opening editorial pieces, which lean toward the rambling, armchair philosopher vernacular (with more than a grain or two of true wisdom), and you have a noble little publication that farmers I know from Nova Scotia to Ontario refer to regularly. Nice work if you can get it, but throw in one more credential and here’s where Henry’s efforts sound downright, well, heroic; he’s also a farmer.
He’s a farmer who grows and supplies wheat to Wildfire Bakery in Victoria, True Grain in Cowichan Bay, plus a couple of independent bakeries in Vancouver. He’s a farmer who raises the extraordinarily flavourful lamb you taste in The Pink Bicycle’s burgers or pick up at local butchers. And if you bought holly at Christmas from Thrifty Foods, chances are it came from Henry’s farm. In other words, not only does Henry write about building a local food system, he’s doing it. So what does this guy, who grows the food, connects with the consumer, and then writes about the process have to say about Vancouver Island’s food system?
“The local food movement [on Vancouver Island] is like the Reformation,” Henry says. “Conventional agriculture is like the Catholic Church collapsing. Farmland is sitting fallow because people are leaving the old farms.” The old system has broken down, but Henry sees new ingenuity rushing in to fill the void. “There’s an ever-increasing number of vineyards on the island, small pig operations are popping up, new products like mead are being made, there are more berry patches, more agritourism. It’s a whole new kind of agriculture.” And, Henry tells me, meeting the new kind of farmers is a new kind of consumer. “Consumers are starting to ask tougher questions,” he says. They want to know how their beef was raised, what practices a vintner uses on her grapes, how the chickens that made their eggs live.
So what needs to be improved if Vancouver Island is to have a strong local food system? “We’re doing well on the producer and consumer ends, but in the middle the infrastructure is almost non-existent. There are a lot of middlemen—sheep shearers, veterinarians, heavy-duty farm mechanics, the people who run abattoirs—that have disappeared. They are the silent partners and there is a real urgency for them. A 55-year-old sheep producer on Salt Spring Island sells his flock and there’s no one there to take it on and that knowledge is lost. That’s how systems collapse.”
Small Farm Canada addresses some of these issues, and Tom Henry, who speaks at food security conventions, spreads the word in more ways than one. But at the end of the day (and the beginning and somewhere in the middle), it is probably his work on the farm that makes the most headway. In a recent editorial, he wrote, “In the curious bi-polar world I live in—magazine editor by day, small farmer by evenings and weekends—the magazine tends to benefit from the farm more than the other way around.” It’s one thing to preach about it, quite another to practice it. Living his message to produce and support locally, to make connections between the producer and the consumer, is what makes Tom Henry a real food hero.

The article on L’Apéro in the May|June issue should have stated Chef Andrea Maiolo staged at The Courtney Room and Zambri’s and that he held the ...
Read More
May|June issue on the stands. Read ...
Read More
This family owned winery produces small quantities of hand crafted, premium wines. Chris and Beata Tolley's small vineyard is located on the east ...
Read More