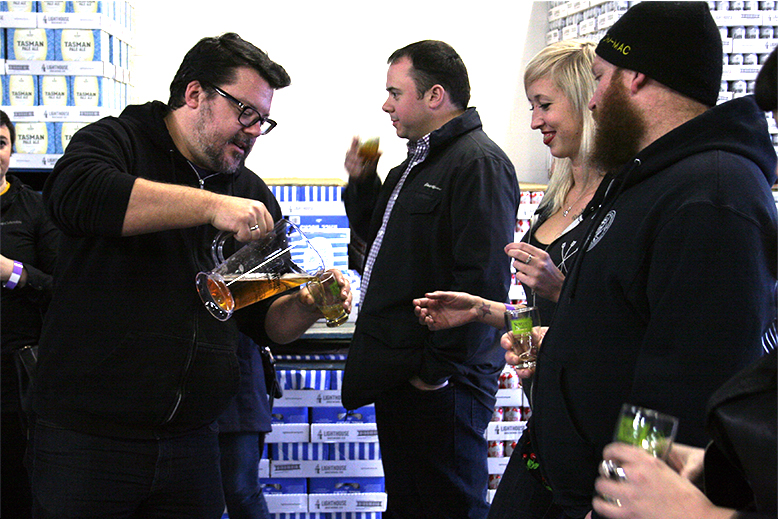 I’m now a veteran of the brewery tour, having done it last year, as well. I’m a veteran of brewery tours in general. I love feeling like an insider for a few minutes, as I stroll around between the vats, and tanks, and tuns. I also love hearing descriptions and histories of the beers themselves as they are poured by the people who actually brewed them.

We visited three local breweries this year, Lighthouse Brewing Company, Phillips, and Vancouver Island Brewery. Besides this, we went to a secret location and tried the brews of three smaller regional brewers: Steel and Oak, Bad Tattoo, and Salt Spring Island Brewery.

Lighthouse is always fun because so many people involved in the process come out and talk, and share stories about the brewery. They talk about hops, let us sample hops, and fill us in on their brewing processes. Lighthouse makes tasty beer in a wide variety of styles. We sampled some favourites, but a new one caught my attention: a coffee lager. This is a combination of a cold brewed coffee and crisp lager. I assume this would be an ideal breakfast beer.

At Phillips, I baffled the person at the taps by drinking heavy porter, then ale then lager…going from dark to light as opposed to the opposite. I explained that I’ve had so much beer this week, in such a random order, that my palate is entirely jumbled anyhow. I always enjoy Phillips Phoenix Gold Lager because its malty tendencies act as a good counter balance to the many hoppy beers I’ve had this week. We also got a look at Phillips’ all copper vintage gin still. Epic.

At Vancouver Island, I want to highlight the Mile High Winter Seasonal. The winter season is ending and so this brew is, I assume, going into hibernation for a while. There’s something nice about things that have seasons, as opposed to being available year round, at whim. Seasonality adds unique emphases to different periods of the year. It makes me look forward to things. Beyond all that, I’m always cheering for Vancouver Island. Even though they are the oldest players in the craft game here on the island, I feel like they don’t get nearly the credit they deserve for their material. They have some delicious beers.

Our secret stop was at Silver Arrow Cars. Here I had Salt Spring Island Ales’s Heather Ale, which uses Scottish heather as opposed to hops. Quite tasty. Bad Tattoo is a microbrewery in Penticton. Their offering was Los Muertos Cerveza Negra. It is a Mexican style lager (best served with lime) with a slightly darker profile, but still crisp taste. And, last but not least, Steel and Oak brewing Company from new Westminster, which an unusual and tart smoked hefeweizen. 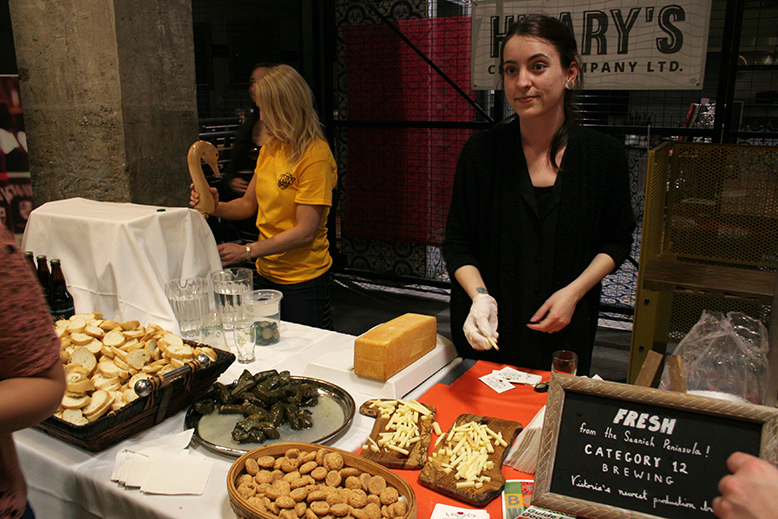 Beer and cheese are natural and age old companions. They are two types of fermentation that caught on in the Neolithic period and never left us. Both of them come in a countless array of flavour hues. The latest installment of the beer and cheese love in was last night at the Victoria Public Market. I was there, with my camera and taste buds, and I report to you now on some of my favourites.

Charelli’s best offering was the four year old Italian Parmesan wheel they had opened precisely for this occasion. There was also a very good Mimolette (de Gaulle’s favourite cheese, apparently), and others, but the Parmesan won the day.

Lots of cheeses have all sorts of bombastic flavour up front, but the real measure is how the flavour evolves as it sits on the tongue. The measure is how the impression of the cheese lingers. I’m still thinking about the flavour and texture of that cheese now, more than twelve hours after I ate it. It’s not just a bit of cheese, it is actually a psychological proposition in the form of food.

Hillary’s: Of course, I do like the in your face cheese, too. Hillary’s Red Devil Spicy Cheddar was definitely amazing. The cheddar was laced with jalapeno peppers, and lingered on the palate in an entirely different way, as a warm burn. This is a great combination to have with beer. I was having visions of fiery fondues as I devoured it.

Salt Spring Island specializes in soft goat cheeses (chevres). They had one station serving a wide variety, paired with different kinds of preserves. Exquisite. It’s hard to go wrong with a soft cheese, a little bit of sweet fruit jelly, and a good cracker. The basil infused chevre was one of my favourites.

Many beers these days have powerful, to the point of overwhelmingly strong, flavours. The leads to certain questions about pairing with food. My favourites of the night tended to be beers that had a slightly more subtle character to them, so that they acted as compliments to cheese, rather than washing the taste away entirely. Everything was great, but the two standouts for me were:

Salt Spring Island Ales “Golden Ale”. This is a crisp light ale. It has some hoppy taste, but it is not overpowering or bitter. It makes an excellent complement for food, because it doesn’t spoil the meal by talking over all the other flavours at the party.

Phillips Odyssey Nitrogen Porter: The nitrogen carbonation causes this porter to set like a proper beer of the British Isles. Like a Kilkenny, or Caffrey’s, the glass has to sit until it is clear before you begin drinking. It also should probably be served slightly warmer than other sorts of beer. p.s. it is delicious! 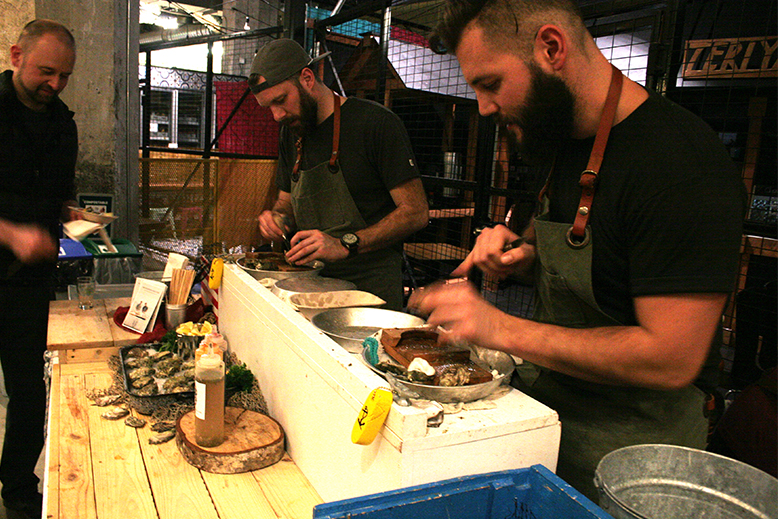 I arrived at this event directly after doing the brewery tour, and so my usual journalistic and impartial demeanour was somewhat blunted. Nevertheless, in the name of professionalism, I resolved to try as many beers as I could, and eat a bunch of sea food, as well.

Fish and beer naturally go together. Beer doesn’t have to be just on the side, either. Lots of batters have beer as foundation, and beer works well in chowders, stews, as a marinade, and all sorts of things.

Some of my favourite drinks in the evening were:

Canoe Brewpub’s Belgian Strong Ale, and Spinnakers’ Hollie Wood Oyster Stout. They are both tasty, but I’m giving them extra points for being local breweries and also having a kind of nautical theme attached to their products. I think Canoe’s count as being nautical. I’m definitely sure oysters count.

Speaking of Oysters, it was fun to run into Jess Taylor from the Wandering Mollusk again. He and his crew were there shucking for the crowd. Oysters provide a good counterbalance to beer. Beer makes you feel like you are sexy (even though it is actually making you less sexy the more you consume). Oysters actually are an aphrodisiac. Maybe the two in combination create some kind of romantic balance.

I also had a fish and chips from Cowichan Bay Seafood. Their batter is very well done and their chips have a proper consistency. As generations of practice have proven, fish and chips goes very well with beer. I wish I could have eaten more, but unfortunately I don’t have nine stomachs, and I’d already had a mac and cheese on the brewery tour. 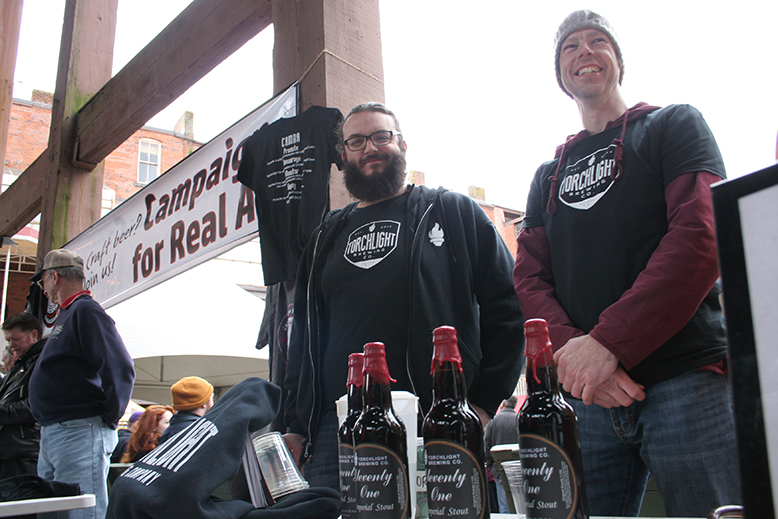 Interestingly, despite being at beer week all week, and trying all sorts of great beers, I still found a few favourites on the last day. Lift Off! takes place at Market Square, and the slightly brisk venue plays host to new offerings from 12 different breweries. I tried to do things sensibly, today, and so I started with lighter beers with a low alchahol content and bitterness index, then work my way up.

Phillips: Sax In The Dark – Phillips continues to offer up all kinds of variety and inventiveness. This sour ale seems to have a zero IBU. It is brewed with grape must. It was strange, but after a couple of sips I kind of loved it.

White Sails Brewing: Brickyard Beach Cream Ale. Again, this is a traditional cream ale in the Irish style. It is infused with nitrogen and therefore has a creamy head, and it takes a minute or two to set before it can be drunk. It has some element of hops, but it is very subtle. It looks pretty and it tastes pretty.

Moody Ales: Honey Red Ale. Normally I’m not a fan of big hoppy ales. This one finds a good balance, though. The classical West Coast hoppiness appears in the front end of the sip, but then after a few seconds the honey and malt appear and wash the hops out. The effect of the transformation is very pleasant. Nice work.

Postmark Brewing: Saison Française. This beer advertises itself as a “100% French ingredient beer”. French malt, hops, and yeast. That’s all there is, and that is wonderful. There is such an impulse to ruin saison beers by putting heavy citrus or other fruits into them. Why? This is the best saison I had this beer week, last last beer week, and maybe ever. It just takes four fundamental beer ingredients and skillfully combines them in the French style.

Torchlight Brewing: Eleventy One Imperial Stout. Speaking of simple ingredients, this stout does the same thing as the Saison Française: the beer fundamentals are used to make a delicious thick stout. There is no chocolate, no coffee. Those things can be nice, but they honestly don’t have to be in there. It is actually ok to enjoy a beer that just tastes like beer. Beer has its own flavour and that doesn’t need to be hidden. Just saying. I liked this stout a whole lot, and I liked the back to basics attitude of the brewers.

So, that’s it for beer week for this year. Totally awesome. I need a week or so to detox, because I drank a whole lot of beer. It’s been wonderful, though. If you missed it last year, I suggest you go next year. In the meantime, remember that we live in a town with all sorts of interesting and creative brewing going on. Get out there and start exploring.

Superflux Cabana has opened upstairs at 804 Broughton St (the former location of The Livet). Featuring lots of Superflux beer and a menu that ...
Read More
January|February issue is on the stands! Pick up a copy, or read the digital version. Read ...
Read More
Thank you Morgon. This is a perfect example of moving on, moving up. Leave your preconceptions of Beaujolais behind, and get yourself to a liquor ...
Read More