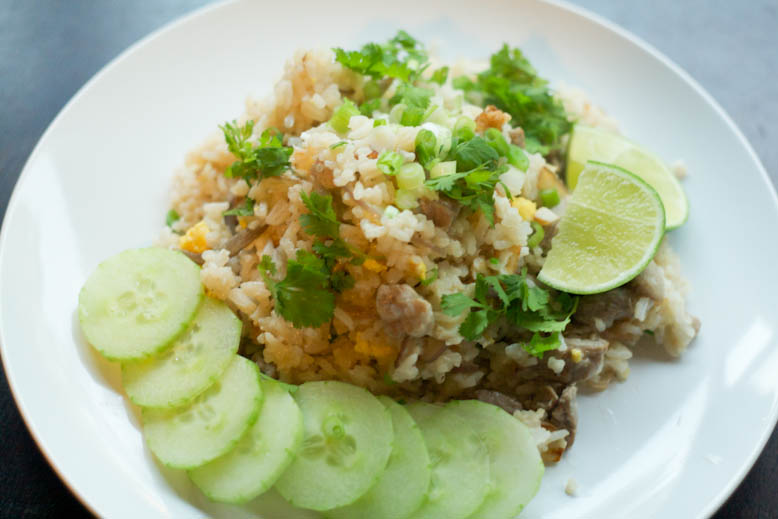 I’m embarking on a new challenge, cooking my way through Andy Ricker’s (here his twitter) capstone Thai cookbook, Pok Pok. Named after his first restaurant in Portland, Pok Pok doesn’t take Thai cuisine lightly. Ricker disses North America’s pad Thai and red curry obsession. The book begins with a warning about following the recipes exactly, followed by a chapter on tracking down hard-to-find ingredients (Ricker suggests scouring Asian markets and the internet for items such as hot basil, Thai thin soy sauce and galangal), not to outdone by a chapter on making rice.

Recipes, even for dishes like salad or soup, can contain dozens of ingredients, a multitude of instructional steps, and a list of special equipment required. I found myself drooling over recipes, only to discover they required tamarind pulp or salted radish. If I can’t find hot basil (bai kaphrao a type of Thai basil), what’s even the point of making the dish? Ricker’s writing is friendly and helpful, but his tone suggests he’d frown on home cooks making substitutions to his carefully laid out recipes. After all, this is a man who recreates the taste and acidity of Thai lime juice by using key limes spiked with a splash of lemon juice. Andy, if you read this article, I apologize in advance for my loose interpretation of your food. I can only improve from here.

For these obsessions with authentic representations of Thai food, Ricker has become somewhat of a celebrity; seven restaurants split between Portland and New York; the 2011 James Beard winner for Best Chef Northwest; and an upcoming documentary with VICE (see below). Pok Pok, released in October 2013, is truthfully not a cookbook, but a Thai food bible. It forces you to pay attention, read the recipe line by line, and appreciate the importance of each ingredient.

For my first Pok Pok experience, I attempted Khao Phat Muu, or Thai Style Fried Rice with Pork. Ricker calls it, “a quick, spirited meal” that “tastes like much more than the sum of its parts.” I choose Khao Phat Muu for two reasons. First, the cooking time (including prep) was under an hour. Second, the ingredients were easy to obtain. At least, I thought they’d be. 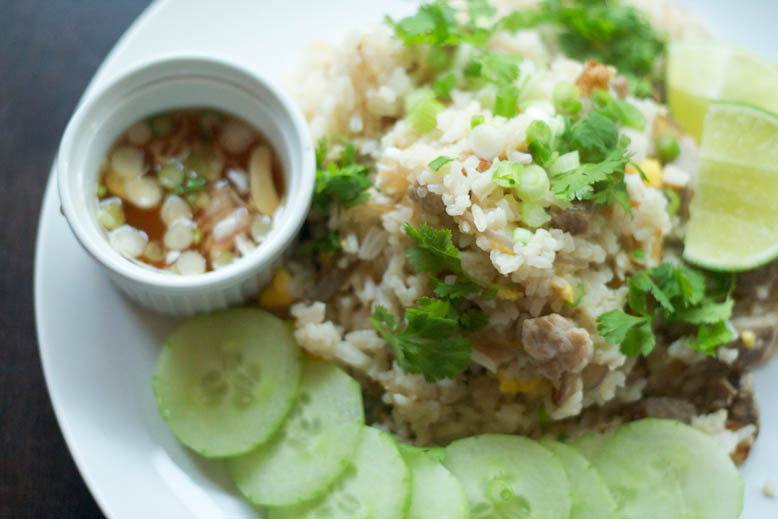 The recipe below is verbatim. I’ve included my tweaks here:

Ricker suggests day-old rice. I cooked mine the same day and let it sit out on the counter.

Shallots and white pepper were out of stock at my neighbourhood grocery store. Black pepper and thinly sliced red onion were used instead.

I chopped up scallion, garlic and red onion instead of the chili for the dipping sauce because I can’t handle spicy food.

I also added rice wine vinegar to the dipping sauce to cut down the saltiness of the fish sauce.

8 or so ¼-inch-thick slices firm cucumber, peeled if thick-skinned

Combine the fish sauce, soy sauce, sugar, and pepper in a small bowl and stir well.

Heat a wok over very high heat, add the oil, and swirl it in the wok to coat the sides. When it begins to smoke, crack the egg (it should spit and sizzle violently and the whites should bubble and puff) and cook without messing with it until the centre of the whites have set, about 15 seconds. Flip the egg (it’s fine if the yolk breaks) and push it to one side of the wok (up the side wall of the wok is fine). Add the shallots and garlic and cook, stirring them (but not the egg) often, until they’re lightly browned, about 1 minute.

Add the pork, stir everything together well, and stir-fry (constantly stirring, scooping, and flipping the ingredients) until the pork is no longer pink on the outside, about 30 seconds.

Add the rice and stir-fry, breaking up the egg a bit, for 30 seconds. Add the fish sauce mixture (add a splash of water, if necessary, to make sure nothing’s left behind in the bowl) and continue to stir-fry until the pork is just cooked through and the flavours have permeated the rice, a minute or so more.

Turn off the heat, stir in the 2 tablespoons of green onions, and transfer the rice to a plate. Top with the cilantro and remaining green onions, and serve with the cucumber slices on the edge of the plate, the lime wedge for squeezing, and the fish sauce-soaked chilies in a small bowl to spoon on top.

Once all the ingredients are prepped, the start to finish cooking time in the wok is less than five minutes. Ricker calls this a one-plate meal, but I think it’s closer to two portions. I had reservations serving cold cucumber slices with hot rice, but scooping a little rice with a cucumber coin dunked in the vinegar and fish sauce tasted better than any Thai takeout I’ve enjoyed.

Pok Pok can seem intimidating, but Ricker has lit a fire under me. You’ll now find me searching the stalls of Chinatown for hot basil.

The article on L’Apéro in the May|June issue should have stated Chef Andrea Maiolo staged at The Courtney Room and Zambri’s and that he held the ...
Read More
May|June issue on the stands. Read ...
Read More
Tickets to the wildly popular Vancouver Playhouse International Wine Festival go on sale January 10th, 2012. Marking its 34th year with the Theme ...
Read More