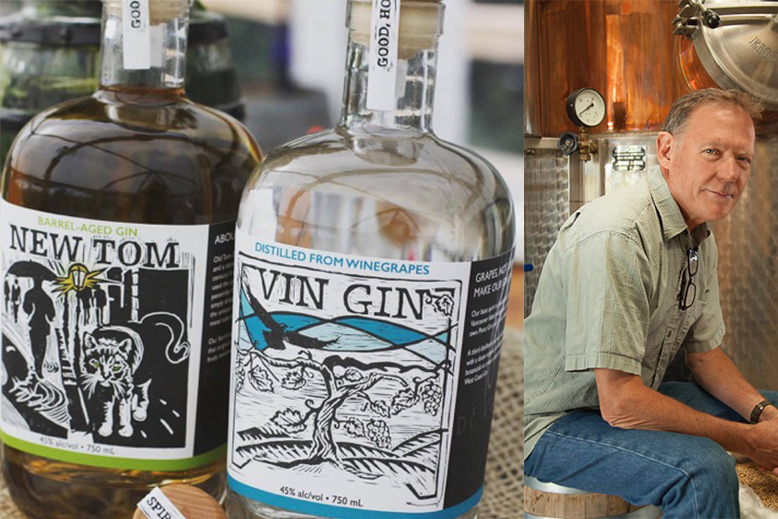 The exciting growth in local craft spirits continues with the launch of two gins from Saanich-based de Vine Vineyards and Spirits.

Like all gins, the offerings from de Vine are based on a neutral spirit that is flavoured with botanicals. It’s the combination of botanicals that sets one gin apart from another and Ken Winchester, winemaker & distiller at de Vine, has created a uniquely BC spirit by using local juniper, spruce tips and lavender from the de Vine estate, and BC orange and lemon peel. Another big differentiator is Winchester’s decision to use surplus wine grapes as the base for the spirit, rather than typical grains – something that gives a very smooth spirit.

The two gins are called Vin Gin and New Tom and the difference between them lies in the aging. Vin Gin is unaged while New Tom spends 8 weeks in used Bourbon barrels – just enough to mellow the gin and add notes of cloves, nutmeg, Christmas spice and smokiness. Winchester explains that New Tom is a play on “Old Tom”, which was popular in 18th-century England and is sometimes referred to as the “missing link” because it is slightly sweeter than London Dry, but slightly drier than Dutch Jenever. Both gins are currently available only at the winery, but should be making an appearance at select restaurants and private liquor stores soon.

For Winchester, the expansion into spirits is a story that has unfolded over a long time. After studying winemaking at UC Davis in California, Winchester’s fascination with spirits took him to Michigan State for training and then onto an apprenticeship at Bruichladdich Distillery in Scotland. Returning to Canada, Winchester was at the forefront of BC’s craft distillery industry when he was Victoria Spirits, but he had to wait for the 2013 changes to the craft distilleries legislation for things to really open up. The changes presented a huge opportunity, but Winchester was challenged to find the right equipment – the explosion of the cocktail scene in Seattle had resulted in long waiting lists for stills. So when Winchester heard of a pot still that was being sold as part of an estate sale, he jumped in and bought it sight unseen. The still, now christened Brunhilde (or “warrior maiden”), is 30 years old and has seen service in Germany, Nova Scotia and Okanagan before making its way to the Saanich Peninsula. Brunhilde was held in storage until de Vine received a craft distillery licence and Winchester could dust her off and once again pursue his passion for spirits.

Winchester has plans for an extensive range of spirits at de Vine. Already in the works are a rum-style spirit based on honey rather than sugar cane, and an apple-based brandy, similar to Calvados. Both should be ready to release at Christmas. Winchester is also working on a sloe gin, using an expected gift of blackthorns from a neighbour. Longer term, Winchester is planning a whisky using locally malted barley.

Winchester is excited about the growth of local craft spirits and believes that BC can become the Portland of Canada; offering a vibrant cocktail and spirit scene with lots of choice for consumers.

Looks like exciting and busy times for Winchester and the team at de Vine as they balance the demands of the winery and the distillery.

The article on L’Apéro in the May|June issue should have stated Chef Andrea Maiolo staged at The Courtney Room and Zambri’s and that he held the ...
Read More
May|June issue on the stands. Read ...
Read More
EASY ELEGANCE FROM FABULOUS FAIRHOLME By Sylvia Main, Whitecap (Hardcover) $29.95   The follow-up book to the very popular ...
Read More