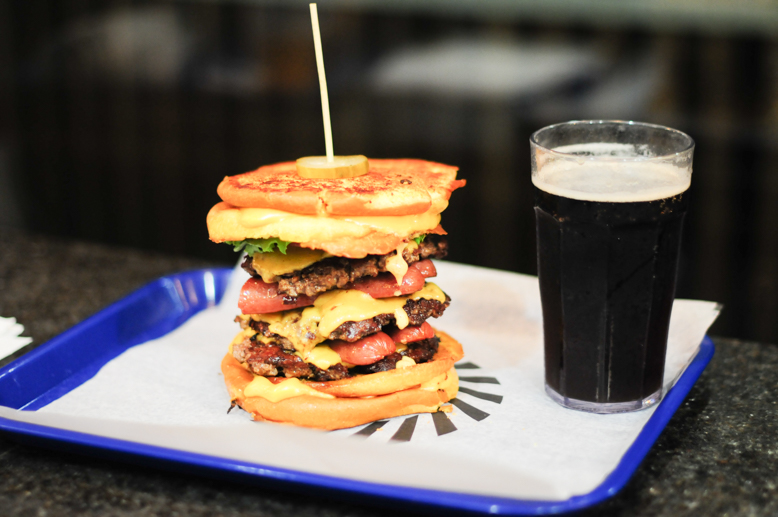 A note from Assistant Editor, Colin Hynes: I found these notes in my email this morning after he didn’t show up for our aerobics class. Last night I sent him to investigate the elusive “18 wheeler” at Big Wheel Burger. No one has heard from him since. I have yet to corroborate any of the information provided here, but I fear that what is written here is true.

I’ve eaten a lot of burgers in my time. I’ve also ridden my fair share of bikes in my time and, if you’ve ever gone for a long enough bike ride, you’ll know that it makes you hungry — really, really hungry. As such, my love of burgers and cycling results in a kind of feedback loop: I love burgers and eat too many of them so feel I have to ride bicycles; I ride bicycles and get hungry and so eat burgers; I feel guilt for eating said burgers and ride bicycles; I ride bicycles and get hungry and… Well, you get the idea. I’ve tried my best to quit to jump off the burger wagon (or to get back on the wagon? I forget how that analogy works), with little if any success. This week, I may have found the solution.

Since it opened in 2011, I’ve been a big fan of Big Wheel Burger. They make what might be Victoria’s finest no-nonsense burger, and I like that they stray away from the gourmet thing while still using top drawer ingredients. I’ve eaten cartons upon cartons of their poutine, I’ve downed Big Wheel burgers of every variety, and occasionally I’ll do the hot dog thang (usually, it should be noted, while desperately hungry, sweaty, and bespandexed). There is, however, one culinary path I’ve never dared to embark upon at The Wheel: the 18-wheeler.

Consisting of three burger patties, two hotdogs, cheese, Big Wheel sauce, onions, tomato, pickle, the 18-Wheeler is a sight to behold. Oh, and instead of a bun, the burger (if you can call it that) is wedged between two grilled cheese sandwiches. The 18-Wheeler, then, is a bit of a food challenge, not unlike the animal burger from A&W, or (as I once attempted in my youth) the “eat the entire A&W burger family” undertaking.
Given that my time is numbered here in Victoria (I’ll be moving at the end of the month), and that, well, I work for EAT Magazine, I figured documenting this plunge into culinary depravity and shame was worth documenting for you, dear readers. Yes, I, Jonathan Johnson, an almost healthy twenty something-year-old reader, am willing to take probably an hour off of my life to bring this burger massacre to you.  Plus, if all goes to plan, this overdose of burger just might be the shock to my system needed to end my burger addiction for good. Time will tell…

In an effort to minimize the effect of eating 700% of my daily sodium intake in one sitting, I went on a bit of a fast today. I had some oatmeal and peaches around nine in the morning. I’m now going to go for a bikeride in order to create a caloric deficit for the day. 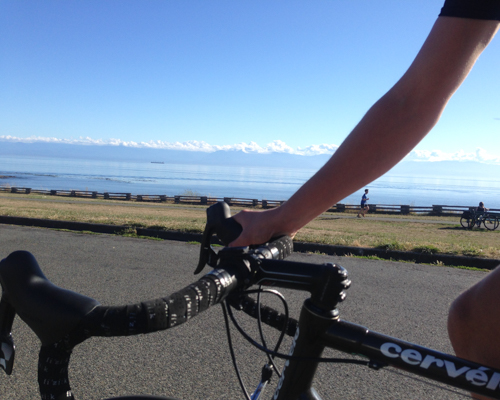 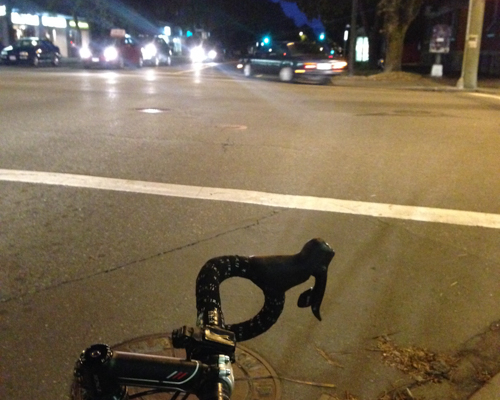 
Bike ride complete! With a friend of mine, we went on a longish ride of around 70km — not huge, by some people’s standards, but enough to burn roughly 1700 calories. Estimating that my total caloric intake before the ride added up to roughly 600-800 calories (oatmeal, peaches, gallons of coffee) I figure that gives me about 3000 calories of room for the 18-Wheeler (I realize that doesn’t account for calories from fat, but let’s not get too bogged down by nutritional science here because, well, I don’t really know much about it). The ride was a good one — a beautiful September evening if there ever was one — and it went pretty late into the evening (about 8:30pm). Upon returning home, I grabbed my camera, rallied my roommate to join me, and headed to Big Wheel. 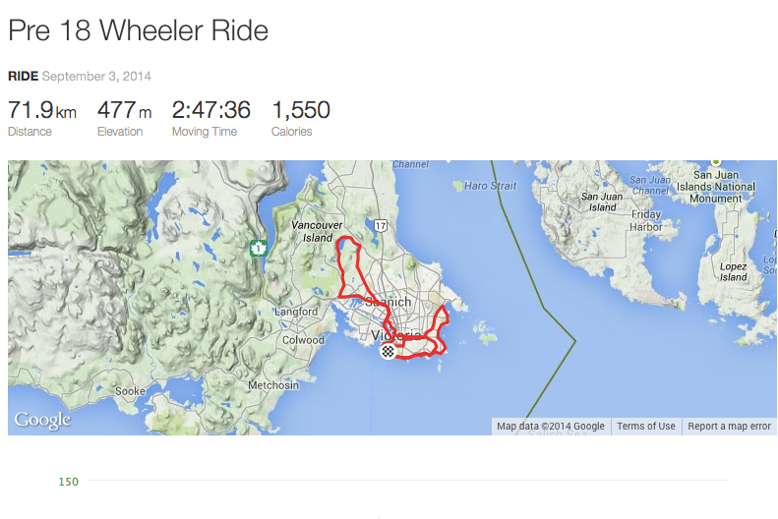 The Strava map from my ride — evidence that I did indeed ride my bike before my date with burger destiny.

I just ordered the 18-Wheeler and a pint of Dark Matter — a combination, the burger merchant and my roommate inform me, that doesn’t make much sense (“Why are you trying to wash down this giant burger with a dark and kind of heavy beer?”) Truth be told, I haven’t had a Dark Matter in a few months, so I couldn’t resist (I have been living off Rainer Beer in Seattle, you can read about it here). One thing to note, the 18-Wheeler is a pretty good deal; at $16, it might be one of the best bargains in Victoria. 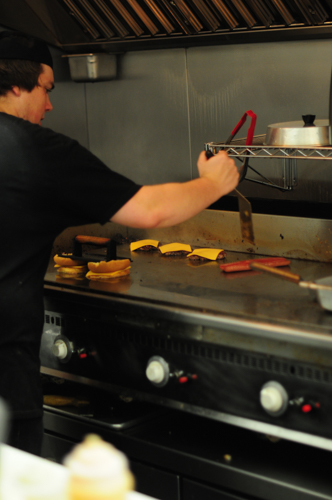 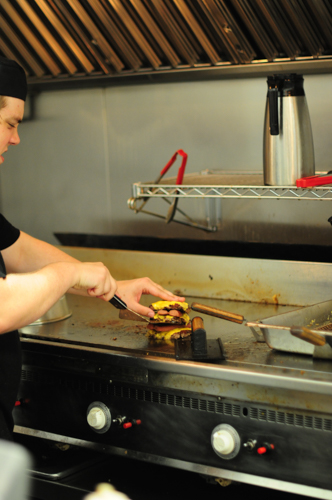 Local burger baron Jackson is behind the grill, and has set to work. Hands in my head, I watch — in the last remaining moments of my dignity — as Jackson prepares the burger. Hotdogs are cooked, grilled cheese sandwiches are created, burgers are flipped, and the whole thing is precariously piled high, a wooden stick driven through for stability. I now eat.

Something this huge is, of course, difficult to eat, and a bite encompassing each individual segment is simply not possible. The 18-Wheeler is easy enough to hold, which is nice. It takes me about two to three bites to traverse the burger from top to bottom.

The first thing I’m noticing is just how damn good the grilled cheese sandwiches are. Crispy with just a hint of damp butteryness, they actually compliment the burger patties and big wheel sauce quite nicely. This burger, for being such a monstrosity, is actually really well thought out; the crunch of the pickles is pretty refreshing, the grilled cheese are the opposite of dry, and the hotdogs really compliment the burger patties with a salty bit of zest. If you haven’t had the Big Wheel hotdog, you should; it’s a pretty authentic “New York” dog kind of thing, and it’s definitely a very rich, very salty offering. Coupled with the burger patties and the grilled cheeses, it’s making for some super rich eating. If I may say, “this is a tasty burger!”. 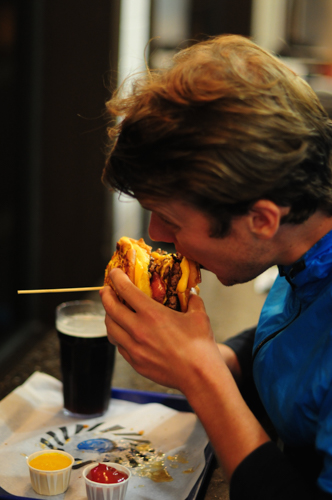 I’m about halfway through, and the first half went pretty quickly. As I eat, I’ve noticed that the lights are flickering, and that there’s a howling, of some kind that I can’t place nor make sense of. As I eat it grows louder, and the lights flicker more and more. Strange. My progress is slowing, my stomach is filling — quickly. I’m reminded of Dante’s Inferno, in burger form: “Midway upon the journey of my 18-Wheeler life, I found myself within a dark burger forest.” 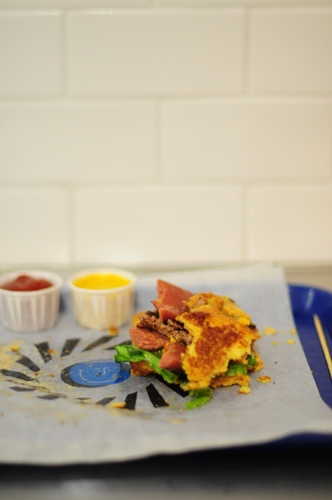 Things are not what they seem. As I continued through the second half, I felt my prior self leave me. Big Wheel Burger, the restaurant I once knew, now appears different to me. The burger patties, while so well made and so delicious, are just so thick that each bite is a void, a lifetime in itself of culinary darkness. Coupled with the hot dogs nested between each continent of beef, a dark swirling void of past regrets and specters of sorrow fill me; laughing burger demons flit before my eyes, ghastly hot dog spirits loom and swim in my periphery, visions of cheese and Big Wheel sauce flowing from elevator doors consume my broken psyche. I’m now attempting to douse these terrors with mustard. I will write soon.

The mustard proved ineffective. I fear all is lost. My progress is gradually slowing, and the voice of my supportive companion, Hadley, seems but a distant echo of a life I once knew free from the beef-addled void I now inhabit. Hooded, hissing figures appear outside the window with burgers in hand, tempting me to a world previously unknown to me. With each bite these hooded figures seem to multiply, and with each bite they grew closer, and with each bite I know that the body I once inhabited will never be the same. Soon I will be one of them, the hooded ones. I sip my beer — the aptly named Dark Matter — and despite this delicious, delicious beer, my world grows darker, colder. A quarter of the sandwich reduces itself to a fifth, an eighth… Now only one bite lies before me. I know this bite will seal my fate, yet I fear there is no other way. I eat it. My transformation is complete. 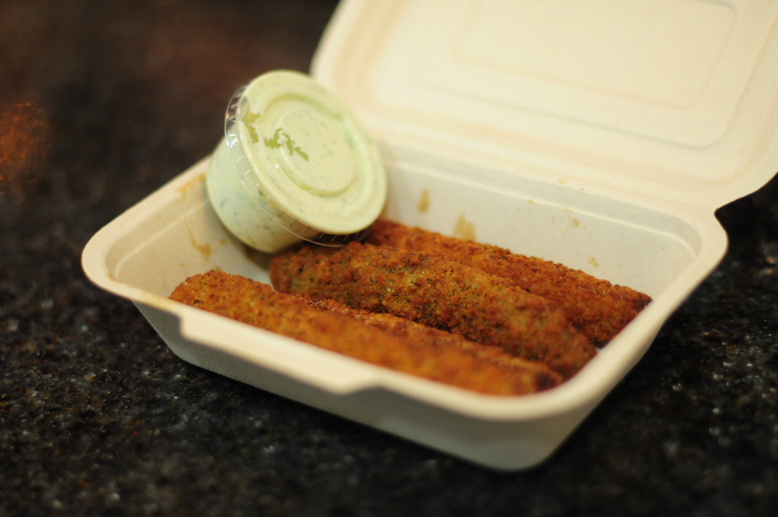 Pitying my post 18-Wheeler existence, Jackson provided me with Deep Fried Pickles. All is truly lost.

Perhaps aware of my post-18-Wheeler existence, Jackson has rewarded my efforts with a free order of what I once knew to be Deep Fried Pickles. Somehow I was able to consume one, while my companion finished the rest.

I walk among the 18-Wheelers, now — the life I once knew is no more, and now resides in the cold dark burrow of consequence that is history.

I can say, confidently, that the 18-Wheeler is actually pretty delicious. While the phantoms that now haunt me implore me to tell you that you and everyone you know should go to Big Wheel Burger right now for the 18-Wheeler, enough of my former rational sense remains to recommend to you that you should probably just split it with a friend.  If you do choose to eat it by yourself — well — we’ll be seeing you soon.

All Hail The 18-Wheeler.

*Dons hood, walks into the darkness*

UPDATE (from one of Jon’s friends): I went to Johnson’s house. Turns out he didn’t show up because he had a “meat hangover.” I found him completely holed up with all the curtains drawn and drinking copious amounts of water. Apparently he went out for another bike ride after he had eaten the burger. In short, he’s fine.

Superflux Cabana has opened upstairs at 804 Broughton St (the former location of The Livet). Featuring lots of Superflux beer and a menu that ...
Read More
January|February issue is on the stands! Pick up a copy, or read the digital version. Read ...
Read More
Springtime in Vancouver, love is in the air with a touch of Paris. A French invasion of pastry is taking over Vancouver with Laduree’s new location ...
Read More