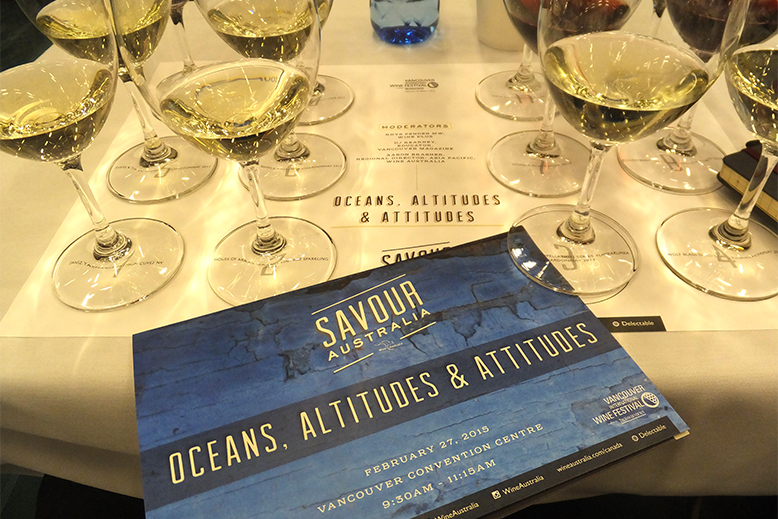 Australia put on a party at the Vancouver International Wine Festival and BC came to taste. Relaxed, laidback winemakers from over 55 Australian wineries and an outback-themed tasting room were the perfect invitation to revisit what Australia offers.

Australia seduced the world with great value, unabashedly big, fruity wines in the 1990s. Then the wine world moved on—leaving Australia struggling to shake off the critter labels and fruit-bomb image. Despite a message of change and increased regionality from Wine Australia, many have stubbornly held onto opinions formed 10 or even 20 years ago. Definitely time to re-taste and re-consider.

Australia is huge. At the Geological Gems seminar, moderator Mark Davidson, Education Director at Wine Australia, drove home that point by overlaying a map of Europe on Australia. UK to Greece, Portugal to Romania—it was an easy fit with space left over. Europe is home to all the benchmarks and thousands of other wines. We know that. So why do we associate Australia with one, or maybe a couple, of wine styles? With a range of climates and some of the oldest and most complex soils in the world, Australia has the foundation for marked regional variation. Holding onto the idea of one wine style just doesn’t make sense.

There was ample evidence of diversity and change in the tasting room and the seminars. Chardonnay is my barometer of style. It’s a variety that loudly translates harvesting and winemaking decisions into the glass, making trends obvious. At the Oceans, Altitudes, and Attitudes seminar, I was excited to see four chardonnays in the line-up and they didn’t disappoint. There was a freshness and elegance in all the wines, with on-point winemaking. Oak was there, but it was subtle and well-judged with the fruit shining through. I am resolutely hunting down cooler climate examples from Tasmania, Tumbarumba (especially Tumbarumba – how can you resist that name?) and Adelaide Hills.

That restraint was echoed in the reds; the syrahs were leaner and more peppery, and the pinot noirs were lighter and fresher. Yes, there were a few of the old fruit-bombs in the room, but instead of dominating the selection, they were just a point in the spectrum—part of the diversity on offer and adding to the options available to the consumer.

However, it wasn’t all change. Hunter Valley semillon is a classic wine, much loved by oenophiles. It has an amazing ability to transform with age, when it becomes incredibly textured and honeyed. It was a relief to taste benchmarks from McWilliam’s Mount Pleasant and Tyrell’s, and find them unchanged. Similarly, Australian rieslings were true to the archetype of dry, crisp, citrus-loaded wines with glinting minerality. Australia has adapted and moved forward, but has resisted the temptation to tinker with wines that have a true sense of place and can’t be found anywhere else in the world.

VIWF is an annual odyssey for dedicated wine geeks and the merely curious. It’s one of the largest consumer wine festivals in North America with over 25,000 people attending the 50+ events that take place over 8 days. The 2016 festival is scheduled for February 20 – 28, with Italy as the theme region. Don’t expect outback barbeques next year, but classics and many unusual, indigenous varieties.

November | December issue on the stands. Read ...
Read More
For the ninth year in a row Rancho Vignola is setting up its Vancouver Island Harvest Sale here at the Mary Winspear Center in Sidney. Many of ...
Read More
Season’s Greetings EAT readers! We at EAT are looking forward to all the wonderful seasonal baking on offer around the city. One of the great joys ...
Read More
Masterclass Candied Citrus Holiday ...
Read More
photo: Katherine Hutchins Three years ago, while discovering my new neighbourhood on bicycle, I stumbled upon a lush, green patio space nestled ...
Read More