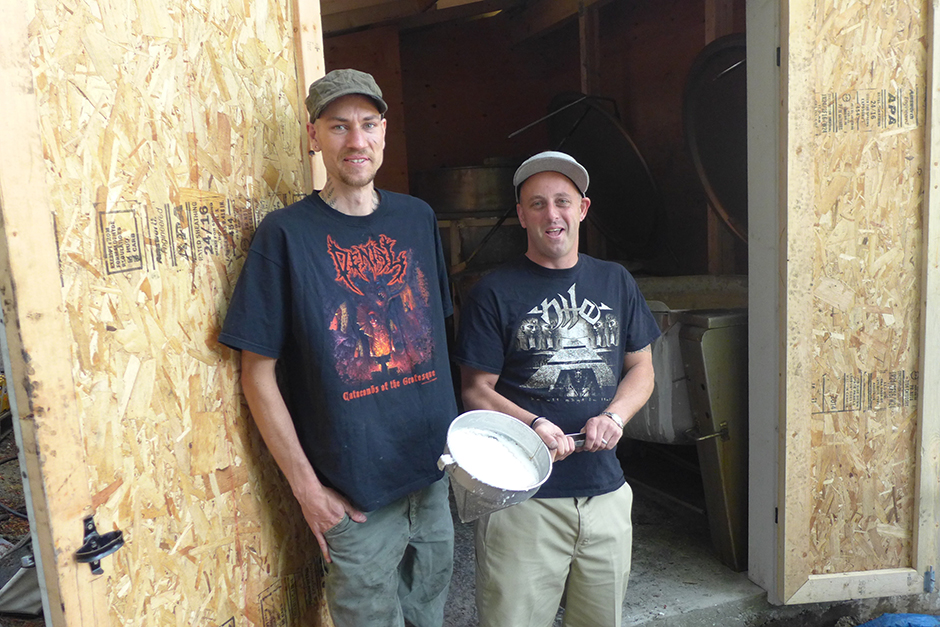 On September 18, Andrew Shepherd finds out if he has won $100,000. As one of only four finalists in the TELUS/Globe and Mail contest “The Challenge” his Cobble Hill-based company, Vancouver Island Salt Co., is in the running to win the prestigious award. Shepherd’s company was selected out of a field of over a thousand cross-Canada entries in the search for the nation’s top, innovative small business. Vancouver Island Salt is one of Canada’s first commercial harvesters and producers of artisanal sea salt. The winner will gain a serious financial boost to help grow his business.

Says Suzanne Trusdale, vice-president of TELUS Small Business Solutions, “The four finalists exemplify the ways in which Canadian businesses are innovating today. Whether it’s by investing in technology, increasing their manufacturing capabilities or driving demand through marketing, we can’t wait to see how $100,000 will help the winner expand their organization to compete on a global scale.”

To win, Vancouver Island Salt Co. must receive the most number of votes from supporters in a national online vote. The other three finalists are Stathletes Inc., a company that  provides in-depth statistics on hockey players’ performance (St. Catharines, Ont.), 4Deep Inwater Imaging which produces submersible imaging equipment (Halifax, NS), and Imbibitive Technologies Canada Inc., an environmental tech company and maker of tiny plastic spheres that can absorb chemicals, such as during an oil spill (Welland, Ontario).  Regional loyalties are running high and Shepherd hopes that BC voters will help him achieve his prize.

“As a business,” says Shepherd, “it’s nice to be stacked up against businesses in general and not just food industry businesses. We’ve been very fortunate and successful in the food industry in terms of recognition. We’ve won Black Tie awards, Top 40 Foodie and we’ve won a top twenty National Food Artisan award. It’s good that we are recognized within our own industry, but for the first time on a really big scale, we are being stacked up against just businesses. We’re pretty happy that we are being recognized as an up-and-coming Canadian business and not just a niche company.”

Shepherd’s supporters are loyal and include chefs who use his salt in their restaurants and consumers who are buying, not only the natural sea salt, but also the innovative seasonal infusions salts such as Spanish Paprika, Balsamic Vinegar and Danish Blue Cheese (I’m a personal fan the Danish Blue. I sprinkle it on steak for a flavor lift). The salt is clean tasting with a soft crystalline texture. Unlike table salt, it’s unrefined and is not harsh or chemically tasting. Minerals such as calcium, magnesium, and potassium are retained and help define its unique flavour. Foodies who appreciate the difference prize sea salt from the cold, clean waters of British Columbia. 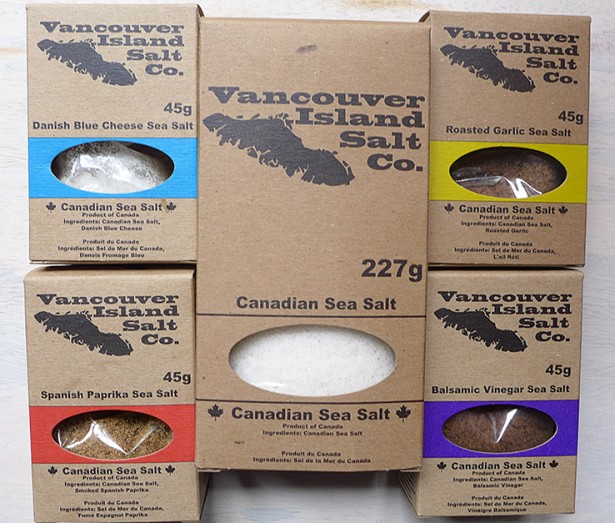 Pictured at top: On the left is Bryan Krueger; to his right is Andrew Shepherd.
This photo: A selection of salts from the Vancouver Island Salt Co.

I first met Shepherd five years ago when I visited his Cowichan Valley home, near Cherry Point. He showed me how he hand-harvested the salt by filling buckets of ocean water and bringing them back to the house in the trunk of his car. He boiled the water down over a wood fire in large cauldrons. Talk about artisanal devotion. These days the business is more sophisticated. The ocean water is pumped into large drums mounted on a truck and then gravity fed into large vats in the newly built salt house. The evaporation process is fueled in a sustainable manner by using recycled vegetable oil as a fuel source to evaporate the seawater (it’s been certified as beyond carbon neutral). Vancouver Island Salt Co. is a member of the Cowichan Bio-Diesel Coop. Shepherd has also taken on employees to help with the work. Bryan Krueger is onboard as the new Harvestry Manager and is in charge of the salt harvesting and evaporation and now part-time workers come in fill the bags and assemble the boxes for distribution, which Andrew used to do at his kitchen table.

If Shepard wins the $100,000, the money will be used to expand his business globally and put BC and Vancouver Island on the map as the number one sea salt-harvesting business in North America. Currently, Vancouver Island Salt is in retail stores in Vancouver, Alberta, Toronto, and Nova Scotia, and the goal is to bring Island sea salt to the international market. (Already there have been enquiries from South Carolina.) A new fulltime employee would be hired and the added working capital would allow Vancouver Island Salt Co. to scale up production.

Maryanne Carmack, GM of the Victoria Public Market says, “I think it is SUPER exciting that Andrew Shepherd of Vancouver Island Salt Co. was selected as one of the four! Andrew is also a tenant here at the Victoria Public Market, and we are very supportive of his latest endeavor. It would be FANTASTIC to get the support of Vancouver Island voting for one of their own.”