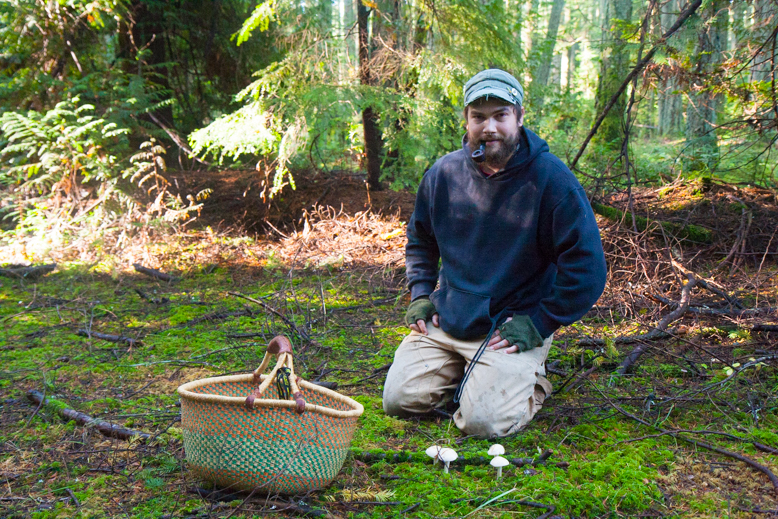 “Ahh, these are the droids you’re looking for.” Erik cuts off the trail to the right and rounds a tree, crouching down before two fist-sized red objects.

It’d been a half hour of bushwacking through the grounds of the Hatley Park National Historic Site, looking for wild mushrooms. We’d nibbled a spicy Russula emética (AKA the vomiting Russula, not to be eaten uncooked), spied and gathered several shrimp mushrooms (Russula xerampelina), and steered clear of what looked like a deadly toxic Galerina marginata. Now we’d found a modest treasure; not chanterelles or king boletes exactly, but lobster mushrooms, bright red and vibrant among the salal and moss. Erik cut gently below them with his knife, flipping the body over to show me the smooth, unbroken head. 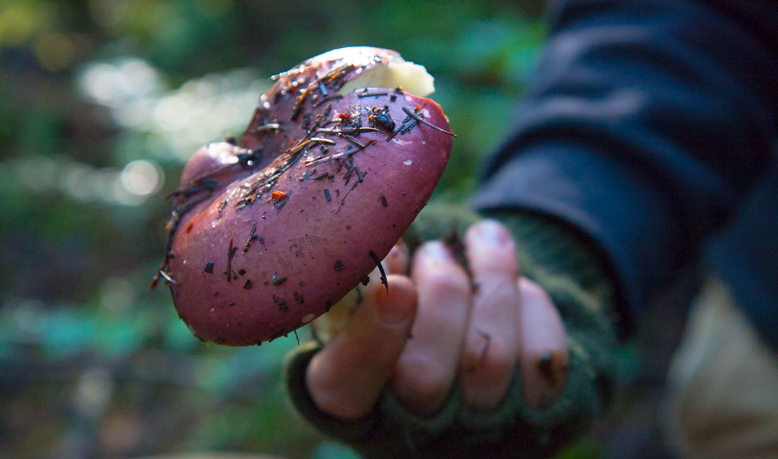 The three main months of fall are prime mushroom-picking season for Vancouver Island. In finer grocery stores I’ve started to see trays of golden chanterelles and bright red lobsters appear, tempting shoppers with their enigmatic flavours and origins. I was standing before one of these trays recently and realized how little I actually knew about mushrooms, which, given my family history, is frankly a little embarrassing.

Warning: Mushroom picking should not be done without the aid of an experienced forager. In no way is this primer meant to be used as a replacement for a proper experienced guide.

My grandmother Helene (Leni) Schalkwyk-Barendsen was a lifelong mycophile and a founding member of the Alberta Mycological Association. She held a Masters degree in horticulture from the University of Wageningen in the Netherlands and, in 1991, published a book entitled Mushrooms of Northwest North America, which she illustrated herself with detailed watercolour and acrylic paintings. You can still buy copies in bookstores today, though the original cover (Mushrooms of Western Canada) is much prettier if you ask me. 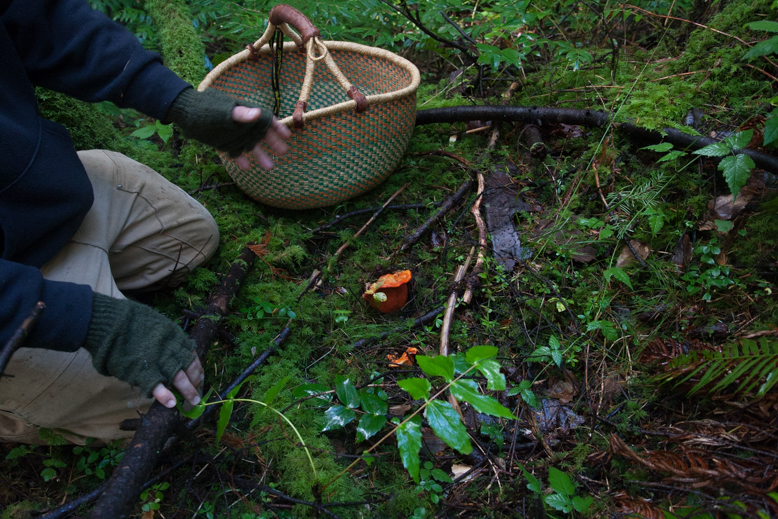 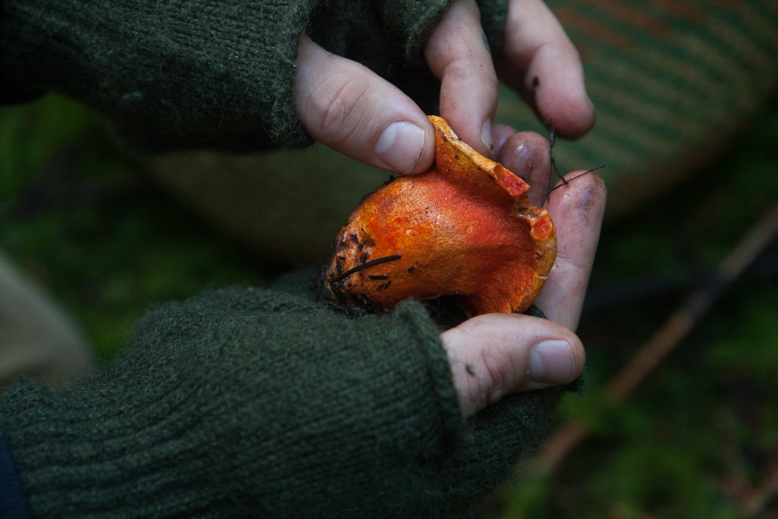 Leni passed away a few years ago at the age of eighty-eight, and since then I have regretted not building a deeper relationship with her when I would visit my grandparents as a kid. A few weeks after the grocery store incident, I asked my friend Erik Arthur Blair if he would take me on a short foraging expedition in the interest of honouring my grandmother’s memory.

Erik, like most mushroom gatherers, is largely self-taught, having studied the vast amount of collected research and writing on mushrooms. He collects local wild varieties mostly to cook and eat, though he also does a fair bit of teaching, and he and his wife produce a line of hand-made mushroom soaps. On a bright Saturday morning we drove out to Royal Roads and spent a few hours tromping around collecting mushrooms while Erik gave me a crash course in the hunter-gatherer lifestyle. 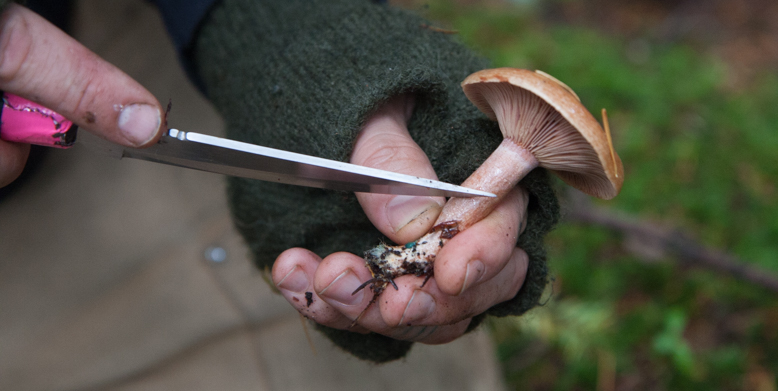 It’s hard to imagine a better mushroom hunting character than Erik. You might be picturing a wizened elder with scraggly gray hair, but Erik is the picture of health, leading a gentle charge into the underbrush clad in wooly fingerless gloves, work pants, a plain black hoodie and puffing on a pipe full of his own hand-cured tobacco. Here are a few of the edible mushrooms we found with some notes from the man himself.

Erik held this mushroom up to my ear, explaining the release of spores when the mushroom is picked. “They hiss, and see the smoke coming off of them? That’s the spores. They’re related to morels actually, and they have this fluted stem with all these little holes. Always a dark grey colour. Not a ton of people eat them but they’re really good.”

“Typically it’s a little bit bigger, a little bit meatier than a regular Russula [italics], and it always has this kind of burgundy wine coloured cap. Often there’ll be a tinge of pink on the stem, just a tinge otherwise it might be on of the more spicy ones. A lot of times they’ll have the scent of shrimp or seafood, and they’ll cook up with that smell as well so finding one fresh is kind of a treat because they are susceptible to bugs.”

“They’re an edible, they kinda taste like minerals, so I like to candy them. Sometimes like iron. Or I do ‘em up in a honey garlic sauce. They just kind of absorb flavours because they don’t really have much to them.”

“It’s actually a parasitic fungus that infects other species, typically a Russula, and then by the end of its life it’ll have the DNA of both species. It’ll turn the boring Russula into something delicious. They like big hemlock trees, kinda disturbed mulchy soil.”

“That’s the indicator of the species is the color of the milk. You just nick the stem. One of my favorite edibles actually.” Known as rovellons in Spain, these are considered a “choice” mushroom, though don’t eat ones you find close to the roadside as they can accumulate toxic elements. 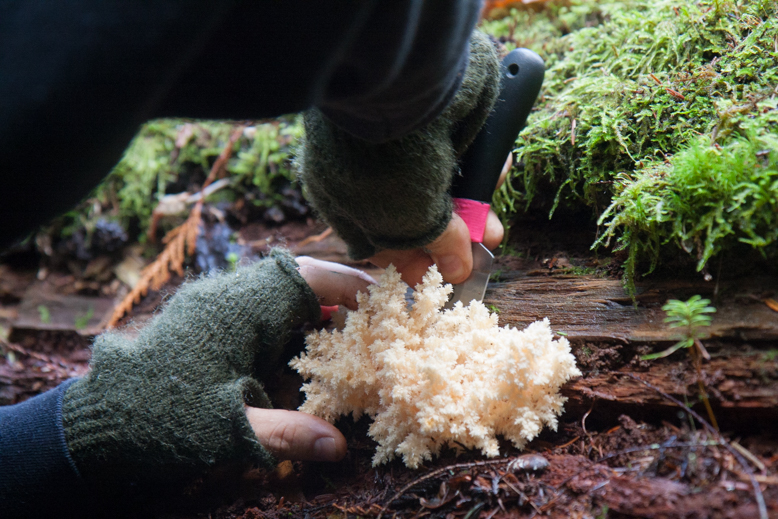 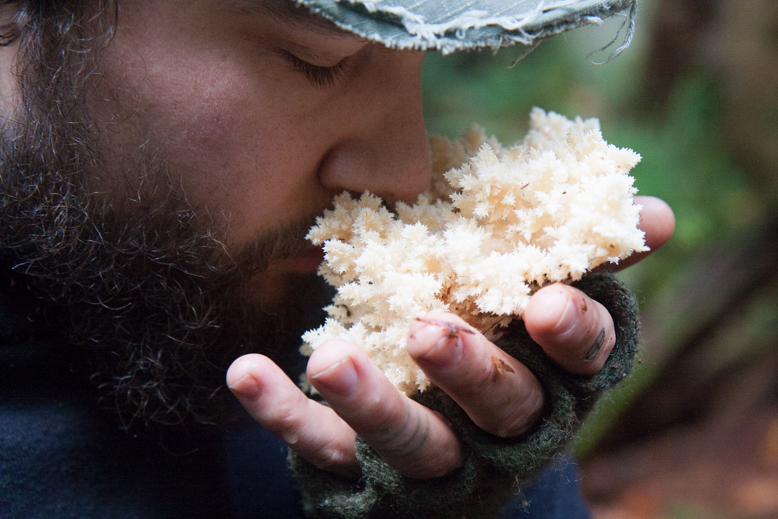 Erik harvested some of this from the side of a dead log; it often fruits at the same spot, so he returns to it regularly. It looks like condensed frost and is among the safest mushrooms to pick as it’s easy to recognize and none of the variants are poisonous.

These are just a few of the many kinds of mushrooms that grow in the forests around Victoria; the famous chanterelles, morels and pine mushrooms are noticeably absent, for example. According to Erik, most of the spots nearby to town have been picked over by this point in the season. But if I learned nothing else from that day, it was the mushroom picking has just as much to do with the trip than it does with the result. 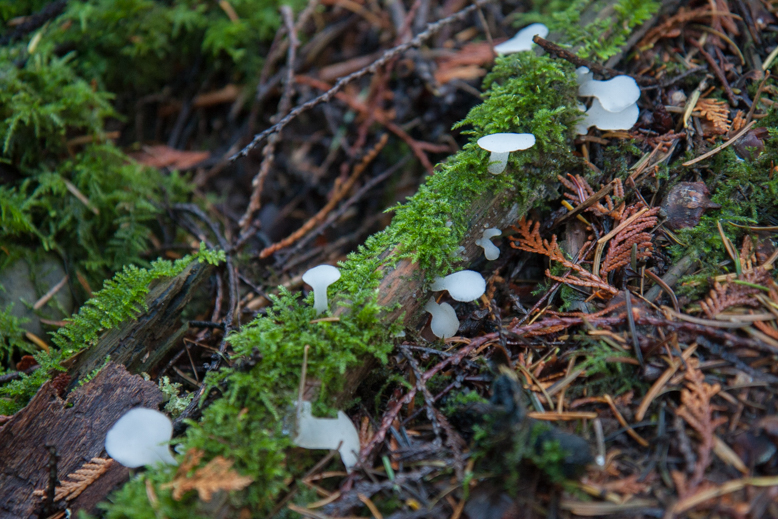 Keep an open mind and a guidebook and you’ll find plenty to eat. And the experience of breathing fresh, invigorating forest air, the excitement of spying something edible-looking in the underbrush, and the dopamine rush of constantly learning new things makes for a heady combination — no psychogenic products required.

Yesterday I got the first chance to dig deep into Spain, this year’s Theme Region. It’s challenging to talk about the wines of Spain as a whole, ...
Read More