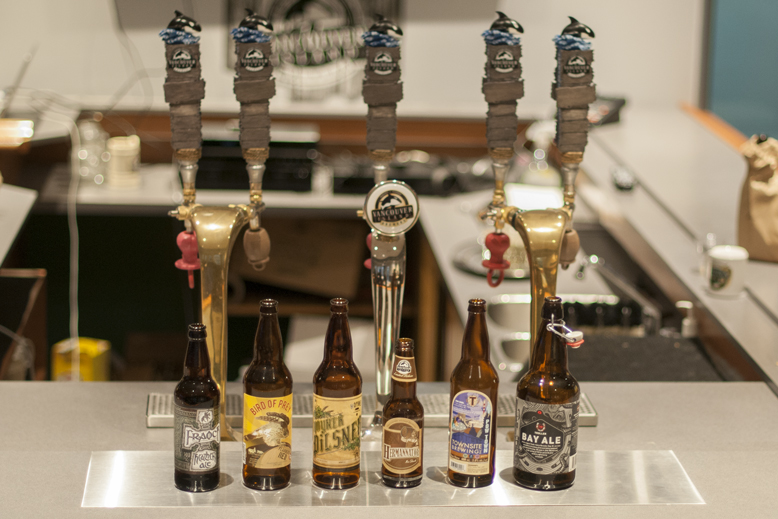 Beer week started off with a fantastic cask night. Since a picture replaces a thousand words, take a look (pictures here).

The next day the festivities continued with a few classes taught by Ken Beattie author of  the Eureka Beer Guide. The first class of the day was an introduction to beer: how it’s made, how the different types should taste, smell, and look.  EAT was able to attend the afternoon class, The History of Beer. For the history class, Ken took his students on a trip through time, using beer as the guide—he had chosen 6 craft beers that best exemplified each beer style.

Ken started by giving us a quick and dirty history of beer. As it’s “the oldest recipe in the world”, it lends itself to having some deep history. Hop farms from years ago that may or may not have been used for beer. From how women were the first to discover how to make beer on to the Sumerians. The Sumerians even had a god they worshiped called Ninkasi (which means women who fills the mouth); she was the goddess of beer. They also had a chant that was a recipe for making beer. Needless to say, they liked their beer.

He went on to tell about the Egyptians and how they had used beer as a form of money; higher quality beers being worth more. Eventually, though, Ken was able to guide everyone to their first sampling. He had decided at the beginning of the class to have us blind taste each one; give us clues, and then the reveal.

The first beer he brought us was light in colour—the colour of straw—with some sediment in it. He told us it came from 3000-2000 B.C. and that it was created by the Picts, who also created Stonehenge. No one in the class could guess it. He revealed that it was Gruit, an original style of beer that uses no hops, so it is very sweet. He had chosen Fraoch Heather Ale to show this style. Fraoch is made from the original recipe and is still brewed in Scotland. It has pineapple aromas with a golden delicious taste.

Barbarians and the Hun

Later on in world history, quite a while actually, the Barbarians came to Briton. With them they brought barrel-aged beers on their boats. At the same time, Trappist monks were also making barrel-aged beer. Those were our only clues for Ken’s next blind beer. It was darker amber in colour, with strong mulled spice smells. Ken unveiled it to be a Red Wheat beer. He chose Driftwood’s Bird of Prey: Red Flanders for us to try. It was also, like the first beer, very malty. Although because this one is a sour beer that is aged, it had qualities that you would find in a cider, like the spiced smells with flavours of coconut and sour cherries.

While we were enjoying the Red Wheat beer, Ken talked about German history, which led us into Lager. He chose Vancouver Island Brewery’s Ice Bock, the Hermannator (ABV. 9.5%), as  good a version of an Ice Bock lager as you’ll find (on a side note, it takes Vancouver Island Brewery 8 months to make their batch of Ice Bock, as there are over 5 extra steps that have to be taken to make it). Next, we were off to England circa 1755 to sample an English Porter, which was developed and created at the Blue Flag Pub. For porter, Ken had picked Townsite Brewing’s Pow Town Porter.

Back across the channel to Czechoslovakia, we learned how pilsner -urquell came to be. How Josef Groll had developed the pilsner, the refrigeration technique for it, and the use of saaz hops. For our blind test, most of us thought he was going to give us a Pilsner-Urquell, which, if we had thought about the fact that we were tasting craft beers, we would have realized was wrong. Ken had picked a craft beer known around the world as the closest you can get to an original pilsner nowadays, Hoyne Pilsner.

– Students are equipped with glasses, water and of course note paper.

One of the most interesting discussions was on Canada’s part in the history of beer, starting with the French missionaries that came from Brittany and Normandy.  They brought beer and cider with them and started a real culture of beer in the areas around their settlements. Eventually, Canada issued its first brewery license to Louis Prud’homme.  Many other breweries followed: Molson, 1786; Alexander Keith, 1820; Sleeman, 1834; and Labatts, 1847.

Then, later many other breweries opened:

Coming full circle, Ken discussed BC’s and Victoria’s beer history. In 1858 Victoria’s first brewery, the Phoenix, opened (yes the Phillips beer is an ode to it). Since Victoria had such a vibrant navy scene, the breweries of Victoria got big quickly. Phoenix was making 150,000 gallons of ales and porters by 1886. Fast forward to the 1980s. John Mitchell opened up the Troller Pub in Horseshoe Bay as the first craft brewery in BC. (Spinnaker’s was Canada’s first in-house brewpub.)

Ken brought out the final beer, with all of the Canadian history as our clues for this final beer. No one could guess it. It was a slightly hoppy, yet still malted amber colour. Ken unveiled it as Howe Sound’s Troller Bay Pale Ale (5.0%). Ken picked it because it uses the same recipe that John Mitchell used at the original Troller Pub. Influential beer writer Michael Jackson remarked that it’s the best pale ale made outside of Britain.

If you are interested in taking one of Ken’s classes there is one coming up in Victoria. Find out more here.