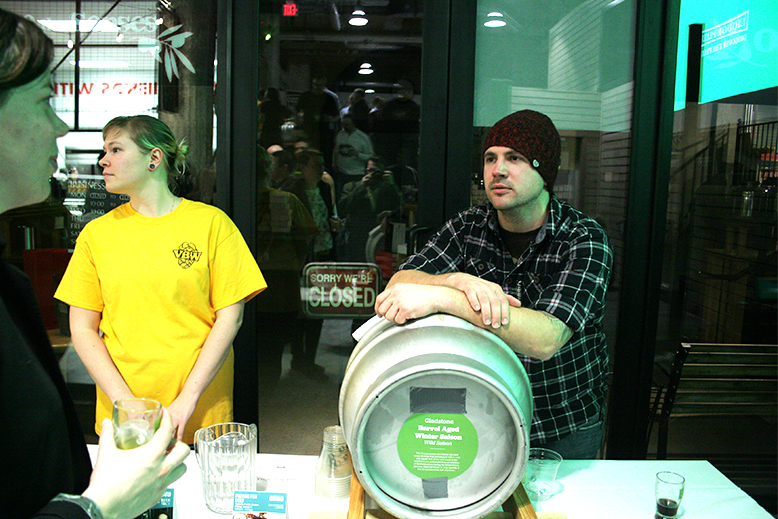 Night Casks is a special event during Victoria Beer Week because it is a time when brewers have a chance to show off works in progress and beer experiments to the public. Eventually these beers may become products, or maybe they won’t. Everything from lagers and saison beers on the light side, through the hoppy ales, and into the dark porters and stouts with hints of coffee and chocolate were on display last night. Even though I have strong predispositions toward certain types of beer, I decided to throw my judginess to the wind and try everything.

Here are a few winners (although there was plenty of amazing stuff). 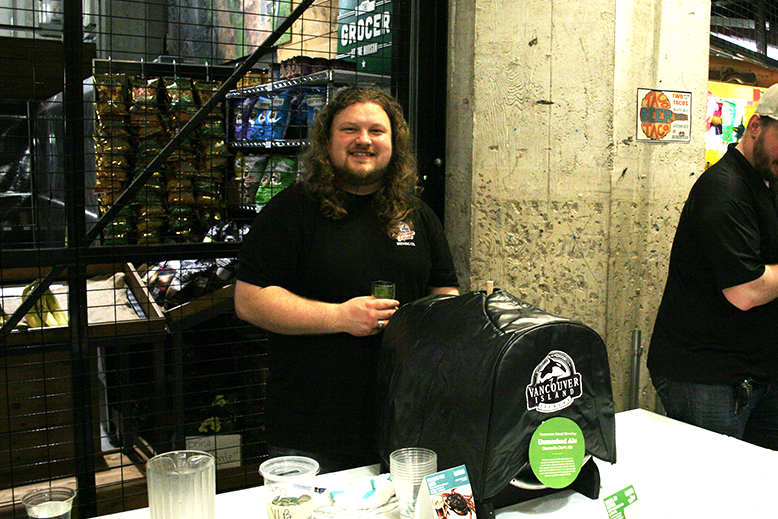 On the Dark Side:

Steamworks “Espresso Stout”. Often the coffee flavours in a stout taste like used coffee grounds, very roasty and a bit spent. In this case the coffee flavour tasted more like a cold brewed coffee for a slightly cleaner flavour. The brew features coffee roasted locally in Vancouver by East Van Roasters. 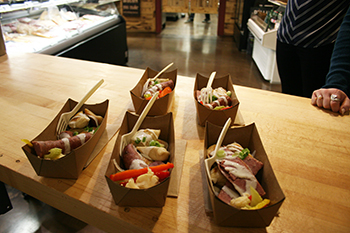 Food was provided by vendors at the Victoria Public Market. Pictured is the sausage plate from Ravenstone Farm

Vancouver Island Brewery “Unmasked Cascadia Dark Ale”. Graham Cooke is a new brewer at Vancouver Island. This dark ale was a small batch made especially for cask night. Although it was quite hoppy, it did not have that overwhelmingly bitter hop flavour that seems to be so popular nowadays. It was a very clean tasting ale, but still imbued with complexities.

On the Boozy Side:

Old Yale “Oatmeal Milk & Cream Ale”. This bombastic 9.5% ale made me feel like I was drinking a glass of cheese (in a good way). This is definitely a drink on its own type of thing, as opposed to even thinking of pairings. Interesting.

Not Quite Beer Category:

Todd Creek “Sidre Salvaje” Cider. This one was neat. The cider was made through a wild fermentation process, in the Spanish style. It was carbonated and had been infused with vinegar. I liked this a lot. I’m not a big fan of heavily carbonated, sweet ciders and so the murky tartness of this one appealed to me. If you are into the fresh pressed cider that one finds in apple country, then this beverage will make a lot of sense.

On the Light Side:

Gladstone “Barrel Aged Winter Saison”. Jonathan Parker came down from Courtenay to represent this many layered saison. It is aged in wine barrels for nine weeks. It has a refreshing flavour, yet avoids the unnecessary fruit infusion so many saison beers embrace. Although not available in bottles right now, it can be found on tap at Garrick’s Head, Smiths, The Drake, and The Churchill. Keep your eyes open for it!

Pictured at the top of the page: cask Jonathan Parker of Gladstone Brewing Co in Courtenay.

Superflux Cabana has opened upstairs at 804 Broughton St (the former location of The Livet). Featuring lots of Superflux beer and a menu that ...
Read More
January|February issue is on the stands! Pick up a copy, or read the digital version. Read ...
Read More
Living in Vancouver at this time of year you can’t avoid the rain (or snow), unless you stay inside all the time but then you miss so much! A ...
Read More