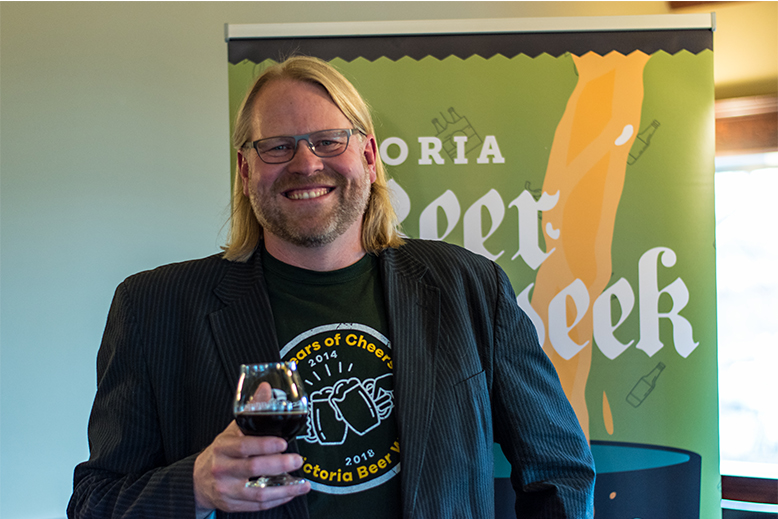 Victoria is once again readying itself to host the fifth annual Victoria Beer Week. As locals and beer geeks alike wet their palates for special events, Joe Wiebe—the co-founder and producer of the festival—gears up to welcome 50 breweries from across BC over nine days and 13 events from March 2-10.

Wiebe—otherwise known as the Thirsty Writer—seems steeped in excitement as I talk with him in Spinnakers Gastro Brewpub (or what he calls, the cradle of the beer revolution) a few days before the festival starts.

“We have 50 breweries, 150 volunteers, and a dozen staff and senior volunteers. For me, literally, the most challenging thing is keeping track of all the moving parts and making sure everything is happening the way it is supposed to be happening,” he says.

Additionally, to running Beer Week, Wiebe is also the author of Craft Beer Revolution: The Insider’s Guide to B.C. Breweries, and writes for the Growler, as well as Northwest Brewing News. Wiebe says he’s unsure if he ever expected the festival to get as big as it is today. “This has been a long time dream of mine,” he says. “It’s been growing and getting better and better so I’m happy that we’ve been able to get to five years.”

While tickets are selling quickly to the festival’s more popular nights—such as the Beer, Pizza, and Gelato event at Pizzeria Prima Strada on March 5, or Taco Tuesday in the Victoria Public Market on March 6—there are still plenty of events to go around. Wiebe says his favorite event from last year is the returning All About the Wood event; an evening showcasing the best barrel-aged beers that BC brewers have to offer.

“People like Four Winds and Strange Fellows put out barrel-aged beers every so often. Then they sell out and you think they’re gone, but they save some in their cellars,” says Wiebe. This year, 13 brewers will present their woody reserve in the Victoria Public Market on March 8.

Asking Wiebe what he thought was the most underrated event, he quickly pointed to Fishing for Beer on March 3. Regretfully, Wiebe himself is allergic and therefore stays clear, but he says that those attending always have amazing things to say. “You get great food, there’s a crab boil, and it’s a really cool vibe. It’s a little bit of a smaller audience, and the dinner is more of a sit-down event. I think that’s the most underrated event.”

Looking back on the years since the beer week started, Wiebe says there’s been a lot of triumphs, and a lot of challenges. While his most radical memory involved a Mad Max-themed cask event outside Wheelies Café (complete with Thunderdome regalia and burning barrels), his favorite moment is the opening cask night of the first ever beer week. Once the planning, panic, and organizing had subsided, Wiebe and his team got the evening up and running, despite last-minute pressures. He says he stopped and looked around and realized this was perhaps the best beer event he’s ever been to. “That sounds arrogant, but I don’t mean it that way. I was amazed it had all worked. The room and the vibe was just so good that it was my favorite moment from any year: that first moment of realization that we had seceded.”

Considering there is something for everyone at Beer Week—from seasoned beer geeks to casual weekenders—it seems likely that the success of Victoria Beer Week will continue for some time to come.

The article on L’Apéro in the May|June issue should have stated Chef Andrea Maiolo staged at The Courtney Room and Zambri’s and that he held the ...
Read More
May|June issue on the stands. Read ...
Read More
Cooking a holiday feast can be strenuous. With the neverending array of preparations, followed by hours toiling over hot ovens and flour-covered ...
Read More