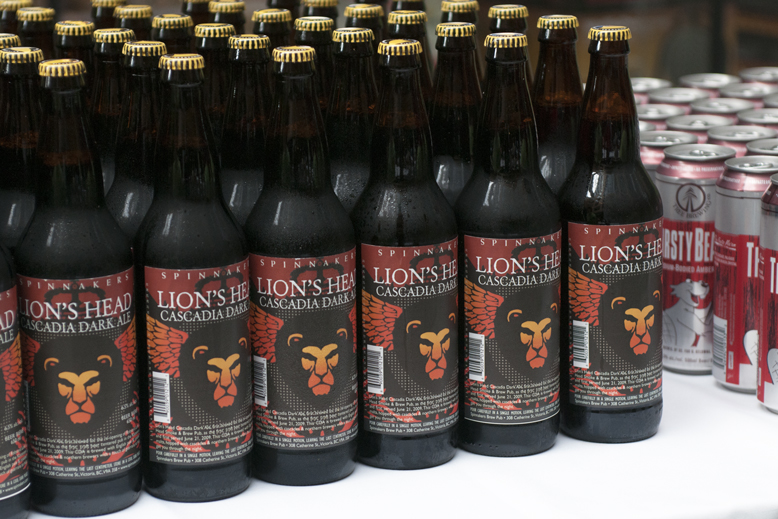 After Victoria Beer Week we’re feeling withdrawal symptoms. This week is underwhelming compared to the previous week’s amazing Beer Week events. EAT was lucky to have attended a number of events, a special brunch, a talk and some tastings (you can read about the history class here). Next up was the Beer and Cheese Night at the Garricks Head pub.

Beer with cheese is like alchemy – the whole being better than the two separate elements. Why does beer work so well? A fizzy beer works with the fatty cheese by cleansing the palette between bites. At Beer & Cheese.. and More Beer, an energized crowd was packed into the Garricks Head Pub. Various delis and their cheeses were paired up with a local brewery and their beers. People went from station to station trying the recommended beers with the specified cheeses. This was not only educational but a load of fun. A few of my favourite pairings were Driftwood Farmhand with a sharp sheep’s cheese Pecorino Crotonese from Ottavio; and Longwood’s Stoutnik  – a Russsian Imperial Stout with a semi-firm cow’s milk Bleu Coffee Java Jill from Little Qualicum Cheeseworks.

The town hall meeting took place on Thursday night, was well attended, and had a great panel of experts on the subject. Joe Wiebe was the moderator for the night. Topics ranged from chatting about gluten-free beers, to how the smallest brewery survives, to how the breweries are really just good friends when it all comes down to it.

Paul Hadfield of Spinnakers made some very good points about the new legislation on liquor laws—he has such good insight to how a brewery/pub/liquor store works and brought up points that I hadn’t thought about when reading through the government’s press release, such as being able to sell kegs at stores may not be as good as it sounds (if they are a smaller scale brewery they may not be able to put out enough kegs).

There was also a display of some very cool artwork for “bottle labels” by some of Victoria’s best graphic designers.

– One of the fantasy beer labels

On the final day, Victoria Beer Week hosted an amazing brunch at the Atrium courtyard downtown. It was a bright sunny day, which helped make for a fantastic experience. The organizers had set up with a long table style, the tables snaking throughout the courtyard. Each course had been created by a chef who is part of the Island Chefs Collaborative. Each chef was paired up with a local BC craft brewery. Before a course was brought out, it was introduced by the chef and brewer so that we would understand why they created it the way they did.

– Some of the selection on hand.

– Some of the Chefs from the Island Chefs Collaborative joke around behind the scenes before the brunch started (Vista 18’s Garrett Schack telling a joke he’s reading from his phone).

– Ryan Malcolm who put together the brunch, and is also part of Salt Spring Island Ales

Till next year Victoria Beer Week!

September|October issue on the stands. Read ...
Read More
August 22, 2022 — Staff, volunteers, and board members from Victoria’s Belfry Theatre have raided some of the best local wine cellars to find ...
Read More
VANCOUVER / FRANCE If you’ve never heard of the Bocuse d’Or, you’re not that interested in food. This worldwide professional ...
Read More