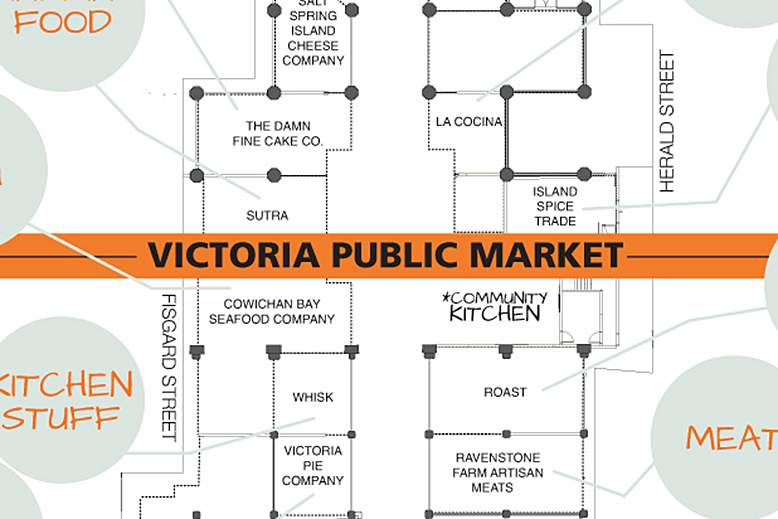 FROM: EAT Magazine November/December
EAT’s Rebecca Baugniet invites you on a circle tour of the brand-new Victoria Public Market.

Strolling through the new Victoria Public Market in the first couple of weeks after its mid-September opening was both a feast for the senses and a good exercise for the imagination. The long-awaited Victoria Public Market was still very much a work in progress when I took my circle tour to meet the permanent vendors—those who have opened and those who are coming soon—anchoring the new public market.

As you walk in the front doors from Douglas Street, the Salt Spring Island Cheese Company greets you with a generous spread of samples. All their goat cheeses, from chèvres, feta, a few surface-ripened cheeses and a hard cheese, are made at their farm on Salt Spring. A carefully chosen selection of crackers, olives and preserves provide all the components for an elegant cheese board in one spot. www.saltspringcheese.com

The empty space beside the cheese shop will soon be filled with cake! Marcene Von Ravenhurst first knew she wanted to open a cake shop after presenting a memorable dessert at an event. “The definitive moment was at a party where I delivered a layered meringue cake with violet cream and blueberries within a halo of spun sugar and edible flowers.  Everyone went quiet when it was served.” The Damn Fine Cake Co. was born in 2006 but had been waiting for the right retail space to become available. Von Ravenhurst says that “after meeting with Townline and the Victoria Public Market Society, it was absolute—it found a home and I found a fantastic work environment.” In addition to their selection of cakes, Damn Fine plans to offer daily soup, salad and sandwich options for the lunch crowd, and crêpes served in a stack with cherry preserves “like my Gramma used to make… You’ll need a good coffee to go with those!” (You can get one at 2% Jazz, in the back right-hand corner of the Hudson. The entrance is on Fisgard). You will also be able to find the Il Dolce Gelato kiosk sharing space with the cake.

Next door is Sutra, Vij’s highly anticipated Victoria outlet. Mike Bernardo, chief operating officer and wine director at Vij’s for the past 12 years, is the owner of the new canteen and says it has been an overwhelming experience to be one of the first vendors at the market. “Victoria is such a great food city and we are excited to round out the diversity of the market.” Bernardo’s staff trained in Vij’s Vancouver kitchens and is making the popular pakoras, cassava fries, naan and drinks in-house. You can find Vij’s frozen entrées, as well as his cookbooks and spices, here. Chai caramels from Vancouver’s The Candid Confectioner are also available.


Beside Sutra is the Cowichan Bay Seafood Company’s brand-new Victoria shop, selling an impressive selection of local and sustainable (Sea Choice and Oceanwise certified) seafood. Owner Greg Best says, “We had been looking for a Victoria retail space and thought the market’s concept was a good fit for our business. We liked the idea of sharing space with other local farmers and producers.”

The next vacant spot is destined to become home to Victoria’s newest kitchen shop, Whisk. This is the new venture of Marion Osberg, who has many years’ experience working at Haute Cuisine. With the planned closing of Haute Cuisine, Osberg saw the opportunity to open her own shop, stocking many of the items that were popular there, such as Fiestaware, kitchen gadgets, and Rosti bowls and utensils. Osberg is planning  a December 1 opening.

A few steps over is the nostalgia-inducing Victoria Pie Company. Founded by Robin Larocque, who discovered her passion for pie-making after a resoundingly successful attempt to make her French-Canadian husband a tourtière, the baker is on a “food rescue” mission—to save beautiful local produce just past its prime. Fruit that would otherwise go to waste gets turned into delicious pie. Hop onto a stool at their pie counter for a slice with a glass of iced tea, or get a full pie to go. They also do quiche and salad combos at lunchtime.

Up the stairs to your right is the large retail space that has been earmarked for the greengrocer. Townline is building out the space, which will be run by veteran greengrocer Linda Freethy. Freethy worked for Red Barn for many years and has well-established connections with local farmers and producers here on VI.

Wafting across a sitting area is the smell of freshly baked artisan breads and treats at the French Oven. Husband-and-wife team Sandra VanVliet and Nick Castro were completing their first season at the James Bay Farmers Market, and intended to sign on to the market as kiosk vendors, when it was suggested that they might occupy a permanent retail space with seating area. Castro had experience working as a baker in France, so the leap from kiosk to permanent vendor did not seem too daunting. VanVliet manages the retail space while Castro takes care of the baking at their production kitchen a few blocks away from the market. Plans to set up a commercial oven onsite are in the works.  Baked goods on offer are firmly rooted in the French baking tradition—expect baguette and sourdough loaves, croissants and pain au chocolats. And if you happen to be in the company of a small child, they will be offered a hand-sized pastry knot, on the house.

Heading back down the steps, we pass by the entrance to Olive the Senses (open since last September; see Joseph Blake’s EAT story in the Jan./Feb. 2013 issue), and we arrive in front of the just-announced Ravenstone Farm Artisan Meats. The partners behind the new butcher shop are Trevor Hooper  and Grant Smith and his son Logan. The Smiths farm the 23-acre Ravenstone Farm in Qualicum that will supply a good portion of the pork, turkey and lamb that will be on offer in their shop. Hooper (whose name may ring a bell; he was the chef-owner of Vancouver’s Raku) has a nearby farm and will be supplying the chicken. Ravenstone plans to open January 1, 2014.

Neighbouring the butcher shop is Roast, Victoria’s new rotisserie destination. The latest venture of George Szasz (Stage) and Ryan McGregor (Canoe), Roast has garnered a cult following in record time and from a full spectrum of demographics. Watching Szasz attentively slice the porchetta, making sure each portion gets its fair ration of crackling, I overhear a middle-aged woman tell her friend, “It’s just like my mother used to make.” The sight and smell of proper roasts—be it beef, pork, chicken or lamb, do seem to trigger the strongest kind of food nostalgia, and the meat at Roast, served as a sandwich or in a bowl with a side of kale Caesar or traditional roast veg, more than delivers. I suspect they may be unwittingly unleashing a resurgence of the Sunday dinner. In addition to supplying an old-fashioned taste of home to go, Roast is also available to cater events.

Tucked in beside Roast sits Victoria’s new Community Kitchen. The site of many chef demos over the market’s opening weekend, the kitchen is VIHA- approved and available for rent around the clock. Fees are on a sliding scale, with the goal of supporting local, food-related non-profits, social enterprises and community initiatives.

Just beyond the Community Kitchen is the Island Spice Trade, owned and operated by Vancouver Island Salt Co.’s Andrew Shepherd. In addition to his own infused Canadian sea salts, Shepherd is creating unique spice blends and carrying Organic Fair herbs, chocolates and soda syrups. And what could be more fitting, next door to a spice shop, than an authentic Mexican restaurant? Named La Cocina de Mama Oli for its chef, Mama Oli is Olimpia Cisneros, a native of Guadalajara, Mexico. Tortillas are made on site, and a specialty of Guadalajara—carne en su jugo (meat in its juice)—will be a regular menu item.

The last stop on the circle tour is a few steps past the entrance to Smoken Bones. Silk Road, named “Canada’s most beautiful tea store” by Wine Access magazine, sits front and centre at the market. Started by tea master Daniela Cubelic in 1992, Silk Road now has a second location with a selection of their organic teas and teaware.

The Victoria Downtown Public Market Society, Townline and the vendors are all doing their part to make this endeavour a success. Now it is up to us, the public, to see that it thrives.

The article on L’Apéro in the May|June issue should have stated Chef Andrea Maiolo staged at The Courtney Room and Zambri’s and that he held the ...
Read More
May|June issue on the stands. Read ...
Read More
“From smokin’ sweet to hell-fire and damnation, chilies heat up the kitchen.”   Hatch, New Mexico, is a dry and dusty little ...
Read More