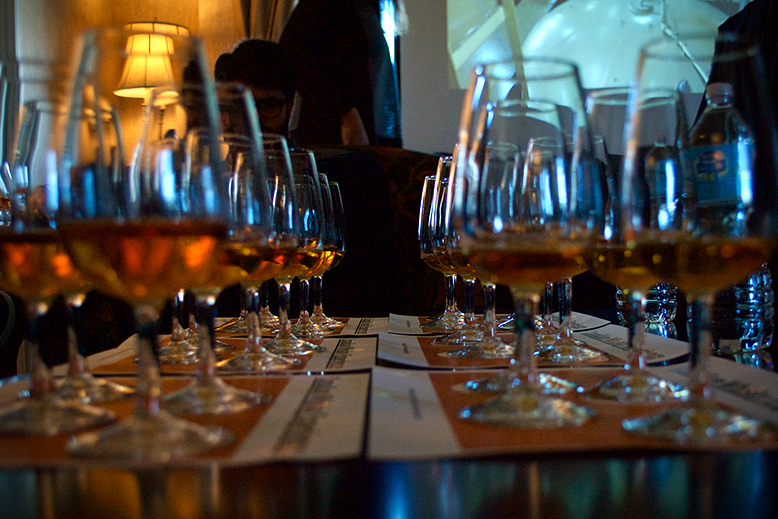 Another year of the Victoria Whisky Festival wrapped up this past weekend. While Victorians, et al., came in droves to have a dram of the golden spirit, I was fortunate enough to sneak a rare taste of some exclusive Canadian whiskies being released later this fall.

The Northern Boarder Collection is a range of four exclusive whiskies by Corby Spirit and Wine Limited. Included are the Lot No. 40 12-Year-Old Cask Strength, Pike Creek 21-Year-Old Single Malt Cask Finish, Gooderham & Worts Little Trinity 17-Year-Old Three Grain Blend, and finally, J.P. Wiser’s 35-Year-Old. This was the first public tasting of these blends, as each one will be released in a limited run this coming September.

“We tried to elevate Canadian whisky awareness,” says Don Livermore, master blender for the four whiskies. “We do make great quality sprits, but it’s very tough to shout it out as a Canadian. We are very apologetic by nature.” Livermore seems to be equal parts artist and mad scientist, holding a MS and a PhD in brewing and distilling from Edinburgh’s Heriot Watt University.

Asking him why these four whiskies were chosen, Livermore says it was a natural progression more than anything. “We wanted to pick on the pillars of Canadian whisky,” he says. Each represents the versatility, as well as the history, found intrinsically in Canadian whisky brewing.

This historic aspect of the craft was a surprising focus at the tasting. “Canada is really built on whisky,” says Livermore, pointing out that early whisky brewers were among the largest taxpayers in early Canadian history. “Canadian whisky has a great story that has never been told.” The Gooderham & Worts Little Trinity, for instance, is named after James Worts and his brother-in-law, William Gooderham who built the Little Trinity Anglican Church in the Corktown neighborhood of Toronto in 1843. The building came about because their workers who could not afford the pew fees at neighboring churches. Keeping true to the Trinity name, the whisky is made with only three grains—rye, corn, and wheat.

Each whisky brought something unique to the tasting. The Pike Creek, for instance, had a leaner quality to it. While smelling slightly of green apple—due to ethanol acetate, as Livermore points out—it ended with a honey-like sweetness at the back of your throat. The Lot No. 40, on the other hand, had a bit of fizziness to it. Being aged in brand new virgin oak casks, it was bolder than the Pike Creek, and reminiscent of dried fruit or quince. The Gooderham and Worts, having no barley, lacked the nutty quality of others, but more than made up for it in it’s sophisticated notes of blackcurrant and orange marmalade. Finally, the oldest and most interesting of the bunch, the J. P. Wiser’s 35-Year-Old had an oily, beeswax richness to it. Stone fruit flavors like peach and mango played off the creamed honey feeling it left in your mouth.

For anyone eager to get there hands on one of these true expressions of Canadian whisky, you may have to wait a few seasons. Despite the limited nature of each selection, each bottle will supposedly be offered at an accessible price (give or take $100). Considering how much you will pay for a single-malt scotch of a comparable caliber, this is a steal. Besides, what you’re buying is not just Canadian whisky, but a small bit of Canadian history.

Note: Masterson’s 10 Year Old Rye has been named the Canadian Whisky of the Year.

The list of all the winners is now available at http://www.canadianwhisky.org

For the ninth year in a row Rancho Vignola is setting up its Vancouver Island Harvest Sale here at the Mary Winspear Center in Sidney. Many of ...
Read More
Season’s Greetings EAT readers! We at EAT are looking forward to all the wonderful seasonal baking on offer around the city. One of the great joys ...
Read More
Masterclass Candied Citrus Holiday ...
Read More
November | December issue on the stands. Read ...
Read More
Wharf Street Production’s Health, Wellness, and Sustainability Festival keeps growing. Now in its third year and scheduled for the Victoria ...
Read More