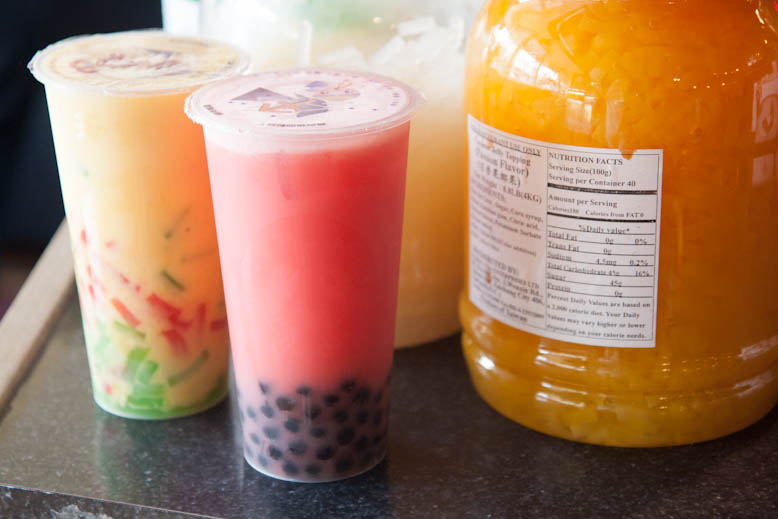 Tea is one of Victoria’s most fundamental drinks. Its legacy extends from herb and pine teas brewed by the First Nations, to the colonial English traditions that help define the city’s soul. I’ve long tried to connect with this part of Victoria; I’ve put plenty of scoops of Silk Road through a loose-leaf infuser, and I’ve tried almost every London Fog and Chai Tea Latte in the 250 area code. But one type of tea has really clicked for me: Taiwanese bubble tea.

Invented in the 80s by an enterprising teahouse owner, bubble tea has acquired a whole set of mechanical contraptions, flavouring options, and adulterants over the past thirty years. In it’s simplest form, it is black tea with milk, served with balls of boiled tapioca the size of dimes. It’s the perfect drink for a sunny afternoon of work, providing a minor jolt of caffeine and sugar without the heat and intensity of coffee, or the weight and sugar of a Booster Juice or Orange Julius.

There are several spots in the downtown core where you can find it, including La Tea Ah! on Fort, and the Simply Orange franchise in the Bay Centre food court. But there are two spots that have been serving bubble tea in Victoria for almost a decade, and both of them add a little something special to the experience.

If you spend any time around international students, you’ll have seen plenty of bright red Hope Key stickers adorning everything from binders to notebooks. This old-school guerilla marketing campaign is evidence of “Auntie” Brenda Tang’s boundless enthusiasm and charm, which make bubble tea not just a thirst-slaking treat, but also a comforting and reassuring experience for the homesick. 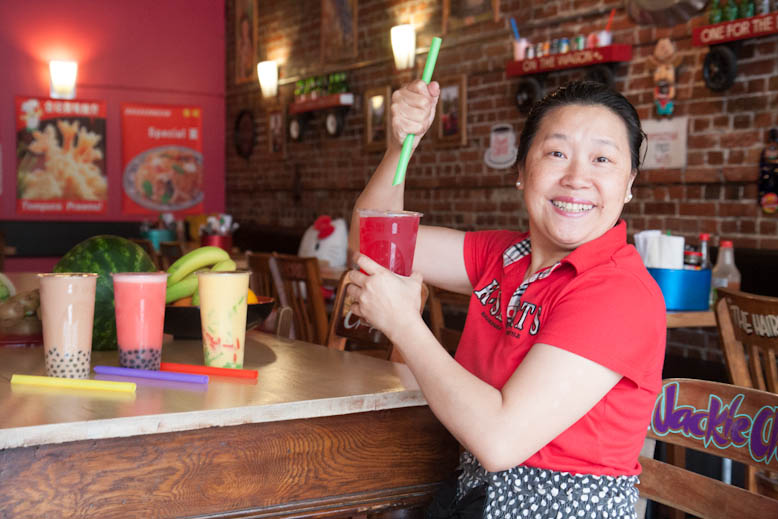 “When people drink bubble tea, almost 100% they are happy people,” Brenda told me. “Or even if they’re not very happy, after they drink our bubble tea they’re happy.” Really though, whether you buy bubble tea or not, it’s hard to wipe a grin off your face after a few minutes’ conversation with Brenda and her brother James.

Hope Key’s main bubble tea claim to fame is the self-serve bar, and the myriad array of options available, from non-dairy milk, to fresh fruit, to the many flavours of coconut jelly. “We can make whatever you want, just ask us, we give you paper and you can write it down,” says Brenda. “I don’t want milk, I don’t want tea, I don’t want a tapioca, I want a bubble tea without a bubble… Fine! No problem! Soon as you’re happy! I tell them, soon as you smile, happy, and you can have whatever you want!”

The fresh fruit options, including watermelon and avocado, give the tea a wonderful body and some natural sugars as an alternative to the powder and syrup of classic bubble tea — though Hope Key does still have those, of course. It’s all up to you.

On the other end of the city lies Canada’s oldest Chinatown, where former bartender Andy Wall has run the very logically titled Bubble Tea Place for fifteen years. “Customers basically built the business and I just listened to them,” says Andy. “Originally it was Panacea, the Furniture Art Company. Cell phones were just getting really popular at the time and I just kept noticing people saying, “I’m at the bubble tea place.” I heard this about a thousand times and said you know what, I’m changing the name, it’s the bubble tea place.” 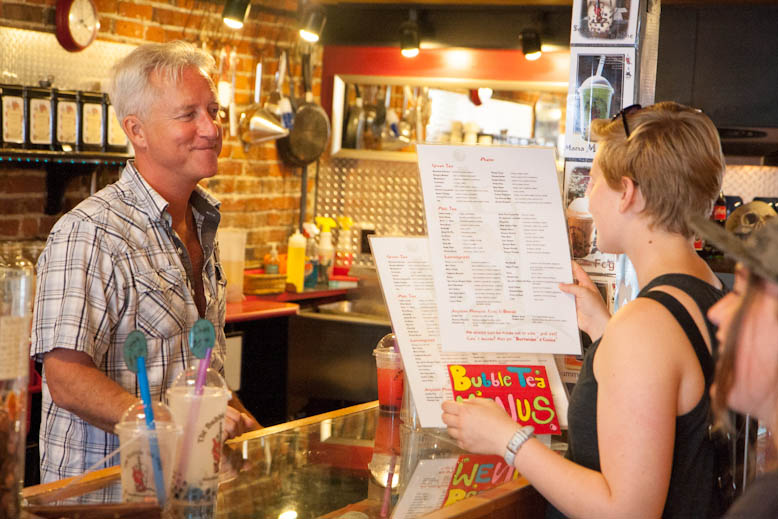 While Andy might seem the polar opposite of Auntie Brenda, his bubble tea purism has made his shop the definitive source for many. Fresh fruit, ice slush, these don’t pass muster at The Bubble Tea Place. “I don’t wanna confuse the issue,” he says. “This is what it is. It’s not a slushie or fruit smoothie, it’s a tea drink. So if you wanna go somewhere else that’s cool, I’m not doing it.” 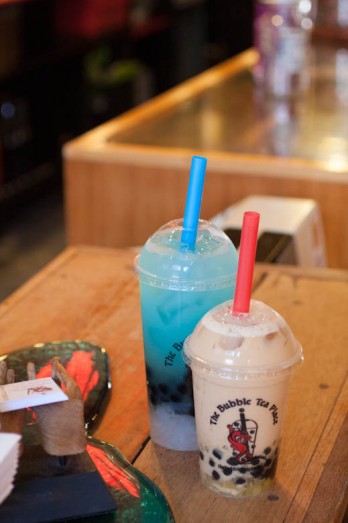 All that said however, he does indulge in flavour mixing, which many bubble tea spots deem untraditional. Andy and his loyal staff of student bartenders are always coming up with new combinations, with eyebrow-raising nicknames to match. The honeydew melon and vanilla is my personal favourite though embarrassingly I’ve forgotten the name. Lately Andy’s explorations have gone into lemongrass, which he says heightens the taste of the other ingredients. “It really brings out the flavor in things so I don’t have to use so much of the fruit syrup, so there’s less sugar involved, it’s a little bit healthier.”

My best memories of bubble tea as a Vancouver kid feature ice-cold cherry flavour tea in between shifts at a bakery on Main Street. As the weather deteriorates into rain, the refreshing nature of cold bubble tea tends to be less relevant — but Andy’s got other ideas. “Basically we do everything on the menu hot as well, and we’ve started steaming drinks. The pearls just soften up a bit in the hot liquid and it becomes even more of a comfort food.”

Now, if only they had a pumpkin spice flavour. (Just kidding. Or am I?)

Superflux Cabana has opened upstairs at 804 Broughton St (the former location of The Livet). Featuring lots of Superflux beer and a menu that ...
Read More
January|February issue is on the stands! Pick up a copy, or read the digital version. Read ...
Read More
The Number Creative has crafted this fantastic video of Victoria Beer Week for everyone to enjoy, touching on all the different events that happened. ...
Read More