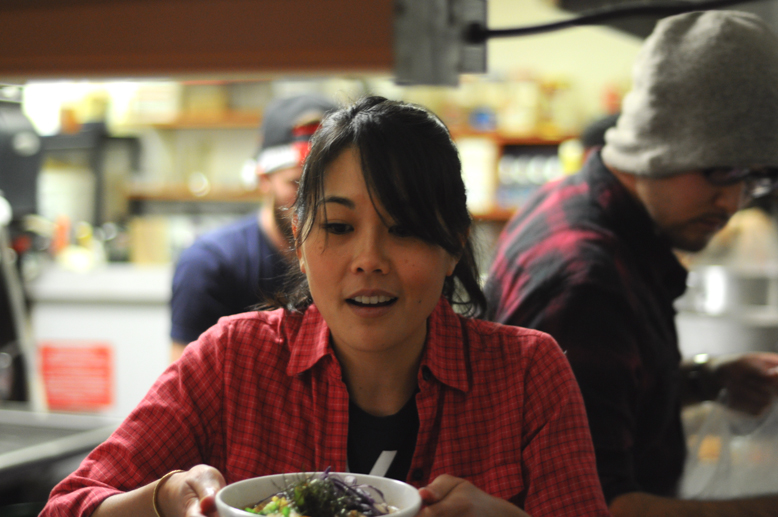 I’m heading to a pop-up on a chilly Saturday night in Royal Oak. By pure chance, I’ve caught wind that a ramen pop-up event is being hosted on two nights by one of my favorite local diners, The Village. The Estevan Village event was the night prior (which sold out in 12 hours, I’m told), and I’m on my way to the Royal Oak iteration. I have no idea what to expect: a ramen pop-up hosted in a once-was-Jewish-diner? What’s more, a duo all the way from Brooklyn is the one being featured here. I mean, fundamentally, I understand how people can get from Point A to Point B (you know, planes or cars), but how is a ramen pop-up duo from Brooklyn possibly connected to a yyj breakfast joint? I’ve a few questions, I’m cold, it’s dark out, I’m listening to Dune on tape while driving, and I’m also pretty hungry — I’m feeling many things.

As expected, The Village is a flurry of activity. The Village owner Jason Chan greets me and immediately pulls me into the kitchen. About eight (maybe more?) individuals are crammed into the kitchen, and it is busy. Hands are shaken, names are thrown about, and I’m told that pretty much everyone here is family. I’m soon introduced to the masterminds behind the ramen I’m to experience later in the evening — Aaron Lloyd Barr and Chris Konya who, together, compose Menma Ramen. 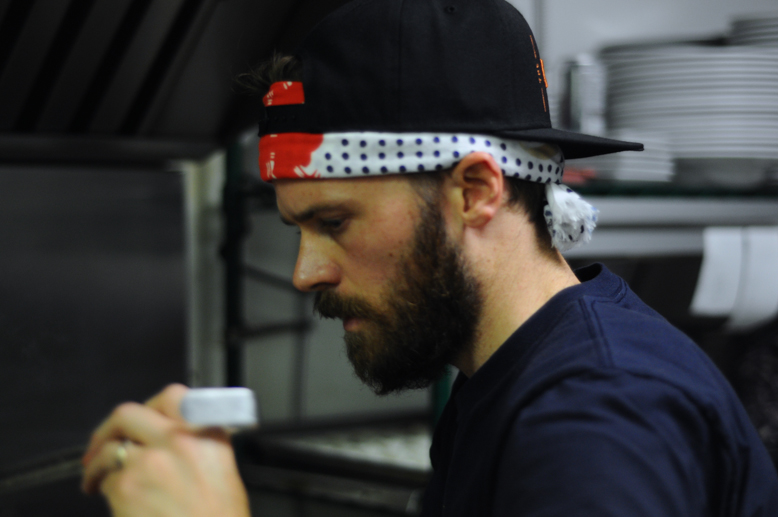 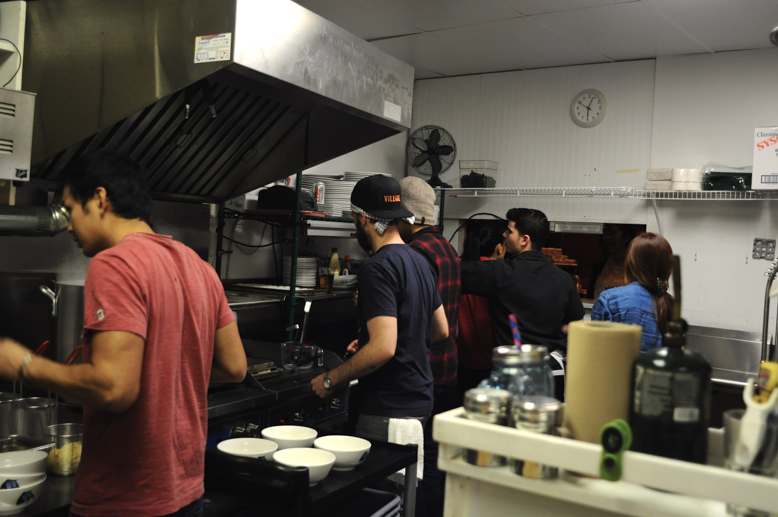 The kitchen was a busy one.

How did they get here? Honestly, I’m not really sure. Chris grew up in LA, and her family (from what I can tell) is now scattered across the Pacific Northwest, with her brother living in Seattle. Somehow, there’s a West Coast connection to Jason of The Village. I’m still a bit confused, but I’m not sure it matters — the point is, two really talented ramen perfectionists from Brooklyn came across pretty much most of North America so a few very, very lucky people could try some exceptionally great ramen.

There’s been a lot of talk of ramen, as of late. About a year ago, The Mind of a Chef devoted an entire episode to it; I recently talked about it in my “Johnson’s Jewels” article; Foo Ramen opened up just last year; and Lucky Peach recently devoted an entire day’s worth of posts to a series “The State of Ramen” . With just a tidbit of research, the complexity and passion behind ramen becomes clear — one really gets the sense that it’s an incredibly nuanced, and rewarding, culinary craft that rewards experimentation, a constant desire for refinement, and a borderline scientific approach to the whole process.

The complexities of ramen, Chris tells me, made Chris and Aaron’s first venture into the ramen void a difficult one. “We tried making ramen once and it was just soup. We waited a year, tried making it again, another bowl of soup — it was good, but it took us all friggin’ night to make it, and it still just tasted like soup.” Keen on making some legitimately good, homemade ramen, Aaron and Chris reached out to Ivan from Ivan Ramen — an enormously talented ramen tech based out of Brooklyn. Ivan, Chris tells me, was the key to their ramen success, “A lot of ramen chefs like David Chang just throw everything into a big pot, and then at the end you don’t know what went wrong when your broth isn’t right. Here, we separate each flavor, and when you can taste them individually, and you can start adding or taking away certain things, and that’s how we got our first bowl — and there’s like 65 ingredients, so why throw everything together?” Having made that first successful bowl of ramen, soon enough the thought occurred to both Chris and Aaron. “One day, we were on the subway riding home, and Aaron was like ‘Hey man, we should do a pop-up.’” 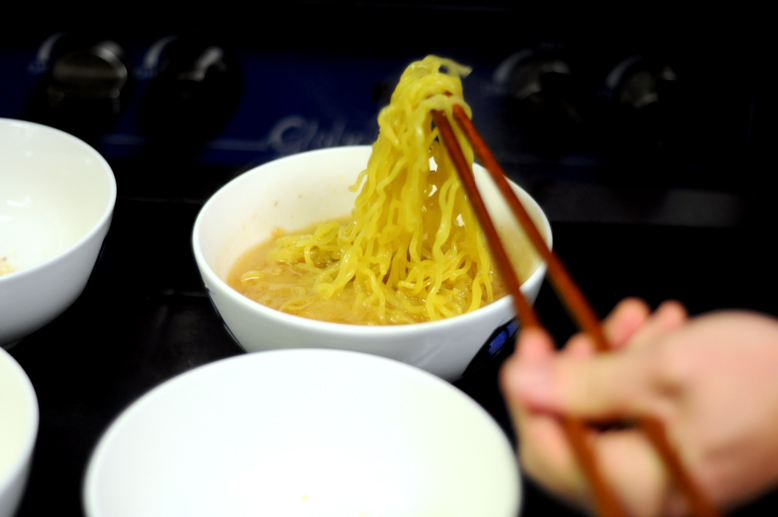 Noodles are key, so Chris and Aaron don’t take the matter lightly. Sun Noodle provides the duo with this crucial element.

And here they are. Aaron gives me the run-down on their ramen, and it’s as complex to grasp as one might think. Instead of going for a traditional Tonkotsu-style ramen (re: pork bone broth), Aaron and Chris have opted for a “triple” blend broth consisting of three styles of broth. “We make it using pork bones that we’ve ripped down and boiled for 48 hours,” Aaron tells me, “and we also use a really clean chicken broth made from whole organic chickens, and then a Dashi .” As for the noodles, Aaron and Chris haven’t gone the “make your own” route (far too laborious, Aaron tells me, and I really do believe him), and have instead opted for Sun Noodle — a Hawaii-based artisan ramen noodle maker established in 1981. “They’re really geeky and science-y about noodles,” says Aaron, “I literally walked him through how fatty our broth was, what it’s like, and they now make noodles that are spec-ed specifically for our ramen.” 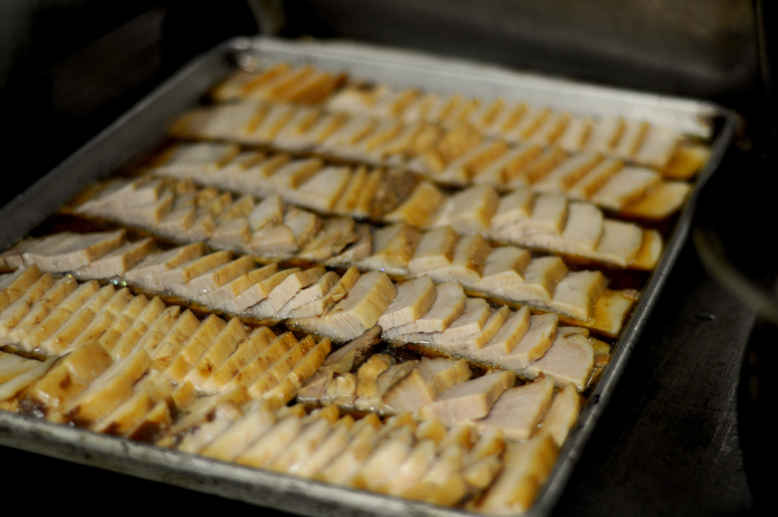 In the short 15 minutes that I spend with Aaron and Chris, they offer up a wealth of detail about their ramen, and are eager to answer any of my questions — no matter how uninformed — despite approaching that “oh-my-god-we-open-in-10-minutes” point in the evening. 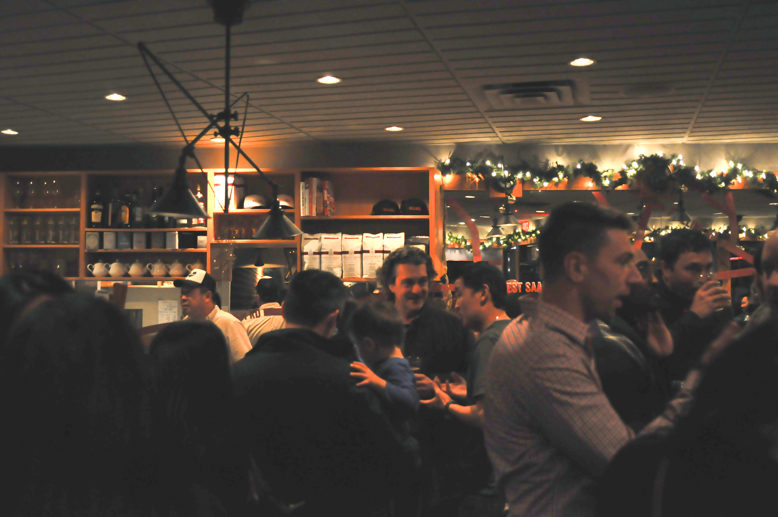 The Royal Oak Village was packed, and the energy was high.

Despite a keen desire to ask every question that I possibly can, I end up making my way back into the dining room. With beer from Hoyne on tap (free with ticket purchase), a DJ is jammin’, and I end up finding a seat with the owner of Kuma Noodle, Cam (oh, let me just pick up that name I dropped there). The place, it should be noted, is packed — like, really packed. If The Village — whether in Estevan or Royal Oak — is known for delivering a top-tier breakfast in a warm space that feels like home, this is a completely different (but still very comfortable and welcoming) kind of vibe, and it’s great. 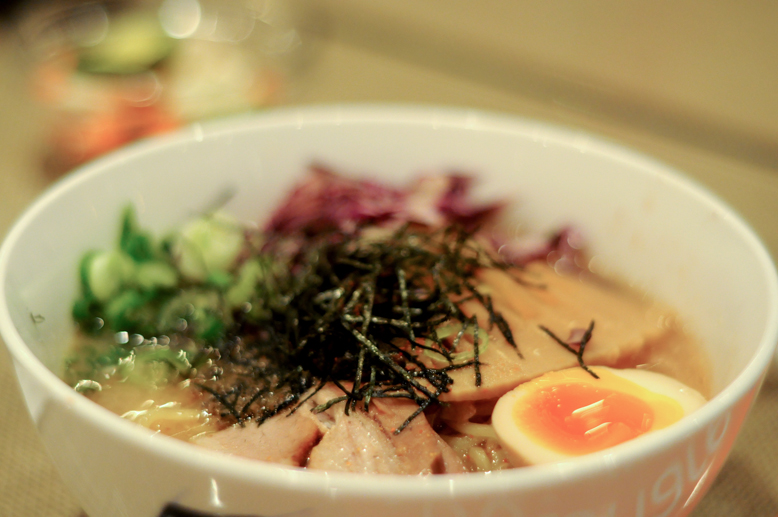 As for the ramen? Excellent, and unique from anything else I’ve tried. The broth is as nuanced and complex as Aaron and Chris suggest, and there isn’t that huge punch of salty flavor that can sometimes happen with ramen. The broth is surprisingly light, but that’s not a bad thing — it’s a lighter affair, a bit “less dirty” than other types of ramen, Jason comments, but it’s still satisfying and rich. The pork is tender, absorbent, and fatty — very good. But the highlights here are, by far, the noodles and the traditional soft-boiled egg. The Sun noodles are, in my books, about perfect: chewy and just a bit sweet, they’re exceptional. The egg is soft and explosive with flavor — salty and sweet, the yolk magically achieved that mercurial point between solid and liquid. Topped with green onions, soaked cabbage, finely chopped nori, and — the duo’s specialty — cooked and treated Menma (bamboo tips), it’s a beautiful bowl of ramen. A special thing.

I’ve always loved The Village (full disclosure: The Village was one of the my hidden gems in my recent articles), and the fact that Jason and the rest of the talented Village crew are willing to put on these kinds of events further cements my opinion that they’re one of the best things going in Victoria. More pop-ups are in order, Jason tells me (look for a Pho one in the New Year), so keep your eyes peeled on this space.

Looking for Ramen in Victoria?

Kuma Noodle offers my personal favorite ramen in the city. The soya broth, in particular, is exceptional.

Foo Ramen provides solid ramen to Victoria’s downtown. The price point is a little higher, but the ingredients — the pork belly, in particular — are excellent.

The Next Modern Japanese Cuisine opened just this past November in Cook Street Village. This place is really worth checking out (look for a “First Look” here at EAT in the near future). As for the ramen, it’s a lighter affair than what’s on offer at Kuma or Foo, but still satisfying and full of flavor. Recommended!

Lucky Peach regularly feature articles on ramen on their website. Here’s all that Lucky Peach has to offer in the realm of ramen:

The article on L’Apéro in the May|June issue should have stated Chef Andrea Maiolo staged at The Courtney Room and Zambri’s and that he held the ...
Read More
May|June issue on the stands. Read ...
Read More
A chef once told me “you are what you cut,” and Cindy Dreger of Ingredients Health Food Store and Apple Cafe shares this philosophy. ...
Read More