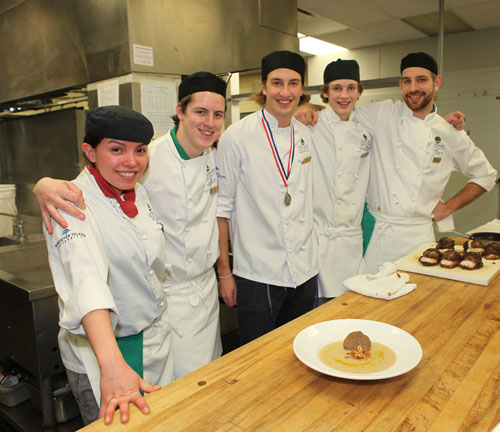 Support from culinary faculty a key ingredient in their success

With the support of VIU’s dedicated Culinary Arts faculty, students are sharpening their cooking and baking skills to prepare for a variety of culinary competitions that will take place over the next few months.

Brian Kremer, Adam Long, Shawn Saunders, Allegra Jimenez and Connor Berg, are among the students who will be putting hundreds of collective overtime hours in, to perfect recipes and dishes they hope will lead to medal success at the different competitions.

Kremer, graduating this month, has already proven his cooking mettle by taking silver at the recent Vancouver Hot Competition. He’s now back in the kitchen preparing for more competitions and attributes his dedication – and success – to VIU’s instructors. “If I had gone it alone in trying to prepare for the recent Vancouver Hot Competition, I wouldn’t have done as well as I did,” says Kremer. “I started preparing a month before and stayed for hours after class, trying to get it just right. My instructors were a huge support, also staying after class in order to give me feedback and suggestions on how I could make the dishes even better.”

Other students feel just as strongly as Kremer about the support they receive from VIU’s instructors.

“VIU’s program is great as the instructors encourage us to set high goals and then help us reach those goals by putting in extra time after class,” says Long. He’s a Grade 12 student taking part in the school district’s Career Technical Centre, which allows students to begin post-secondary trades and technical programs during their Grade 12 year. Long is planning to compete in the Skills Canada High School Competition in April. There, he’ll be tasked with preparing a two course meal in three hours. “We’re given the menu and rated on how well we prepare the food, if we put our own twist on it and, of course, how good it tastes.”

Long will be facing some friendly competition at the Skills Canada event as his classmate Berg will also be competing and both are going for gold. Berg isn’t worried about their rivalry though, as he thrives on the pressure of the competition and the fast paced environment. He also competed at the Hot Competition in Vancouver and appreciates that their instructors travel with them, cheering them on from the crowd. “It makes a huge difference to have a friendly face out there, as the competitions are very intense.”

According to Culinary Instructor, Chef Debbie Shore, not every culinary program encourages students to compete. “Competitions aren’t part of the curriculum, but we feel it’s really important to create these opportunities for students. It’s a great way for them to hone the skills they’re learning in class such as team-building. Competitions also give students an opportunity to network with chefs from across Canada.”

One event all five students plan on entering is The Pear Excellence Culinary Student Competition. To enter they must create and submit a one-of-a-kind recipe using pears. The winner from each region (VIU’s students compete in the BC region) will head to Ottawa to prepare their dish in hopes it captures the taste buds of the judges and nets them the $2,500 grand prize and a $300 bursary to the winning school.

Jimenez is already busy planning what she hopes will be the winning recipe. “Sometimes I’m working for six hours after class to prepare for both the pear competition as well the Skills Canada competition for post-secondary students. It sounds like a lot, but for me the competitions are an opportunity to test myself. I also appreciate having extra time with the instructors because they help me translate the ideas I have in my head into reality.”

Saunders agrees, and also feels the competitions are a great place to network and meet potential employers. That’s why he’s planning on putting in at least 100 extra hours to prepare for a Competition in May. “I’m a firm believer in the idea that the more you put in, the more you get out and our instructors encourage us to do that by also putting in extra hours. It’s a big commitment but they’re always willing to help us out.”

With Phase 2 beginning, restaurants and patios, tasting rooms and coffee shops are reopening. This is an ongoing process, with many changes, so we ...
Read More
Somm In The City : Montreal One of the best parts about being a sommelier is eating at other restaurants. Whether they are in my own city or another, ...
Read More