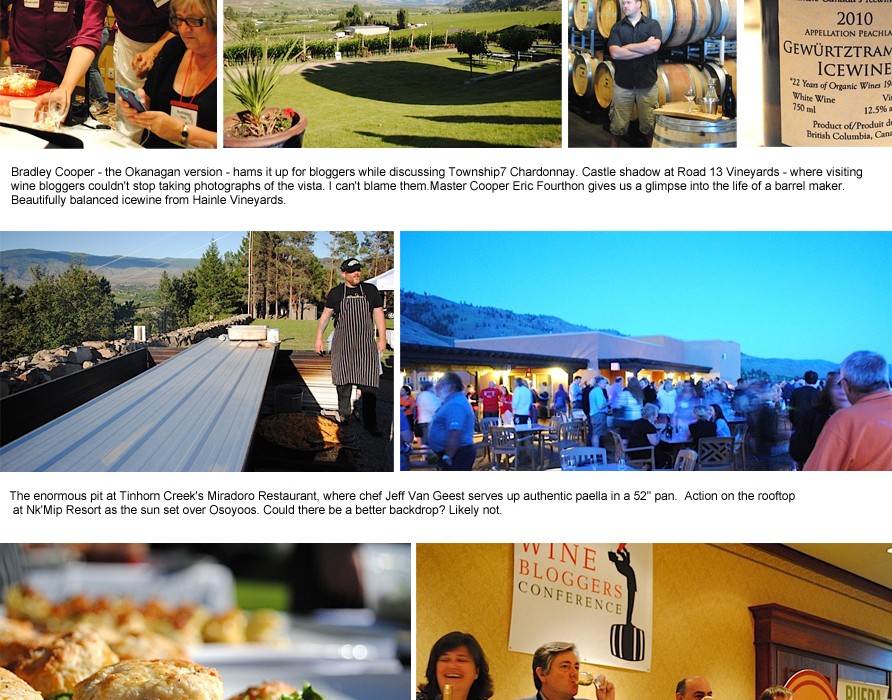 “A Report from the Wine Bloggers Conference in Penticton, BC”

Outside of British Columbia, it can be difficult to find a BC wine. A combination of low regional production, challenging provincial regulations, and an appetite for homegrown product means that most stays within our borders. According to Statistics Canada, Canadians drank more than 200,000 litres of domestic wines in 2012, at a value of $1.99 million – numbers that are growing each year.

How to achieve exposure then for our blooming wine industry outside of BC? Enter the 2013 North American Wine Bloggers’ Conference. For the first time in its history, the sixth annual conference (or “WBC”) was held outside of the US. More than 240 wine bloggers and industry professionals descended on Penticton from June 5 to 8. The goal: highlight a lesser-known wine region and educate participants on the area while providing workshops and seminars related to blogging, writing and wine. Previous conference locations included Walla Walla, WA and Portland, OR. The majority of attendees are from the US, with a smattering from Canada and beyond. Registration fees for three days of content cost “citizen” bloggers (non-industry) a mere $95 USD. At WBC, the key word is sponsorship.

Let’s take one day as an example: Friday included a keynote speaker (sponsored), followed by lunch with Wine Country Ontario, afternoon excursions into surrounding wine country (sponsored by the region), and ended with an evening reception hosted by the Oliver Osoyoos Winery Association.

Sponsors are the engines that motor this conference train through three days (which can extend to five or more, including pre-conference excursions). It’s a pay-to-play formula, with packages fetching a pretty penny on top of the expense of hosting events. Smaller wineries benefit from membership with their local area associations as participation in WBC can be cost-prohibitive to low-volume producers. Yet these sponsorship packages help keep costs down for bloggers and increase registration, so there is a method to the math.

Why invite bloggers to a wine region like British Columbia when it’s unlikely they’ll find a BC wine upon their return home? The simple answer: it’s in their nature to seek, discover, and share – and for most bloggers, without financial reward. In the months following a conference, the internet is replete with first-hand experiences from the host region. In the months post-conference, past locales have reported an increase in tourism dollars valued at more than $1 million.

Below is my firsthand experience from this year’s conference – not only what happens, but who the attendees are. After all, it’s not just anybody who can forego a good night’s sleep in lieu of back-to-back days of seminars, tastings and after parties – all in the name of sharing stories with a wine-hungry audience… for free.

Many of my blogging colleagues experienced the pre-conference excursions to Lake Chelan, WA or Kelowna, but I chose to go straight to the opening reception with Great Estates of the Okanagan. A convoy of busses arrived at See Ya Later Ranch, where staff greeted bloggers with a glass of sparkling wine and a welcome smile. Seven wine paired food stations guided people around the elevated landscape; as dusk fell, the Okanagan scenery provoked an anticipated chorus of ‘ooh’ and ‘ahh’. Any reluctant travelers were won over.

FUN: Dana of Joy Road spread out checkered blankets on the lawn in front of a Parisian-inspired accordion player. The lady’s got style.

Blogger du jour: Liam Carrier, Icon Wines. Liam lives in the Vancouver area and works with computers by day; at night, he reviews wines for thirsty readers, with a leaning toward wines produced in British Columbia. Liam is fast becoming a trusted resource for many wine drinkers. He began blogging on Icon Wines in May 2009, and his blog is not “monetized”( blogger speak meaning Liam doesn’t make any money from it – yet).

New bloggers might find a typical WBC schedule daunting: we’re in or on from 9:00am through to 11:00pm, and beyond. Some come for the wine, others for the content, but everyone finds something to engage them. This year, Friday was the official conference opening and featured a keynote speech by novelist and wine writer James Conaway. An eloquent writer, James wove a beautiful tapestry of prose until we were all spellbound. I bought a book, and got it signed.

A first for me, I participated in a panel discussion on Creating Compelling Content with the knowledgeable Michael Wangbickler and intrepid travel/food/wine writer Marcy Gordon. I was a Canadian between two Americans – and yes, I eventually found a chance to offer an apology for which there was no need. How Canadian.

One keynote speech, a wine-paired lunch, a panel discussion, wine tastings, several excursions, and an evening reception later, the day was officially done. Unofficial after-parties began around 11pm – where I fell head-over-heels for a Tannat from Uruguay.

FUN: Sipping bubbly in an elevator, and repurposing a large recycling bin as an ice bucket.

Blogger du jour: Alina Ferguson, One Girl One Glass One World. Alina lives in Washington state and launched her blog in October 2010. By day, Alina works at a communications company; by night, she writes about wine in a clear, no-nonsense way. And she likes cars. Alina has not monetized her blog.

At 7:30am, a group of bleary-eyed bloggers staggered to the park for breakfast – followed by a rare (and brief) free period to explore the Penticton Saturday markets. Fortified by coffee, juice, and breakfast, we walked back to the hotel for a day of workshops and tastings.

No boring seminars here: I joined a 2.5 hour discussion on How To Be a Wine Judge with Sandra Oldfield (winemaker and CEO of Tinhorn Creek), Harry Hertscheg (Executive Director, Vancouver International Wine Festival), John Clerides (owner, Marquis Wine Cellars), and Eric von Krosigk (Winemaker & Viticulturist, Summerhill Pyramid Winery). We swirled, sniffed, and tasted with four of the most experienced palates in the province. Had our wineries been permitted to take orders for wine on site, they would have done brisk business.

More wine-type sessions followed before the weekend reached its crescendo with the Wine Blog Awards and a grand finale dinner – all sponsored.

FOOD: Bacon jam and eggs on a buttermilk biscuit by Brodo.

FUN: Beer on the patio in the sun (a non-sanctioned event, but refreshing), and 240 people singing Happy Birthday to Sandra and me (that’s another story).

Blogger du jour: Lesley Trites, Girl On Wine. Lesley lives in Montreal. She’s a freelance writer with a published book of poetry to her credit – by day, Leslie does a fair amount of technical writing; by night, she’s a contributor to Palate Press and reviews wines on her blog – which is not monetized.

The 2014 Wine Bloggers’ Conference is headed to Santa Barbara, California from July 11 – 14 at the Santa Ynez Valley Marriott in Buellton, a town with a population of around 5,000. There’s a good chance Canadian bloggers won’t have access to many of the wines we’ll taste, but I suspect I’ll ferry some BC wine to my American blogger friends and will return with more bottles than allowed duty-free (which is two). Ultimately, that’s okay. For me, WBC isn’t about sponsorships or selling wine – it’s about meeting the people sharing the stories, and taking a few of those stories away with me.

Registration is now open for the 2014 Wine Bloggers’ Conference.

November | December issue on the stands. Read ...
Read More
For the ninth year in a row Rancho Vignola is setting up its Vancouver Island Harvest Sale here at the Mary Winspear Center in Sidney. Many of ...
Read More
Season’s Greetings EAT readers! We at EAT are looking forward to all the wonderful seasonal baking on offer around the city. One of the great joys ...
Read More
Masterclass Candied Citrus Holiday ...
Read More
In these volatile days of spring, when we’re deep into April showers in lieu of May flowers, I’m searching for a bridge beer. One with a little ...
Read More