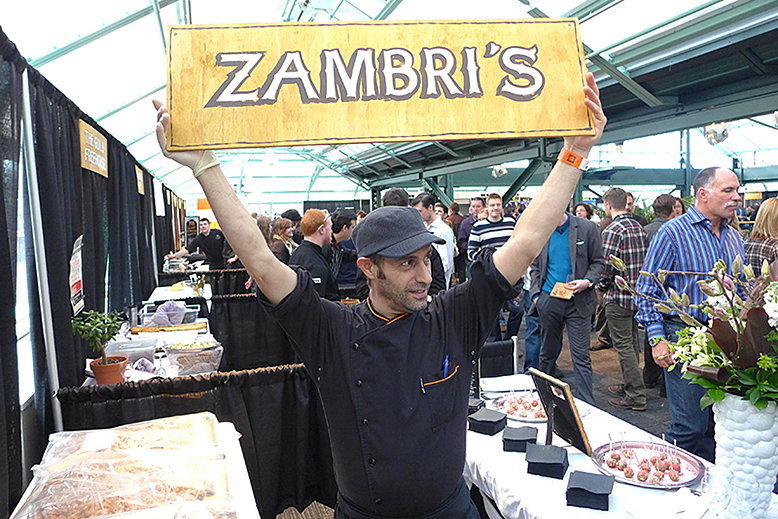 Last night Crystal Garden rocked with a capacity crowd sipping and sampling their way through the food and drink offerings of fifty of Victoria and Vancouver Island’s top eateries, caterers, pubs, coffee roasters, breweries and wineries.  If you wanted a big slice of what’s happening now – this was it.

Guests arrived for two seatings – an early and a later seating – and had several hours to wander the two floors, talking to owners and chefs and tasting dishes from the area’s best.

Chef Peter Zambri of Zambris was there dishing out Chocolate & Hazelnut Cake Coated with White Chocolate, Hazelnut & Strawberry Dust. Discovery Coffee had some their famous donuts (the Earl Grey Custard was awesome). Hudson’s on First served up delicate Halibut Gravadlax that was topped with lemon peel puree, Vancouver Island wasabi, pine nuts and dill oil – delicious and nicely complex for a small bite. And in the beer department Hoyne Brewing Company had their new Off The Grid red lager on tap to quell the thirst urge

I also enjoyed the creatively presented Beef Brisket Meat Pie on a stick from Food For Thought Catering and PIG’s Pastrami Pogo – also on a stick. For something a little different Simon Manvell from Gordon Food Service had bites of fresh sturgeon (from Northern Divine) with parsnip, basil and hot crispy genoa salami. There were many more wonderful bites but by now my stomach had reached capacity.

Started in 2009 by Scott Gurney and Amy Pecorelli Culinaire has proven to be one of Victoria’s best and most popular food festivals. Enjoy the pics below (click to enlarge) and I hope to see you next year. Just make sure you get your tickets early as this event sells out quickly.

Beer brewers from across the island and the lower mainland gathered in the lofty wooden halls of Canoe Brewpub over November 9 and 10 for the eighth ...
Read More
Victoria’s food community came together this week at Boom + Batten restaurant for Eat the Future, a tasty event to raise money for future chefs ...
Read More
It's such a festive and fun way to celebrate craft beer and our ...
Read More
It was an unforgettable afternoon. Mary Ploegsma served us David’s Tea’s vanilla chai with sweet local strawberries and chocolate biscuits. The ...
Read More
On August 20, 2019, Ocean Wise and Eagle Wing Whale and Wildlife Watching Tours teamed up to present the first in a series of speaker events in ...
Read More
Saanich Brewery Category 12’s ‘Brewmaster’s Dinner’ Marries Wildcraft With Craft-Beer It was somewhere at the beginning of the ...
Read More

The weather prognosticators are warning that we can expect a long cold winter. This brings to mind a foreboding image of barren fields, ice streaked ...
Read More