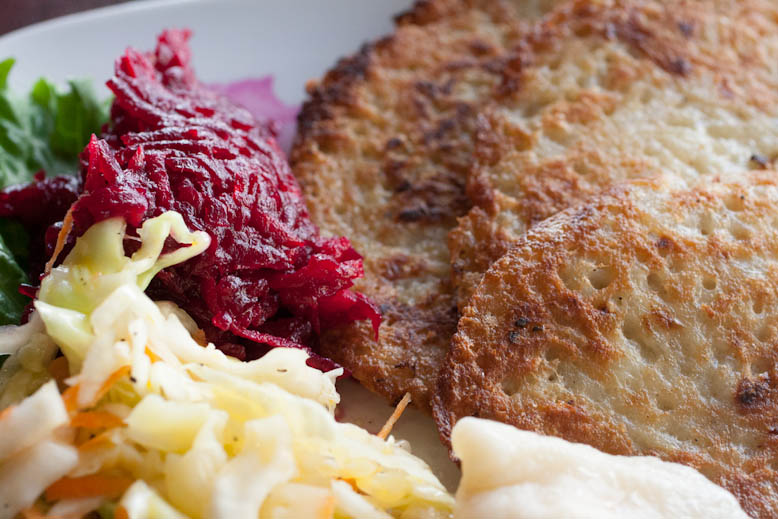 In the city with the second highest number of restaurants per capita in North America, it’s the most tiresome question you can ask. Where the hell should we eat? My first impulse is always to whip out my phone and check the holy triumvirate of Yelp, Urbanspoon, and Tripadvisor.  According to Google data gathered by Searchinfluence.com, these three review companies are the most popular and “impactful” on the web.

When you Google the name of a particular spot for example, these are most likely to appear, sometimes even above the restaurant’s own website. With the decline of print media over the past decade and the rise of the web and smartphone apps, review sites like these have largely taken over from the traditional restaurant critic model — so you can imagine just how much potential influence these sites have over the success of a business. What always makes me curious is that the restaurants with the best customer reviews don’t always sync up with what’s getting the most press, and in fact, many of the most highly reviewed spots are not the kind of upper-class, scotch-after-dinner places I’d have expected to be on top. It begs the question, what exactly drives customers to leave good reviews? 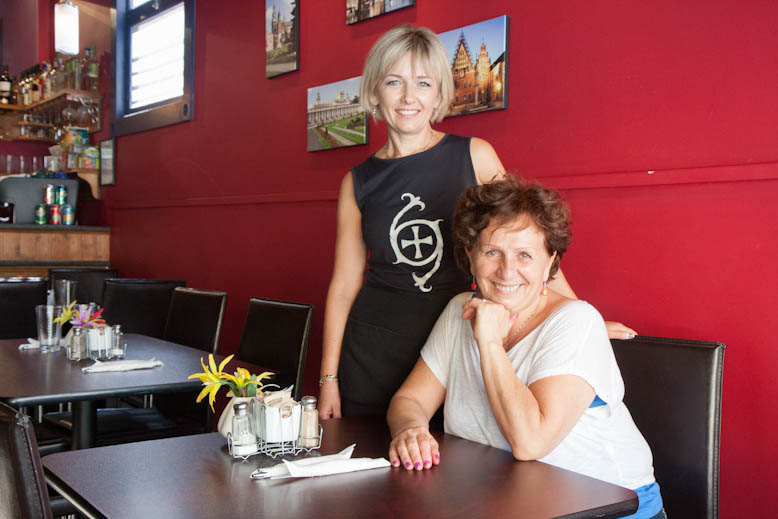 To find out, I checked in with the owners of three of Victoria’s best-reviewed spots, starting with Katherina Koper of Skinnytato Polish Restaurant. Skinnytato was once featured on the Food Network show You Gotta Eat Here, and they currently hold a 92% approval rating on Urbanspoon, 4.5 star rating on Yelp, and are ranked #12 in the city on Tripadvisor, above both Café Brio and Veneto. Katherina and her small kitchen staff make authentic Polish food with a healthy twist, including vegetarian, vegan and gluten-free options, and the reviews are effusive, with many referring to the family-dinner vibe and the great banter and recommendations from Katherina herself.

“We’re fun,” she says. “I joke, when people ask what kind of cooking school did you go, I say, well I’m born in a kitchen!” Katherina’s home-cooked perogies and slaws were delicious, and her potato pancakes brought me back to the latkes served at our family’s yearly Hanukkah celebration. When I dropped by on a weekday afternoon, a family of six Seattleites took up more than half the tiny dining room. The small size of the place magnifies Katherina’s personality, and she appreciates the fact that the tightly-packed tables are often conducive to overhearing conversations and spontaneous friendships. “

It’s cute, don’t you think?!” she said. “People come in here and they become friends!” I certainly couldn’t help overhearing the Seattleites discuss having used Tripadvisor to find Skinnytato, and I got a front-row seat to watch Katherina charm and entertain her customers. She has wanted to own a restaurant for 24 years and followed many career paths on the way, none of which involved food service. But from our conversation and her manner in the front-of-house, it was clear that her enthusiasm is the driving force behind Skinnytato. “What makes you successful is your passion,” she told me. “Everyone has passion for something. Passion brings you money, brings you fame, and it’s your fate. Fate is passion.” 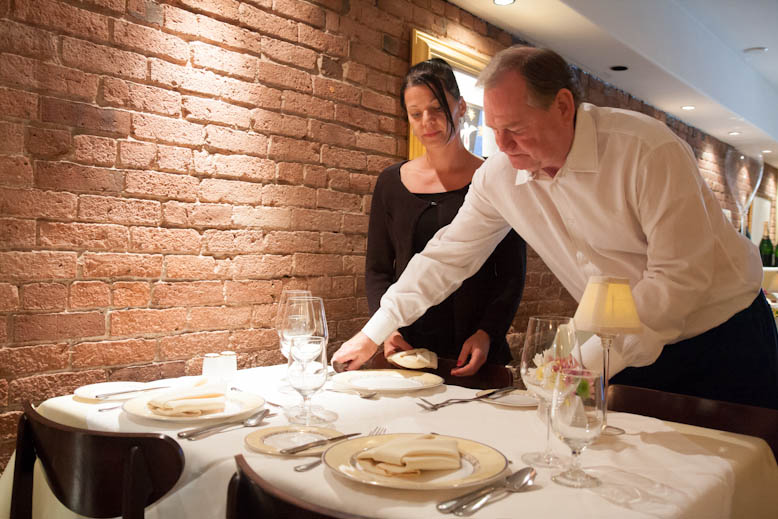 My next stop was Tripadvisor’s number one spot in Victoria, Restaurant Matisse. This classic French establishment has been a Victoria staple for fifteen years, and holds a 4.5 star rating on Yelp and an 82% approval rating on Urbanspoon. Now this was the kind of spot I expected to have great reviews. French cuisine has that je ne sais quoi cachet and a reputation for class, the kind of thing that features prominently in old-school magazine and newspaper reviews. But owner and maître-d John Phillips is no stranger to the power of the internet. Matisse might have four Exxon-Mobil stars, but if you ask John, it’s being ranked number one on Tripadvisor that really brings people in.

“The traveler, 90% of the time the first time they open their mouth they say I saw you on Tripadvisor, you’re number one, that’s why we’re here.” It also helps that Matisse’s target audience is right in line with that of the slightly-older skewing Tripadvisor. To be honest, I have yet to try Matisse’s cuisine, though there’s certainly been plenty of coverage extolling its virtues over the years (including back issues of EAT), and I have no doubt it’s sublime.

“Service is paramount next to the chef,” said John. “Without his absolute paramount idea of cooking, we’d be a bookstore.” I believe him, but what struck me as John and I talked was just how seriously he takes table service. From pulling out people’s chairs, to running up the street to buy romaine lettuce for a spur-of-the-moment Caesar salad, John’s goal is to make your experience utterly seamless and graceful.

“If you have a question, the answer is yes,” he said. “Doesn’t matter what it is.” John speaks to every guest in the room personally, and many of Matisse’s regulars are prominent Victorians who trust John and his staff with their privacy and continued patronage. The staff also let people take their time, with meals often lasting three hours and the dining room hosting only one seating per evening. The small size of the dining room creates some challenges in terms of booking, but it also allows John to keep an eye on every table in the room and ensure that water glasses are full, empty plates cleared promptly, and even watching body language so he knows when to step in if it seems like someone isn’t enjoying something. The same server stays with your table throughout the evening, and the staff would all rather carry glasses two at a time then use a tray. 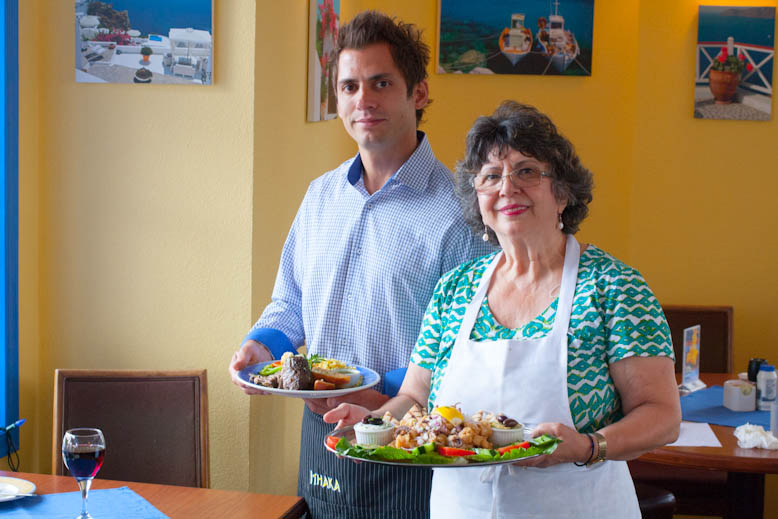 Last but not least, I wanted to check out Ithaka Greek Restaurant, which has been battling with Matisse for the number one spot for the last year and half since it opened. Currently ranked #2 on Tripadvisor, with an Urbanspoon rating of 91% and 4.5 stars on Yelp, the dichotomy between Matisse and Ithaka really summed up how strange the world of online reviews can be.

On one hand, there’s an upscale French restaurant, and on the other, a truly unpretentious Greek family restaurant, both in contention for number one. Andreas Adamopoulos and his mother Maria met me at Ithaka and despite my protestations, promptly prepared a huge amount of food, including their flaming saganaki cheese, roasted lamb and a kalamari appetizer platter. Thankfully they were technically closed and so Andreas sat down across from me to help.

Ithaka is the second restaurant that the family has owned, and it’s truly a family establishment with Maria running the kitchen, Andreas assisting her and his brother Dimitri in the front of house. Greek food has always been a periodic pleasure in my family, and it had been a long time since I tasted lemon potatoes and fall-off-the-bone kleftiko. As I dug in, Andreas told me all about the homemade bread, the special salads and soups, and threw in plenty of stories of growing up Greek. 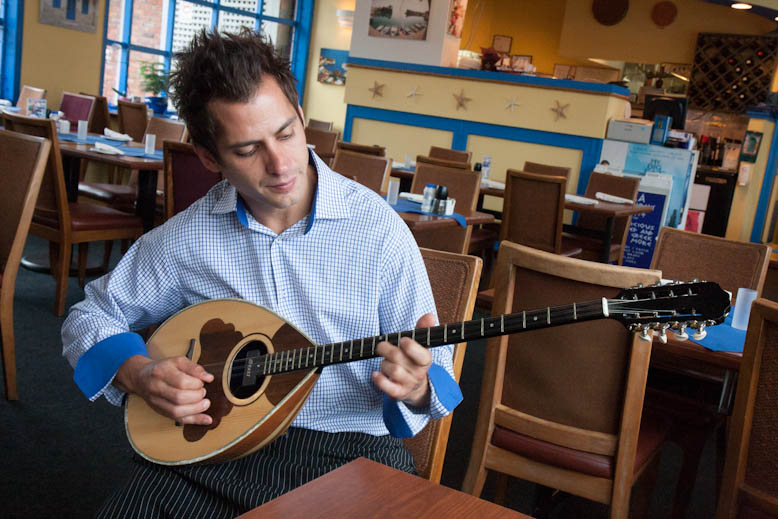 Again I was struck by how personable and engaged Andreas was as he spoke about his family’s restaurant. He was genuinely interested in connecting with me, and was happy to speak at length on any topic. “If you come to my family’s restaurant and don’t feel welcomed then we’ve failed,” he said. “We like to treat each and every guest as if they’re a VIP.”

Ithaka’s review pages are full of Andreas’ replies to happy customers who consistently mention the family members by name, and it’s clear that he takes the reviews quite seriously. “Absolutely, they’re very important,” he said. “Word of mouth is always a good thing.” He sealed the deal by pulling out his Bouzouki and noodling for a few minutes. It was easy to see how people feel so at ease after getting the full Adamopoulos family experience.

After visiting these three spots I came to a few realizations. For one, each of them had fewer than twenty tables indoors. All three of the owners mentioned that the small size of their restaurant helped them interact and feel closer with their customers, and it’s easy to imagine how a bigger location would be tougher to manage given the additional staff needed.

Secondly, all three spots had a commitment to service that went beyond the norm for what I expect at a typical North American restaurant. Whether it was Katherina’s adorable jokes and motherly touch, John’s near-fanatical commitment to waitstaff manners, or Andreas’ easy-going and engaging banter, it was almost hard to imagine any of them doing poorly even without the benefit of great food. Even given this tiny sample size, it’s my hypothesis that customers are far more likely to leave positive reviews for businesses in which they get to have a relationship with the owners.

Once you see the human being behind a restaurant, it’s hard to imagine disappointing them with a poor review, and more importantly, customers feel a strong positivity towards them that drives them to take that extra step and review the place online. In my other job as a marketing consultant, I often encourage businesses to put their staff out there as characters and help people identify with the people who make up a company, and the restaurant industry should be no different.

One final note of (hopefully) wisdom:

Take these reviews with a grain of salt. These findings mean that a larger restaurant where the owner can’t be present is likely to suffer from a disproportionate amount of negative reviews, whereas a well-reviewed smaller spot might be earning some brownie points based more on the personality of the owner than the quality of the eats. At the end of the day, online reviews are a good way to screen out places with a majority of negative press, but there’s no substitute for heading in yourself and giving it a shot. With the amount of new restaurants opening in Victoria every year, there’s plenty of opportunity — and who knows, your review might just be the one that makes or breaks your favourite business.