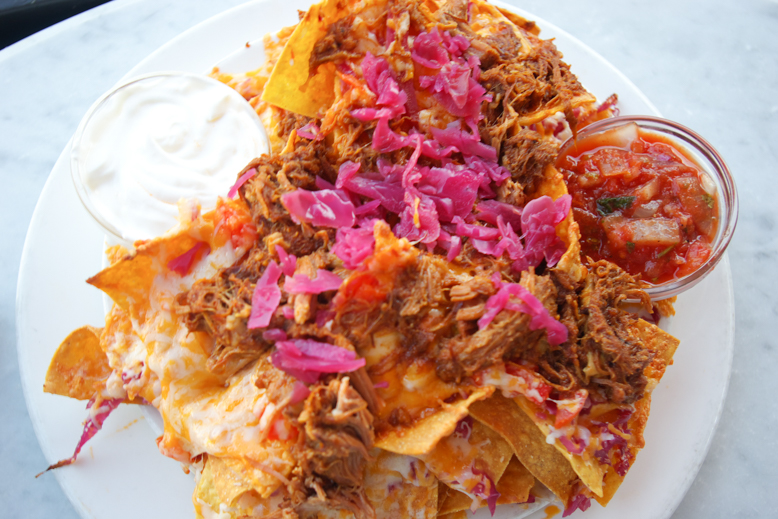 Ahhh nachos; tortilla chips covered with melted cheese. Complemented by side dips of salsa, sour cream, and guacamole, nachos are the supreme snack for sharing. We love them for lunch, for a late afternoon nibble, during Sunday football, or loaded to the brim for dinner. And how great is a plate of nachos after a night of debauchery?

The history of how nachos came to be is an interesting bit of trivia. As the story goes, nachos made their entry into the world late one day in 1943. Just across the boarder from Eagle Pass, Texas in the city of Piedras Negras, Mexico, several U.S. army wives were on a shopping trip when they stopped into the Victory Club restaurant. As the restaurant was closed for the day and all the cooks had gone home, maitre`d Ignacio “Nacho” Anaya did not want to disappoint his guests, so he went into the kitchen and ingeniously created a little snack of fried tortillas cut up into triangles, quickly fried, and covered with cheese and a few jalapenos. The ladies loved their little snack and asked what it was called — Ignacio named them “Nachos Especiales.” As word of the dish traveled and grew in popularity, it eventually became known as “special nachos.”

Watch this Youtube video on the origin of nachos

Did you know that November 6th, 2014 is National Nachos Day? Yep. Consider it a day to drop the diet and celebrate one of the greatest snacks ever to be invented. So go ahead, in honor of Ignacio (Nacho) Anaya, make a heaping plate of nachos and don’t skimp on the cheese!

Where to get great nachos in Victoria on this day, you ask? Check out the following restaurants for my suggestions. Each recipe has its own unique flair, is decently priced, and they all know how to load ‘em up just right. 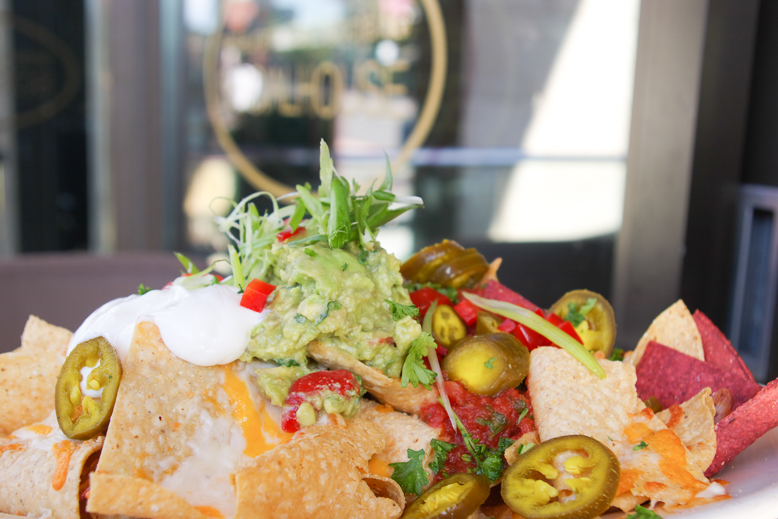 Who needs too-tiny ramekin’s to get your fingers stuck in, or to be met with your nacho sharing partners knuckles vying for the same dipping space when you can just dive in to your nachos, fully loaded at Browns. Topped with thinly sliced scallions, sour cream, house made Mexican style salsa and excellent guacamole, these nachos are a standout. The half order is plenty for two or three people as a snack. 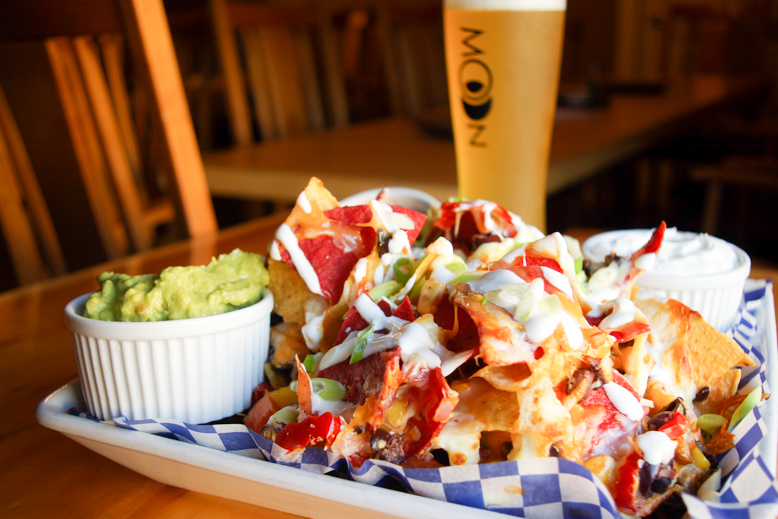 These nachos go all the way. They are what we can confidently call “loaded, super-nachos.” Aptly named Full Moon Nachos, these babies come topped with pickled banana peppers, tomatoes, spiced black beans, corn, kalamata olives, green onions, sweet chili drizzle, and a ½ pound of cheddar and mozza. It’s somewhat of a “diner’s risk” ordering this monstrosity and is a damn fine challenge amongst friends. Recommended beer: the Potts Pils, Moon Under Water’s silver medal winning pilsner.

Traditional West Coast flare is Spinnakers trademark stamp when it comes to their food, and they carry that forward even when it comes to their nachos. Topped with ale braised pulled pork, in-house malt vinegar pickled cabbage, cheddar and monterey cheese, they’re packed. In keeping with Spinnakers local and sustainable food values, you won’t find red tomatoes on these nachos if they’re not in season. As well, the house made salsa shifts during the colder months to a zesty green salsa made with late harvest winter tomatoes. 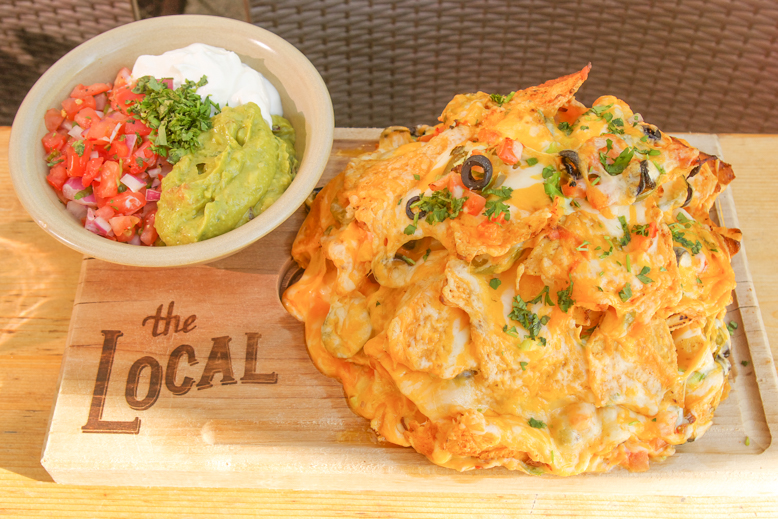 These Big Daddy Nachos are as good looking as they are loaded and filled to the top with goodness. Layered with jalapeno peppers, green onions, tomatoes, olives, cheddar and jack cheeses, they’re served with fresh cut house made salsa, guacamole and sour cream. $17.00. Add chipotle lime chicken or pulled pork for $3.00. Head down to the Local on a Sunday and enjoy your nachos for only $12 with pints of Bud for $6.00. 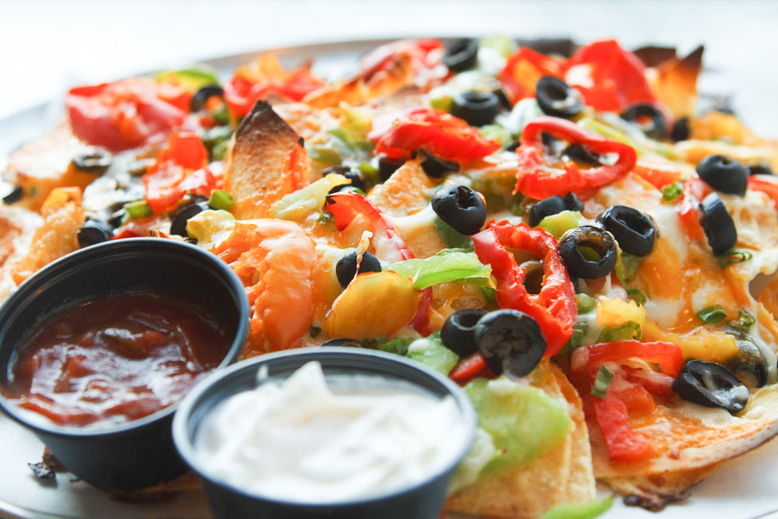 And how about the late-night pit stop, where our ooey gooey cheesey cravings can be fulfilled? The Joint has just the goods. More than just good pizza, their nachos are a steal for the price and a hefty portion to boot. Better yet, they are open until 3:00am Thursday to Saturday, and who doesn’t love a heaping helping of chips and cheese at 2:00 am?

These nachos are fierce and daringly flavored. They offer two choices: the Pesto Nachos, which come layered with a homemade pesto (no pine nuts), red onions, black olives, feta and cheddar cheese (this one is for the serious nacho eater; ask for extra napkins!). The other option is the classic Santiago’s Nachos, which come with tomatoes, bell peppers, bacon (yes bacon!), artichoke hearts, and green and red onions. Both are exceptional in size.

Eleven wines have been chosen for the 2012 Lieutenant Governor’s Awards for Excellence in British Columbia Wines, the Honourable Steven Point, ...
Read More