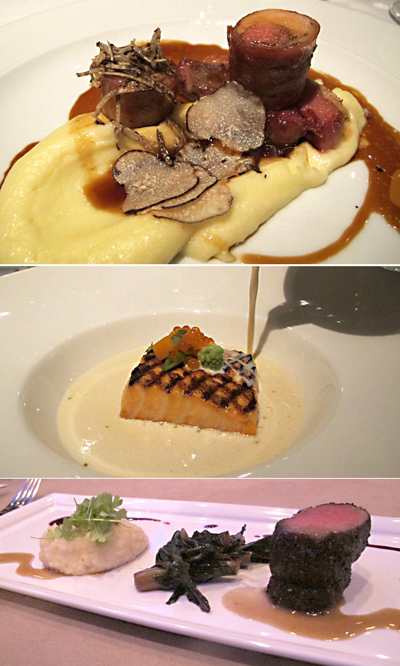 Earlier this month, the 16th annual Cornucopia Food and Wine Festival took place in Whistler. More than just a chance to party hard and long, Cornucopia is a collection of food and wine enthusiasts from around B.C. and the rest of the Pacific Northwest region, as well as wineries, producers and chefs from further afield. For me, it was a weekend of eating—and some drinking—my way through a series of dinners and tastings that reminded me that Whistler is about more than just the after-party.

Araxi’s Big Guns winery dinner was one of the highlights this year. Executive chef James Walt paired an incredible, locally-sourced menu with iconic and rare wines from around the world, like the house hot smoked salmon with salmon caviar, fennel pollen, lemon thyme and Root Down Farm veggies, all nestled in a wild shellfish bisque that gave off fabulous lobster and prawn notes. Paired with the Gaja “Gaia & Rey” 2009 Chardonnay from Langhe, Italy, it was one of the best courses of the night.

Another course of roasted saddle of rabbit wrapped in housemade bacon and seated over lightly whipped potatoes was made even better by the liberal amounts of shaved white and black Alba truffle sprinkled over the dish. It was paired with a fantastic Burgundy, the Louis Jadot “Corton-Pougets” 1999 Grand Cru.

Alba truffles made another appearance at Quattro Restaurant, where the white Alba floated freely onto plates from the many shavings made during the meal. Fresh from Piedmont, there is nothing quite as sublime as some thick shavings over a poached egg. Simplicity can be mesmerizing.

Next year’s festival will be a record 10 days in length, so gird your loins—and appetites—and make sure to go hungry.

The article on L’Apéro in the May|June issue should have stated Chef Andrea Maiolo staged at The Courtney Room and Zambri’s and that he held the ...
Read More
May|June issue on the stands. Read ...
Read More
In the last decade or so, coconut products have risen to star status. Coconut water is trending up a storm these days; rich in vitamins and ...
Read More