It’s Saturday afternoon, and Sarge Tiwana has the Chelsea vs Bayern Munich Champions League Final turned up on the shop television, which is sitting above a deli case stocked with takeaway Indian food. Nearby, his young son, daughter and a friend sit on stools, gazes fixed on the screen. Somebody’s Springer spaniel is lying in the doorway, basking in the spring sunshine. Tiwana has one eye on the telly as well, as he rings up sales and swaps football banter with the regular customers who trickle in and out of the heritage corner store.

The Willows Park Grocery is an Oak Bay institution. Situated on the corner of Eastdowne and Dalhousie Streets, neighbourhood residents have done their shopping there for the past century––the store celebrates its 101st anniversary this year. Tiwana, who owned a shop in Lapworth, England for 17 years, took over proprietorship of store late last year. The little shop has gone through some changes since then, among them a new British Import food section that is growing by the month, and a mouth-watering line of freshly made Indian cuisine takeout. 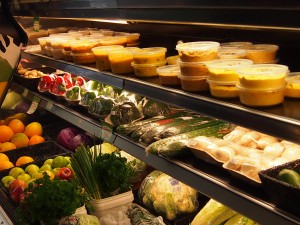 “All our spices are ground in house. Nothing from a bag, nothing from a jar,” says Tiwana, gesturing towards the store’s rear kitchen where a broad assortment of curries, soups, and kebabs are made weekly by Indian chef Rekha Molleken. Her offerings change every few days, according to available ingredients, and are posted on the shop’s website. Highlights from the past week included Grilled and Spiced Aubergine, Pakoras, Paneer Saag, Butter Chicken, and Brown Rice with Lentils. Rekha’s fresh heat & serve curries are sold in a deli case (she also pre-cooks rice to go), while a freezer near the back of the store is stuffed to the brim with frozen soups, curries, and meat. Willows Park Grocery also carries a small but well-rounded selection of fresh produce and dairy items, dry goods and household items, as well as organic drip coffee and made-to-order coffee beverages.

Sarge Tiwana’s pride in his business is palpable, as he leads me from one area of the shop to the next (while taking the occasional peak at the football score) while talking enthusiastically about his newest import products and his favourite items from Rekha’s kitchen. Indeed, the little shop, like the best neighbourhood corner stores, maintains a unique charm, an evolving reflection of the shopkeeper’s individuality fused with local character.

Tiwana and his family are hoping to broaden their business and draw more people from the community in to try the Indian food, and have recently launched a website, Facebook page and Twitter account (@WPGrocery) to spread the word. So far, so good. I found out the next day that Chelsea won––one more reason for Sarge to smile.