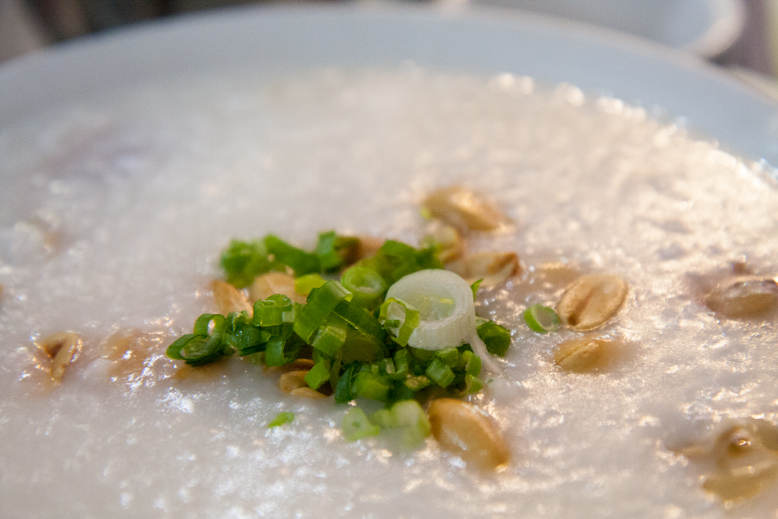 You know a food has jumped the shark when there’s an entire line of inspirational self-help books about it. Much to my family’s chagrin, this is how I feel about chicken soup, AKA, Jewish penicillin. It feels like I’m only ever in it for the matzah balls these days, and I always just feel like making a risotto with the bowl of stock instead of slurping it up.

So when flu season hits and it starts raining uninterrupted for more than eight hours at a stretch, I usually turn to Vietnamese rather than mom’s chicken soup — but a person can’t live on pho alone. I’d heard that congee was a contender to chicken soup, but despite living in Vancouver as a kid I had few Chinese friends and never tried it. In light of the weather and my explorations into Japanese donburi, it seemed like the perfect time to give it a shot.

Though often thought of as a Chinese dish, congee is actually an extremely common soup throughout Asia, likely due to its simplicity and the ubiquity of its ingredients. To make it, you simply cook rice in water until it forms a gruel or paste-like consistency, almost like a very soupy bowl of grits. Different cultures use long or short grain rice, more or less water, and a huge variety of different garnishes and toppings. Here in Victoria I have a few Chinese buddies who meet for dim sum once in a blue moon, so I hit them up on Facebook to ask them to take me out for lunch and educate me. I was hoping Ronnie could convince his mom to make us a homemade batch, and she shot us down — but not before providing a recommendation.

I asked my mom and there’s a place in Chinatown that should be good, it has the pigs hanging. She said probably the best in Victoria. We can go there Sunday and i can ask my mom for her recipe and how to make it.

That would be wah lai yuen.

Lol wow ur good! Yes, that’s the place! I didn’t say it cuz i thought u wouldn’t understand.

i may be a gwailo but i live two blocks away alright, i know some shit.

With my weak bona fides thus established, we filed into Wah Lai Yuen (560 Fisgard St., 250-381-5355) for a Sunday lunch. I was gently bullied into ordering century egg congee, Ronnie got the fish, and Xingyang got the combo. There was no listing for the contents of this combo, so we asked the roguish, sunglasses-clad man behind the pastry counter, who promptly had to yell into the kitchen to find out. “People use the leftovers from last night, just cook with rice, everything together,” said Xingyang, laughing. “That’s why they have combo at the restaurant!” 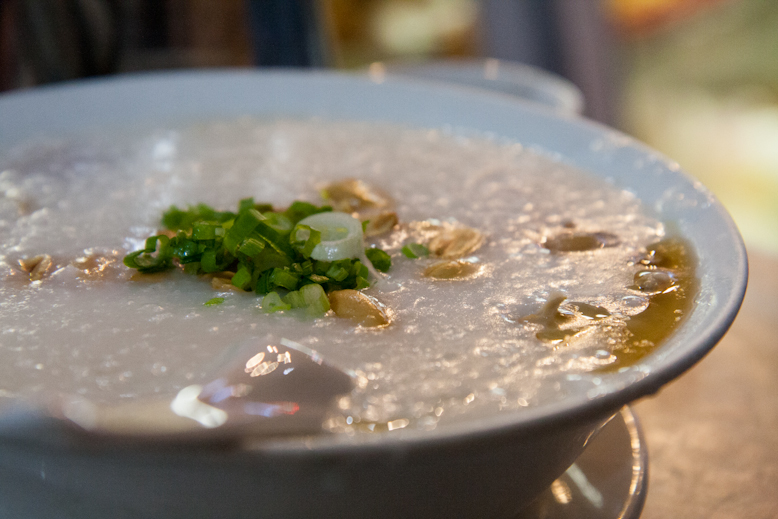 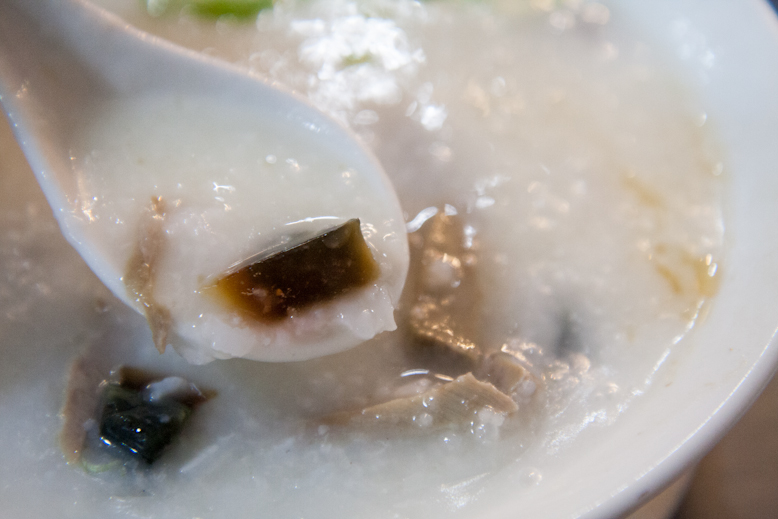 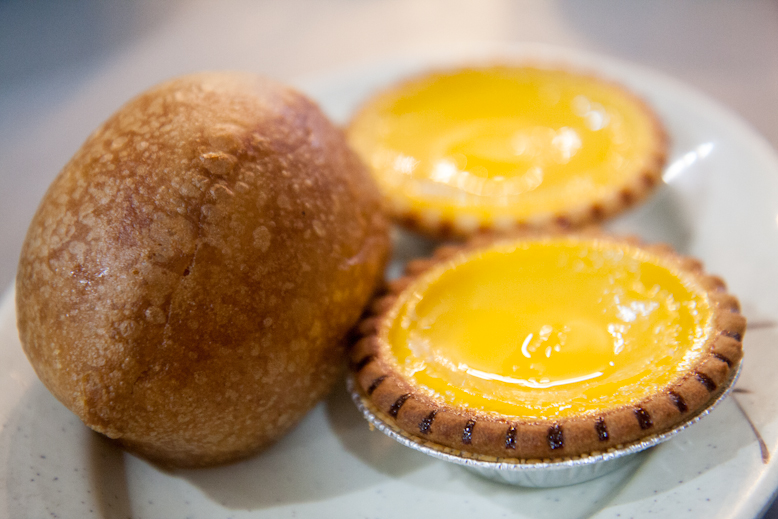 Given congee’s simplicity and inexpensive ingredients, it’s clear why it’s historically common as a famine food. Thanks to rice’s absorbent properties, it really doesn’t take much to produce a big vat. “Very little rice, very little,” Xingyang said, pinching his fingers together to indicate. “Maybe a cup of rice for three people. In a famine, if people didn’t have enough food, they’d have very little rice so they would cook a little bit for a million people. But the people who eat the congee, they would get hungry after a very short time.” “That’s why modern day they throw everything else in it, like chicken, eggs,” said Ronnie. “There are some expensive ingredients you wanna use; there’s a lot of seafood they put in. Dried scallop, Conpoy, you put it at the base and it slowly cooks and provides flavour.” 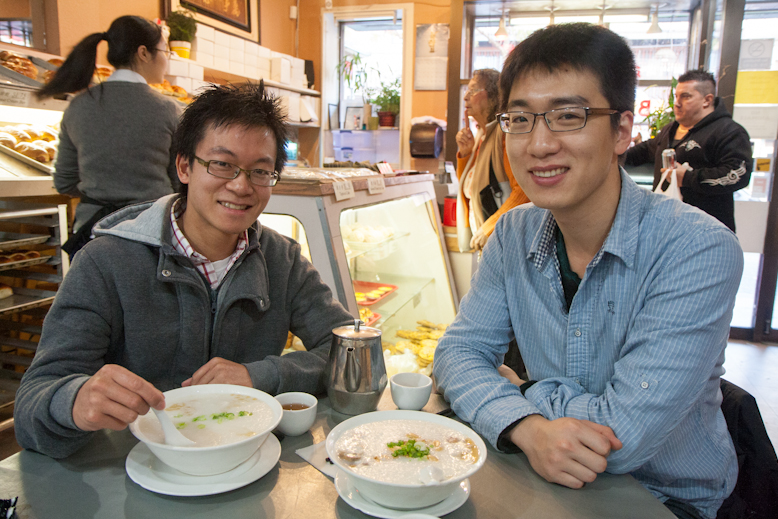 According to Ronnie, today’s congee is more common as a breakfast dish, which makes sense when you see it’s similarities to Western porridge. “When I was in Hong Kong it was really popular for breakfast there. There’d be cafes and shops that just sold congee in the morning and then a bunch of pastries.” My century egg congee was pleasantly thick and thoroughly comforting, with the chunks of complex and earthy preserved egg adding a bit of mystery. We didn’t feel particularly full though, so we rounded out our lunch with some egg tarts and my favourite guilty pleasure, hom sui gok. Deep-fry that sucker. 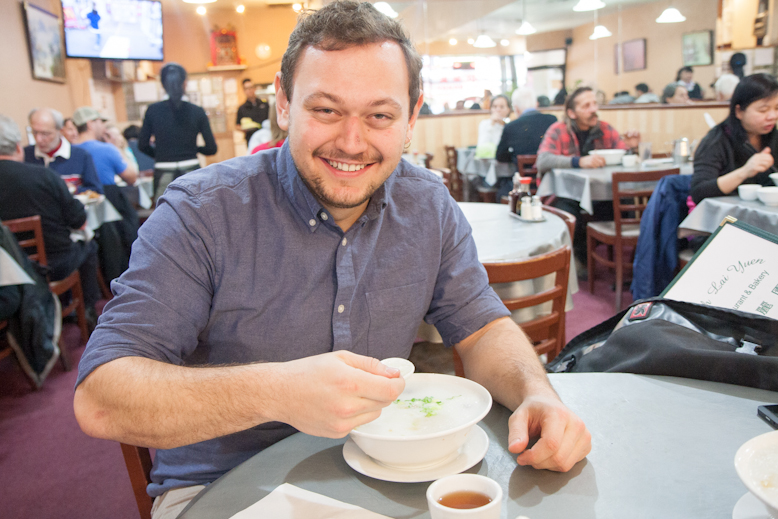 I don’t know if I would go out and order congee again, given how easy it seems to make and how tempting Jade Fountain’s dim sum is if you’re already heading out for breakfast. But the next time I come down with something, I’ll strongly consider borrowing my friend’s rice cooker and giving homemade congee a spin. Wish the pox on me, and you might just get to read about it.

July|August issue on the stands. Read ...
Read More
The federal government is rushing through sweeping changes to Canada’s environmental laws. Significant changes to the Fisheries Act are tucked ...
Read More