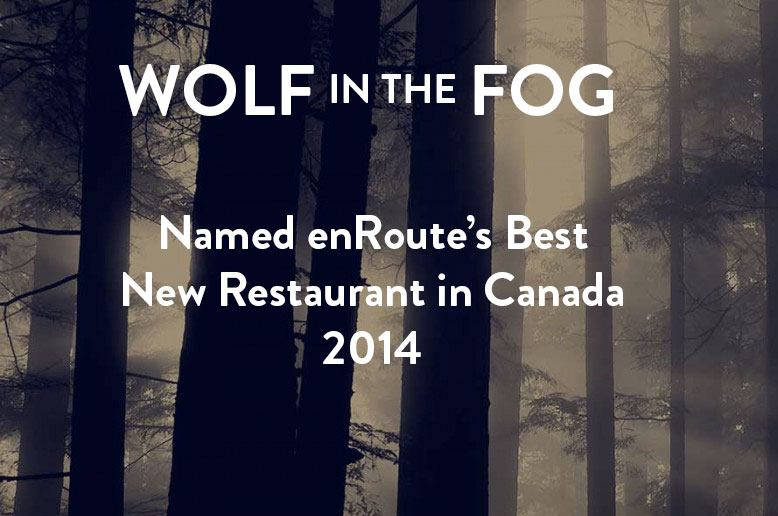 
Renowned food writer Andrew Braithwaite (who EAT profiled a little while ago here) took a month-long culinary tour across the country and poetically captured the spirit of Wolf in the Fog in his description of the winning restaurant: “After a long day of surfing on the extreme west coast of Vancouver Island, where rainforest meets ocean, you stumble up a flight of stairs and into a soaring cedar-clad room above a surf shop,” says Andrew. “You’re greeted by a prowling wolf assembled from driftwood – but not a lick of fog in the house tonight – and Etta James howling on the stereo. It’s the kind of place that stops you in your tracks.

Andrew signs off his stamp of approval with a call to encourage diners to make Tofino a destination: “You gaze up at the giant starburst built from two dozen surfboards busted by local pros. Follow that star, you feel a sudden urge to tell everyone you know, as far west as you can go. You’ll find yourself in remarkable company.”

“We’re so honoured to be named Air Canada enRoute’s 2014 Canada’s Best New Restaurant,” says Chef Nick Nutting of Wolf in the Fog. “The entire Wolf in the Fog team deserves credit for their hard work and dedication and we want to thank the community of Tofino, including our local suppliers, for their ongoing support. It’s easy to find inspiration living in such an amazing part of the country and it feels great to help put Tofino on the map as a culinary destination.”

Chef Nick Nutting and his team combine their raw passion for foraging and feasting with experience in some of Canada’s best restaurants including the award-winning Garcon Restaurant in Montreal, The Pointe Restaurant at The Wickaninnish Inn in Tofino and Catch in Calgary.

Wolf in the Fog’s fall menus take their inspiration from the fresh, local and wild ingredients found on their doorstep with dishes such as roasted fall salad featuring local wild mushrooms and truffle dressing and quinoa crusted sweetbreads with pumpkin & gorgonzola ravioli and maple perfectly summing up the season.

Tofino’s location on the wild, west coast of Vancouver Island provides plenty of fresh seafood for sharing platters at Wolf in the Fog. Dishes for the table such as Szechuan surf & turf with braised short rib, spicy grilled octopus, sweet potato, bok choy and The bombshell with saffron coconut curry, fish, ‘outlandish’ shellfish, chutney and bread are served family-style on vintage mismatched tableware.

Behind the bar Hailey Pasemko creates inventive cocktails that echo the ethos of the restaurant and make the most of Tofino’s berries, barks and natural ingredients. From a cedar-infused rye based Cedar Sour to a Magic Lure featuring homemade salal berry gin, the cocktails showcase foraged and local produce in tune with the cuisine.

Wolf in the Fog is open 11am-5pm for lunch and 5pm until midnight for dinner. The Den is open for coffee and pastries from 6am and lunch and dinner menus are also available downstairs. Please call 1-250-725-WOLF (9653) or visit their website for reservations.

About Wolf in the Fog

Capturing the true spirit of Tofino, Chef Nick Nutting’s seasonal menu reflects incredible local ingredients prepared by skillful and confident hands. Menus feature seafood and fish in abundance from Tofino suppliers, meat and grain from Vancouver Island farmers, and wild greens and mushrooms foraged from the plentiful forests and seashores of Tofino. A focus on family-style gatherings, communal dining and share plates, encourages guests to engage with their food. Bringing a wealth of international technique and talent, the team holds a candid passion for the natural environment of Tofino and the produce sourced there – from foraging for chanterelles or cooking whole salmon for friends; Tofino is where they have chosen to be.

The article on L’Apéro in the May|June issue should have stated Chef Andrea Maiolo staged at The Courtney Room and Zambri’s and that he held the ...
Read More
May|June issue on the stands. Read ...
Read More
When asked for a seasonal recipe, Bill Jones, from Deerholme Farm, sent us this recipe. Cook up a batch of biscotti before the holidays get rolling ...
Read More