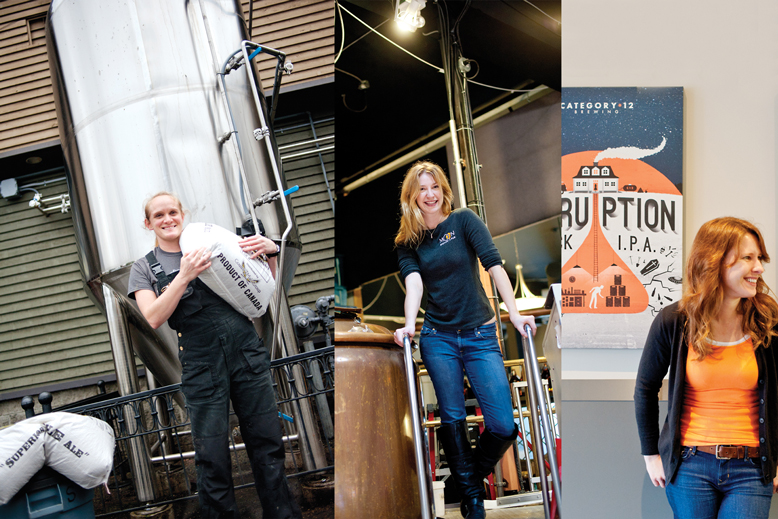 Kala Hadfield stands in front of a stainless steel tank on the brewery floor, her pink rubber boots sticky with malty wort.

Here at Spinnakers, Canada’s original brewpub, she’s literally following in her father’s footsteps, up to her blonde tresses in the art of brewing craft beer in the space architect Paul Hadfield designed and built 30 years ago.

“I always had it in the back of my head that I might like to be brewing,” says Hadfield, 31, who now shares the production responsibilities with head brewer Tommie Grant.
Her Northwest Ale is often touted as one of the brewery’s finest beers, and her Hoptoria took Spinnakers into the world of highly hopped IPAs.

While the idea of woman brewing beer may seem novel today, it was once commonplace. Long before there were industrial breweries and brewers’ guilds, women made beer, brewing for both family consumption and local commercial sales. In Medieval Europe, it was the female “alewife” or brewster who brewed the everyday ale.

Beer was a highly perishable product, produced in small batches. But the use of hops as a preservative allowed it to be produced in larger quantities and shipped over greater distances. This helped turn brewing into an industrial trade, which is when the profession became the domain of men.

But in the age of craft brewing women are taking back their place in the business. Craft breweries are small by definition, so it’s no surprise many are a family affair. Townsite Brewing in Powell River, founded by Karen Skadsheim (who left the business last year to successfully run for municipal council), is now managed by Chloe Smith, whose husband Cedric Dauchot is the brewmaster, with Michelle Zutz in charge of sales. Smith is a trained brewer herself; she and Dauchot met while working together at Montréal brewpub.

Category 12 Brewing in Saanichton is owned by Karen Kuzyk and her brewer husband Michael. Their crisp Unsanctioned Saison, with a suitcase-hauling traveler in pumps on the label, definitely speaks to women on the move. The designer’s original image featured a man, but Karen suggested switching it to a woman because “there’s something about the complexity of Belgian beers—and especially saisons—that appeals to women who may not like other styles.”

And at Victoria’s Moon Under Water, brewer Clay Potter’s latest Farmhouse IPA, Hip As Funk, has Vancouver artist Bjauna Sorensen’s edgy self-portrait on the can.

“We are releasing this new beer in a can with a powerful, strong, non-sexualized woman depicted on the label,” says Chelsea Walker, the Moon’s co-owner and sales manager.

“Women are a huge emerging demographic among beer consumers.”

Cinda’s writing appears regularly in EAT magazine. Look for an expanded version of this article in the March/April issue.