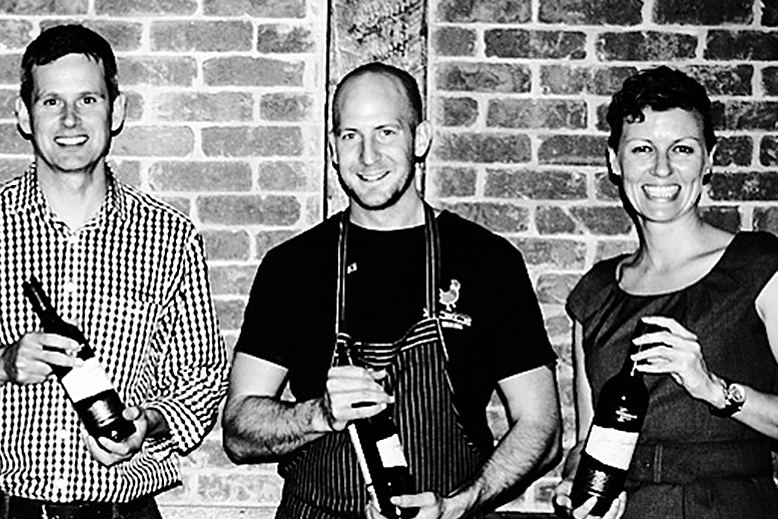 Australia’s oldest operating winery, George Wyndham founded Wyndham Estate Winery in1828 in New South Wales. The first Shiraz vines were planted in 1830, providing Wyndham Estate with the bragging rights of being the birthplace of Australian Shiraz.

Fable Kitchen was opened in the spring of 2012 by Chef Trevor Bird (of reality show Top Chef Canada fame), and has become one of Vancouver’s “it” restaurants, showcasing the best of local farm to table cuisine. Chef Bird chose to plan the entire evening with this 2010 Shiraz as the only wine, thus showcasing the wine’s excellent versatility with food pairings from appetizers to desserts.

Chief winemaker Steve Meyer introduced the 2010 Shiraz: An easy drinking wine from down under, it displays fruit flavors of plum and black cherry with hints of anise, chocolate and signature Australian notes of eucalyptus/mint.

The evening started with canapés—wonderful blue cheese and bacon filled dates along with shooters of parsnip and apple soup.  Trevor chose to highlight the herbaceous notes in the wine with the first course of rabbit legs and squash angolotti. For the second course, Braised Beef Stiletto, the Shiraz was used to braise the meat and create the au jus, making this a perfect pairing. The evening drew to a close with a sublime Dark Chocolate Terrine and Olive Oil Ice Cream.

Wyndham Estates and Fable Kitchen proved to be the perfect pairing for the Canadian launch of the George Wyndham Founder’s Reserve 2010 Shiraz .  Trevor Bird’s creativity in constructing a winemaker’s dinner using just the one wine wonderfully illustrated its versatility. At $18.99 a bottle, this easy drinking Shiraz from down under is a winner.

September|October issue on the stands. Read ...
Read More
August 22, 2022 — Staff, volunteers, and board members from Victoria’s Belfry Theatre have raided some of the best local wine cellars to find ...
Read More
A popular go-to these days, for the post workout snack or the mid-day nibble, is the energy bar. Yet the average commercial bar contains over twenty ...
Read More