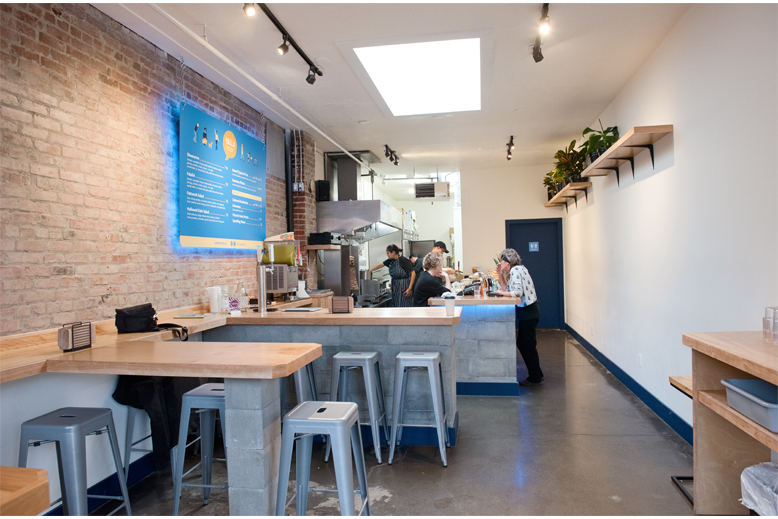 Tucked into the old Discovery Coffee location, it’s the brainchild of chef Joel Pollock and his wife Pam Smith, a pair with deep roots in the food and wine business, and experience ranging from Eden at The Rimrock Hotel in Banff to Sooke Harbour House and Stage Wine Bar. 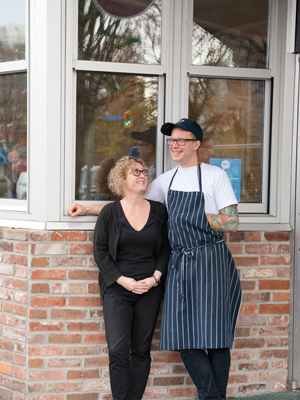 A falafel joint might seem like a huge detour for a chef with such upscale experience, but it’s a dream that’s been percolating with Pollock for years. In fact, it was his own “bangin’ falafel recipe”, perfected for friends, that inspired the pair to open Yalla.

“Joel has always wanted to have a little falafel restaurant,” says Smith who is also a trained sommelier and CPA. “I did a spread sheet, crunched the numbers, and we thought maybe it could work.”

And it’s working splendidly. Locals are lining up to take out sandwiches and salads or share a plate of creamy hummus, perched at the bar. And while the offerings are familiar, this isn’t your average shawarma shop.

Along with the traditional pita wraps, filled with slivers of grilled lamb or crisply-fried falafels, and their own pickled vegetables and sauces, you’ll find some unexpected dishes on Yalla’s compact menu. The hearty kale salad, topped with cubes of fried Haloumi cheese and sweet cherry tomatoes, has lots of fresh mint and parsley in the mix, along with some toothsome bulgur wheat. The hand-cut Kennebec fries are dusted with Hawai’j (Pollock’s lively version of a peppery spice mix from Yemen), then served with a yogurt and sour cream dip, shot with a citrusy hit of preserved lemon, to balance the heat.

Each falafel is turned out individually, using a hand-held mold, and fried fresh to order. Fluffy and filled with bright green herbs on the inside, with a nice crunchy exterior, they’re vegan and gluten free. 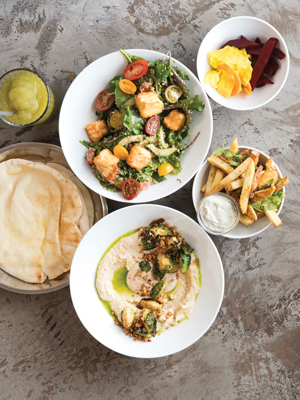 “We’re cooking 15 kg of chickpeas a day – so many chickpeas!” says Pollock of the ingredient that’s ground for both falafels and his creamy hummus, a dip that’s served with ever-changing daily toppings (from baba ghanoush to sautéed mushrooms, butternut squash or ground meat) and slathered into every sandwich wrap.

Wraps also include Pollock’s house-made sauces, pickles, and condiments – the fiery Zhoug is a chimichurri-like fresh green chili and cilantro sauce, and the golden Amba, an exotic puree of spiced mango, garlic and turmeric, add layers of exotic flavour. Everything is made from scratch – no falafel or tabouli mixes here – and meats are Halal.

The authentic recipes are inspired by a recent trip to Israel and the West Bank, where the pair explored cafes along the Mediterranean, from Jerusalem to Haifa and Tel Aviv. The regional variations in both falafel and    hummus were a revelation, says Smith, as was the refreshing Limonana, a minty lemon slushie drink served from carts on every street corner. It’s on their menu, too.

Yalla is a compact space, clean and spare, with an exposed brick wall and an open kitchen where you can watch the cooks creating your meal. There are a few high top tables in the front to eat in, but the shawarma and falafel sandwiches are wrapped perfectly for take-out, picnicking or strolling.

They’re working on a liquor license but for now have local Cultured Kombucha on tap and soft drinks from Victoria Soda Works. They hope locals will gather at Yalla to share a plate of their creamy hummus and socialize.

“It’s the Middle Eastern version of our plate of nachos,” says Smith. “This food is all about the culture of sharing.”

Yalla translates to “let’s go” in both Hebrew and Arabic – this new take-out should be your go-to for fresh Mediterranean street eats. Shalom!

July|August issue on the stands. Read ...
Read More
As a generally skeptical person, I felt ill-suited for a story on the proposed Victoria Community Food Hub. Sustainable products, food security, and ...
Read More