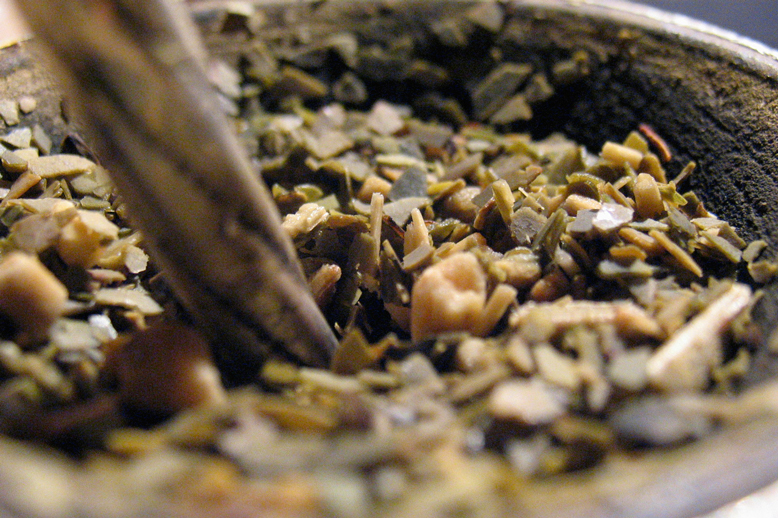 In the previous article we looked at the big picture when it comes to yerba maté. Now let’s look at one brand that is doing everything right.

Guayaki Yerba Maté is not only the best tasting yerba maté out there, they have a business model that has included ethical business practices since day one. In essence, it’s a company with two sides: the American side and the indigenous side, including Guayaki Ache people of Eastern Paraguay. It’s a business partnership that is helping restore the forest, and with it, a way of life

The story of Guayaki Yerba Maté starts with co-founder, and Chief Grove Enhancer, David Karr. A northern and central California boy, Karr studied business at California  Polytechnic State University in the early 90s. He focused on finance and international marketing, but soon got disillusioned by the adverse environmental and social affects of the typical American corporation. So he hit the pause button on his studies and traveled Europe for two years, studying French, German and Spanish.

When he got back to the US, his life changed. “I went back to finish my studies and right after grad I started a computer consulting [business] with a few friends in San Luis Obispo, to stay in the area [of Cal Poly]. Within 6 months, I met Alex [Pryor] and within a year we were in [business] together.”

Alex Pryor is an Argentinian native who had studied food science. Pryor introduced Karr to, among other things, yerba mate, other models of capitalism and even his Canadian wife.

“I was on a date with my girlfriend at a restaurant and Alex was serving. So one thing led to the next and he invited us to his place for a traditional BBQ. Actually, to be totally accurate, he spilled my dinner on me and that got us talking!” Their shared values of social and environmental responsibility as well as ethical business practice and an openness to alternative business models made them a perfect match.

Their values would also shape the nature of how Guayaki does business. Guayaki’s mission has been market-driven conservation and ethical business practices from the beginning. They were the first to offer Fair Trade pricing – long before there were Fair Trade prices for yerba maté – and have financial partnerships with indigenous farmers, utilizing traditional methods that not only protect the forest but help rejuvenate it.

Their first partnership was with the Ache Guayaki of Paraguay and they have since worked with other indigenous groups in Argentina and Brazil. This partnership helped restore the forest and an aspect of traditional life. It has also lead to getting the Ache land title from the Paraguayan government.

The Ache Guayaki are a tribe of Guaraní, the indigenous people and language in Paraguay and northern Argentina. Traditionally nomadic hunter-gatherers, the Ache have lived in the Paranaense forest in eastern Paraguay for centuries and didn’t have much contact with the outside world until the 1970s. That’s when the forest started getting cut down for industrial agriculture (mostly soybeans and corn)

Now only between 7 and 13% of the original forest remains – from 20,000 square km to just over 50 – threatening not only the ecosystem, but also the Ache’s way of life.

They have an agreement with Guayaki Yerba Mate for growing and preparing the leaves the traditional way and exporting them to their plant in the US. It has not only given them a sustainable income, but also helped rejuvenate the forest. The Ache traditionally grow maté in the shade on the forest floor. Seedlings take 12 years to reach maturity and can then be harvested for 85 years. As opposed to the single-crop plantation model, this model incorporates traditional knowledge and methods as well as encourages forest restoration due to being shade-grown. Nelson Garay, Guayaki’s agricultural expert, says, “what we are trying to do with this project is to join culture and tradition with a production model that creates energy.”

By partnering with small farmers and indigenous peoples, Guayaki helps provide a stable annual income in addition to restore the forest. They’re currently on track to restore over 200,000 acres of forest by 2023.

Here’s a video of the inaugural Ache harvest rainforest grown, certified organic/fair trade Yerba Mate for Guayaki from June of 2009 in north eastern Paraguay (in the province of Canindeyu). It shows the entire process, from seedlings to planting, harvesting, roasting, drying and finally shipping to North America (where it’s milled and packaged).

Robert McCauley, from Guayaki’s Canadian office says, “the real value in the biodynamic is the cultivation method’s impact on the immediate environment. This is grown in a farm setting where the whole rainforest has been certified by biodynamic – this is crucial as it is in an area where biodiversity is at a pivotal point and the amount of standing rainforest is only 7% of what it had been less than 70 years ago.”

The biodynamic loose leaf maté is grown from a rainforest plantation in Argentina and responsible for making a maté lover out of me.

This partnership’s success inspired the Ache to lobby Paraguay to recognize ancestral rights to forest. In July 2011, after 12 years of lobbying, 60 Ache families got title to their ancestral land, making them legal owners of the forest (which is rare for indigenous people in South America). Guayaki Yerba Maté was with them the whole way, which the Ache used as an argument for land title. Karr and Pryor from Guayaki Yerba Maté were among a group who planted 100 maté trees to celebrate, along the main avenue by the Paraguayan government buildings in Asuncion.

So what’s new at Guayaki? Besides new blends of yerba maté and new flavours of unsweetened maté beverages, Guayaki has set up yerba maté machines at select universities along the west coast.

“Our most recent developments,” says McCauley, “are installing a proprietary brewing system, developed by Curtis, to offer hot yerba mate programs at post secondary schools such as UBC, SEATTLE U, Lewis and Clarke (Portland). [L & C] is one of the first universities we introduced it at and our Hot Brew now accounts for 30% of all caffeinated beverages sold at this school.”

First of all, I have to start by attesting that although I’ve grown up in Victoria and have family in Oak Bay, The Snug Pub at the Oak Bay ...
Read More