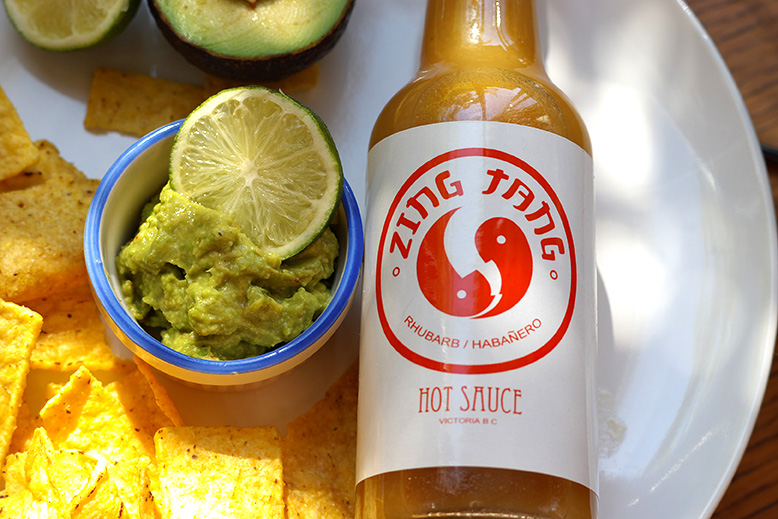 These days, hot sauce is the new ketchup. It’s the condiment that spices up dishes, has few calories, and just a dash will do. There are dozens of brands available with popular names like Sirracha, Franks Red Hot, Tabasco, and Louisiana leading the pack. The level of spiciness depends on what type of chili pepper is used—cayenne, serrano, chipotle, jalapeno, or habanero (one of the hottest according to the Scoville Scale. While spice is the predominant factor, each product varies in sweetness, spiciness, and smokiness.

Now, I’m a big fan of hot sauce, a fanatic actually. I like it on eggs. I like it on pasta. I like it on pizza, tacos, even toast. Heck, I’ll douse just about anything with hot sauce. I keep several varieties on hand and use them interchangeably in my cooking.

Naturally, I thought I had the full gamut of hot sauces covered. I’ve amassed bottles from Central America, Asia, India, and America. So imagine my surprise when I stumbled on a new, locally made hot sauce! Here it was, the one taste I had not yet encountered in my hot sauce endeavors; hot and tart—the slightly spicy, refreshing, and citrusy hot sauce aptly named Zing Tang.

And here’s the kicker, Zing Tang is made with rhubarb. Rhubarb hot sauce!

Now, why didn’t I think of that?

The spiciness is fueled by habanero chili peppers (the zing) and the tartness comes from the rhubarb (the tang). Its taste is unique and pleasant, and it just might be the world’s first rhubarb hot sauce. 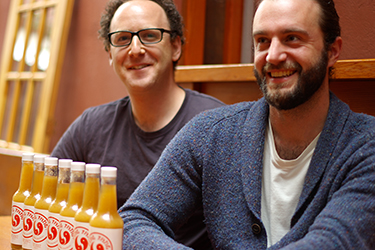 The idea for Zing Tang came about when Vizer’s mother-in-law handed him a surplus of rhubarb. “We didn’t want to make crumble and neither of us have a real sweet tooth,” says McLean. “I had this moment,” says Vizer, “of hey, I can make hot sauce with this!” “It’s an application beyond dessert,” McLean says. With over 25 years of restaurant experience combined (Vizer in the kitchen and McLean front of house) the two soon came up with a recipe, a logo, and a name.

Zing Tang is made from a blend of fresh rhubarb and fiery habanero peppers. It’s 100% natural with no additives or preservatives. The tart (locally grown) rhubarb hits the palate first—fresh and tangy, rounding off with the zingy heat of the habaneros. It’s not overly spicy by any means, just a nice heat that comes in at the end and mellows quickly.

Each 80-liter batch produces 200-220 bottles and uses a whopping 65 pounds of rhubarb. As for the rhubarb, “we wash it, chop it, and then it’s the last one in the pot after cooking has begun. No peeling or skinning” says McLean. The result is slightly fibrous, unfiltered and all-natural sauce. It also contains zero salt. Whereas most hot sauces are loaded with sodium, Zing Tang doesn’t seem to be lacking without it.

Try a sample of Zing Tang at:
The Breakwater Café and Bistro
Next month the menu will feature a Zing Tang marinated chicken burger with Zing Tang house-made coleslaw.

Superflux Cabana has opened upstairs at 804 Broughton St (the former location of The Livet). Featuring lots of Superflux beer and a menu that ...
Read More
January|February issue is on the stands! Pick up a copy, or read the digital version. Read ...
Read More
Since reopening in 2012, the Oak Bay Beach Hotel has been wowing guests with its top notch features. Taking extreme care to preserve details from the ...
Read More