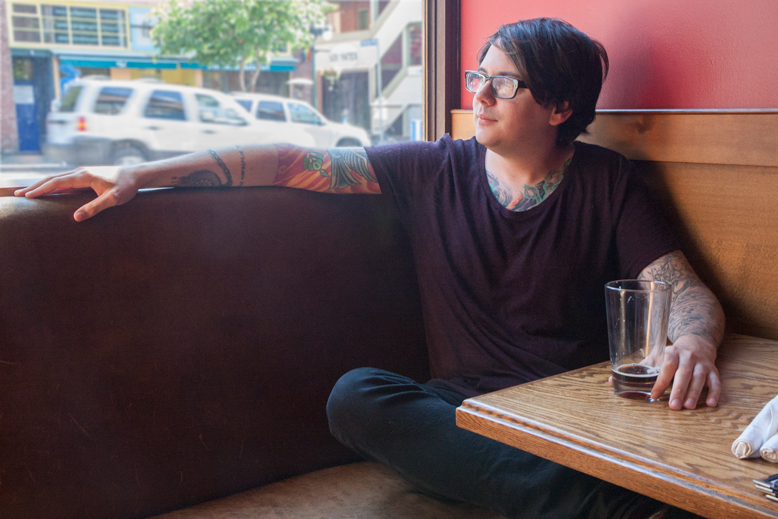 Victoria tends to wear its love for the queen on its sleeve. There’s no shortage of reminders of our monarchic roots in town, from the portraits in the antique stores, to the multiple British candy shops, to the city’s propensity for fish n’ chips. So when you tune your radio to 91.3 FM and hear a Brit speaking, it seems almost natural.

“I’ve seen more of Canada than I think most Canadians have,” says Jon Williams, evening and weekend radio host for Victoria’s The Zone 91.3 FM modern rock station. “I’ve been to pretty much every major city other than Saskatoon.” Eight years ago, he embarked on a backpack trip across the country as his first real trip away from the United Kingdom. At the end he found himself in Victoria, near his grandmother’s childhood home of Shawnigan.

“The pace just felt right. I still find myself five meters ahead of everyone I walk around with ‘cuz I’m used to walking around in London and this isn’t quite as hustle bustle, but it just felt comfortable. I think the fact that there is an attachment with England through the queen and all that kinda stuff… Victoria feels like a mini England to me. I don’t know if it’s because of my grandma but I just felt at home here on the West coast.”

Jon has made an indelible mark here in Victoria as one of the city’s most personable and relatable radio hosts. His shows touch on everything fit to print, from the world’s greatest new music to exciting advances in science, technology and space exploration. He’s also become a driving force behind the city’s local music scene, promoting tons of local bands on his show and becoming a constant presence at the city’s music venues. Radio has been Jon’s passion nearly his entire life, and his love for his job comes through in every show.

Of course, spending six or seven days a week at the station leaves little time for leisure, but thankfully Jon is a self-described simple man. “When people think English, I’m pretty much that guy, you know. I have my four or five meals that I like and I live by and I’m quite happy to live by having them until I die.” Here’s Jon’s top 10 spots in Victoria.

“I eat at Ferris’ at least once a week, I just love the chicken burger. The main thing when I first came here was the portion size, they’re very friendly with how much you get. When you work in radio you’re on a budget; my boss said he’d give me enough money to get a couple of bacon butties a week and he was right. Quite frankly the people that work here are so typical to what Victoria’s all about, they’re relaxed, they stay calm, that’s why I’ve come back here every week is because the staff are just cool people. They completely embrace whoever walks in this door and they don’t ask you to mute or change anything about what you are. The atmosphere is a big deal to me and I just feel comfortable, you know I feel like I’m in my own living room eating at my own dining room table when I come here.” 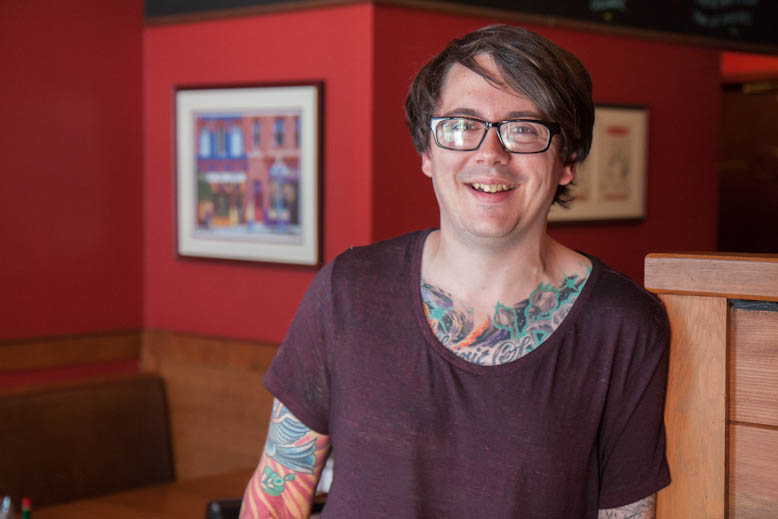 “I love Pagliacci’s. The Cabinet of Doctor Capiletti I’ve had probably 50 times in the last three years. Again the value of that place is unreal, you leave there so happy with life and their pasta is unbelievable. I usually go when they’ve got a band in there on the weekend, they’ve got their jazz band. It’s really really busy in there all the time and that’s because it’s really really good.”

“There’s also a great Thai Pho in Chinatown right by the Noodle Box there and no one really knows about it. My ex-girlfriend said I should never tell anyone about that place because whenever we go in there’s never anyone there, and it’s like, how do they make a living? The food that they’re serving is so good and it’s so cheap and there’s so much of it. I love that place.”

“It’s right across the street from where I work, so I go to 5th Street a lot to eat. My cousin worked there when I first moved here and I know all the guys in there, they were all the first people I met. Their wood-fired pizzas are pretty damn good; I usually get the margarita and throw chicken and bacon on it and it’s fantastic.” 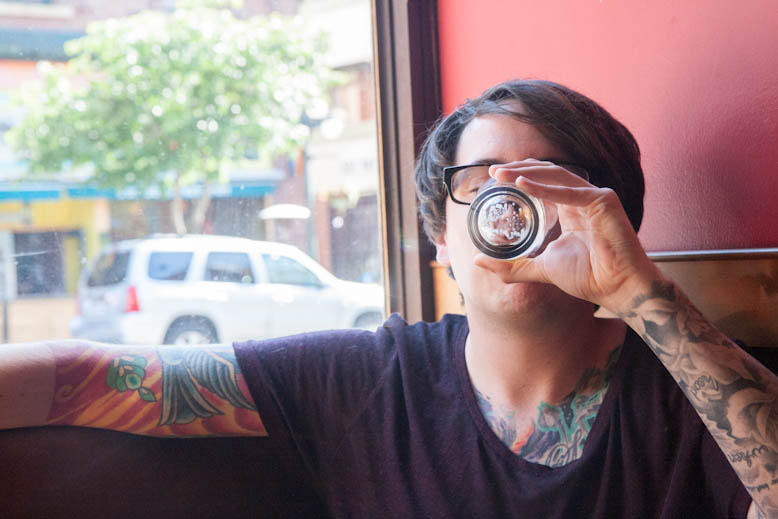 “I could mention all the record stores in town because they’re all owned by fantastic people that have incredible knowledge, but I do find myself going back to Ditch all the time. Just because again that was the first record store I walked into here many years ago before they’d expanded and I want to support them as they seek to expand because it’s so tough to sell music. It’s always full because they keep a great stock and a very wide palate of genres of music. I spend 3-4 hours in there a week, I try not to always walk out with records… I love going in there and saying right, I’m looking for something in jazz, something in funk that I don’t know, go and pick out three and then we’ll whittle it down to the one in case I know some of the artists.”

“Lucky Bar is without a doubt one of my favourites in town. It just always sounds good in there, and you can have the great space doesn’t mean you’ll always have a great sound and it’s the attitude of the people that are in there for me. More often than not they seem to get incredible performers in there… It’s to the point, it’s not the biggest room in the world but it’s got one of the best sound situations in the city, the staff in there are great, they work hard, there’s never people waiting for 25 minutes to get what they want, you know, it’s there, it’s a happening bar. I don’t go out to bars for club nights I go for shows. I’m not an EDM guy. I’m not going to f*cking take ecstacy and dance for seven hours, I go for rock shows.”

“Darcy’s do an incredible job of promoting local talent, they have live music, what is it, every day of the week, whether it’s cover bands or not. It’s a bar that if people haven’t been into yet they really need to because they might just discover their next favourite band in there.” 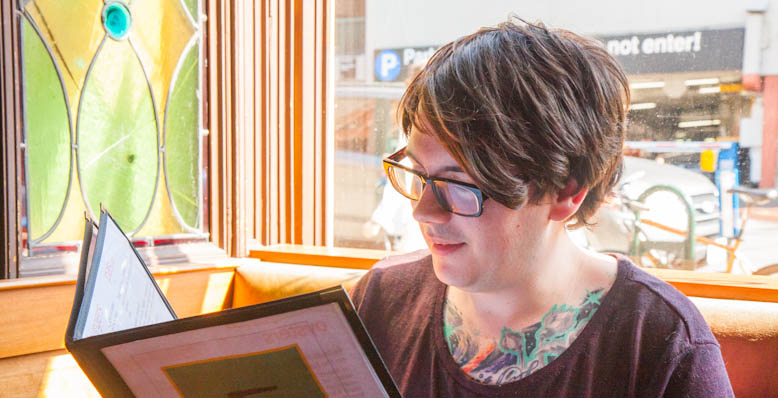 “The Zone obviously, I spend a lot of time at the Zone. A lot of people think that the Zone at 91.3 is some heavy metal, you know, punk station, a lot of people I bump into who don’t listen to the station they think it’s ridden with Metallica and Slayer and Killswitch Engage and Five Finger Death Punch and that’s not what it is, not at all, it’s a very accessible modern rock station. If you listen to the Zone you’re gonna hear real people, other than me all of them are from this town, they were raised here, they know this city, they love this city they wanna support this city. We want to expand our minds every day, learn something new, play the best new music there is out there.”

“The Garrick’s Head is a great place as well, I’ve got to say. They have pretty much every beer there is and the beer battered fries are ridiculous; if they made it beer and bacon battered fries it would be the best.”

“I don’t spend much time at my own house and that’s once of my favorite places because I have two cats and I just make a cup of tea or pour a [Hoyne] Dark Matter and relax with my cats. I love where I live, I’m not far from the Zone in a beautiful 1909 house, a previous partner of mine found it and that didn’t work out but I live with Adrian and Jesse from

Towers and Trees who are a fantastic band. The living room is all wood, original from back in the day and all there is is couches and my record player and vinyl collection. I can go play some badminton in the back garden or go inside and play some records.”